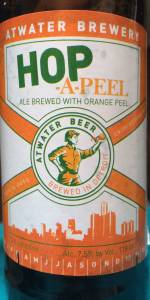 good maltiness. bitterness from orange peel is nice too. all in all a solid IPA. i'm not sure the review from Seejae that gives this beer a low rating because of oldness is valid. your fault for buying an IPA that's older than 1 month in my opinion. he rated this beer at 10 months. also, odd that you would say that you would never buy a beer from atwater based on an old IPA. i thought this beer was pretty good.

Like the deep Amber color. Pure and true
Thick and rich head disguises initial smell. Malty and plain at first.
Really good lingering taste. The longer the sip-the better. Very tasty.
A slighty foamy feel in the mouth, but not a turno-off. Unique!

For some reason, Atwater gets beaten up in reviews, but there is a lot of greatness to this beer. I avoided it because the nod to orange peels, but it is fairly imperceptible. What you have is a robustly-hopped IPA that doesn't wrestle with the hops, lingers on the back of the tongue and for 7.5% alcohol, doesn't have a boozy taste. Go and get this

Weird. I just enjoyed this at a liquor-store tasting. But I get the six-pack home, and, dang, where'd the malt sweetness go? It's all medicinal, chemical bitterness, bitterness that doesn't change from front of the tongue to the throat. If it's a "citrus" sensation, then it's citrus potpourri, or it's citrus air freshener.

I don't know what to say. I'd take this back if that were something you could do with beer you find you don't like.

I ACTUALLY DON'T MEAN TO SAY THIS IS A BAD BEER. I do realize some (easily pleased) hop-heads might stand by this brew. It's definitely interesting. But it rubs me wrong. I can't drink another bottle. (But I guess I will. What does that say about me?!)

Atwater is just one of those breweries that are hit or miss with some of their beers. Got a sixer of it at $6, and it's fresh so I figured why the hell not.

Look - Pours amber with a tint of orange. A finger of slightly off-white head form and retains itself fairly well for the first minute. Carbonation appears to be on medium with this one. Head retains throughout the drink and leaves spotty, though sticky lacing. 4.

Smell - It lives up to what it states on the bottle. The smell is very orangey, almost orange juice esque in its demeanor. This beer is definitely hoppy as well. Not over bearingly so, has a pale ale like nose to it. Faint traces of malt. Overall quite juicy, fresh and inviting. 3.75.

Taste - Like biting into a fresh orange. Orange dominates the taste and it is met by just enough malt to balance things. The 118 IBU level really shows itself with a bitter, nearly sour finish. Not much else to say on this front, but it is quite pleasant. 4.25.

Feel - Seeing as the head managed to retain fairly well, it keeps the feel very creamy. However, it is also watery with a moderate amount of carbonation and a bit on the bitter side to let sit for a long duration. 3.5.

Overall - I must admit I was pleasantly surprised by this one. It had the making of a very sessionable, easy drinking and pleasant pale ale. This is probably the perfect Summer beer and I will have no problem finishing this pack. Another example of ratings from others reflecting the fact that it isn't Founders or Bell's, because if it were, or if people could get brewery fever out of their heads this beer would have an average of about 4 and be in the 90 range. 4.

Appearance: a darkish orange color. good clarity and a small tannish head that doesn't stick around

Taste: starts off slightly like the nose but quickly turns south. all i can taste less than half way through is dull hops. no fruit no anything except a hop bite.

Mouthfeel: extremely biting. which i wouldn't mind had it had some flavor to it. very hard to finish a whole one

Overall: the smell is almost wonderful the taste is almost on the opposite side of the spectrum