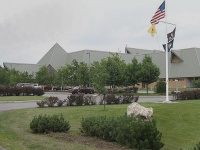 4.05/5  rDev +5.7%
vibe: 4.5 | quality: 4 | service: 4.5 | selection: 3.5 | food: 4
Drove up during the epic (at the time) Yankees/Red Sox game two weeks ago. Didn't know what to expect, since I never toured a brewery or anyplace like the before. This was a wonderful brewery to see as my first, as it was a very nice and inviting abode! Only a mile or so off of the New Hampshire Turnpike, a.k.a. I-95, and it's architctually distinctive. Pointed roof, nice roomy interior, couches, and a fireplace all add to the Bavarian-inspired look from the outside, and it's just as warm and inviting inside. Too bad they had to kick us out at 9 o'clock!

The tour was an hour long, and pretty obvious to those of us who know a bit more than basic facts about brewing ("here are the tanks, the lines, the loading docks and empty kegs", etc), but that didn't detract from the helpful tour guides who also double as bartenders and waiters/waitresses when not leading groups around the brewery. Once a week, on Tuesday, you can see the bottling equipment up and running, while touring, and the whole place is modeled on the Redhook brewery on the west coast. Thank God the east coast got a chance for their very own version of the original!

For anyone who hasn't taken a tour of a brewery, this is a great first start. A sampling is given at the end of the brew tour - complete with containers of the hops and barley used in the beers on tap. 5 taps and a full lunch and dinner menu await in the main room and the prices are very reasonable. All redhook has to do is get their non-flagship brews down to my neck of the woods!

Reviewed by Rainintheface from Florida

Reviewed by Barleycorn from Pennsylvania

Rated by Patrik274 from New Hampshire

Nov 01, 2014
Rated: 4 by Davepoolesque from Massachusetts