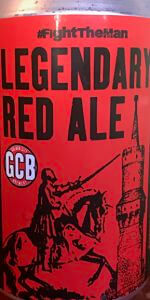 Notes: Legend tells of a land dominated by a giant and in need of a true champion. A red-haired knight rose to the challenge, and faced great peril for the freedom of his people. To honor this illustrious valor and victories, a red ale was crafted.
View: Beers | Place Reviews
Reviews: 16 | Ratings: 41 | Log in to view all ratings and sort

Can at Freshcraft, Denver, CO

A: The beer is very hazy dark amber in color and has a light amount of visible carbonation. It poured with a quarter finger high off white head that quickly died down, leaving a narrow collar around the edge of the glass.
S: Light to moderate aromas of herbal and spicy hops and toasted malts are present in the nose.
T: The taste has flavors of herbal and spicy hops and notes of toasted malts.
M: It feels medium-bodied and clean on the palate with a moderate amount of carbonation.
O: This beer has a very good balance between the malts and hops.

Misunderstood, underestimated and seldom replicated, the Altbier has the reputation of being a more simplified amber or red ale. Although the style is largely put together with the German versions of similar grains, hops and balance, its Western Europe sense of perfection, history and rusticity is noteworthy. That's what inspired Golden City Brewery going into this red Ale.

Those legendary statuses are exemplified in Legendary Red Ale by pouring a rusty amber brown. As a bloomy tan froth builds, its toasty scent carries a fine and herbal grassiness, hints of nutty sweetness and an overall woodsy character. Moderate sweetness of light honey and caramel glide across the early palate with a simple, fast fleeting sweetness.

Remnants of sweetness stay behind to welcome the taste of medium toast, pecan, faint coffee and fainter cocoa. As the ale trends spice and toasty, more of its sweetness evades and the late palate highlights the more earthy parts of the beer's toast character along with a balance of dried grasses, parsley and lemongrass with a dried pine spice.

Medium bodied and seemingly caught somewhere between American amber ale and classic Northern German altbier, the beer bridges the two styles nicely but ultimately doesn't do much to elevate either one. Sensible, drinkable and drying, the beer's demeanor is that of refreshment without giving up depth; perfect for a pairing of pizza and buffalo wings.

Very solid altbier, my first beer from GCB. Very impressed, will definitely keep this beer around as a great table red.

This is a well done Red. Great amber color, very smooth taste and texture. Certainly above average. There is an amazing dance that goes on between the hops and malt when Altbier is made and this beer does not disappoint, a little more malty than I would have expected, but excellent.

22 oz. bottle was poured into a tulip glass.

Appearance: The beer poured a half finger head. Crimson red is the color with great clarity and signs of carboantion coming up through the glass.

Smell: Very bready and malty. Only has a sweet honey aroma.

Overall: This is the first of three bottles brought back from this little treat of a brewery in Golden. I was thinking it was a red ale, but after reading the descrition, Altbier it is. It follows all the traits of the altbier group, but wish I was more experienced with the style to understand this beer out. Still a good beer and was worthwhile to drink.

Aroma was malty and sweet. Some floral and earthy hop presence. Touch of roast.

Taste had some good maltiness with a touch of roast in the finish. Earthy hop flavor with a floral bitterness. Some light sweetness. Nothing really impressive in here. Some light caramel and subtle chocolate flavor.

Overall it was a decent. Tame flavor and lack-luster appearance wouldn't make me want to purchase anymore of these.

Another one from the Golden City tasting. Poured from the tap a beautiful dark copper color, clear and nicely carbonated. The nose was biscuity and fairly inviting. On the palate, caramel malt nicely carried flavors of hersheys chocolate through to a nice lingering bitterness. A perfect spot on alt style beer--good, but not my favorite style.

22 oz bottle. The Legendary Red Ale pours a reddish amber with a frothy off-white head that quickly diminishes to a bubbly collar.

The aroma is sweet nutty malts, a little cola, burnt leather and maybe a touch of cinnamon.

The flavor is sweet buttery nutty malts and cola. The mouthfeel is medium bodied.

Overall, it's very malt-forward and kind of strange and not quite to my liking. It seems to become more palatable as it warms. Fort Collins Brewery's Retro Red is very similar in style, but I liked it better.

Pretty good, though not revelatory.

Pours a nice amber with a nice but quick-dying head. It has almost no aroma, however. It does have a pleasant roast malt flavor, though no hop bitterness. It has a satisfying malty finish. Clean, highly drinkable.

Too many colors in the name. Pours a reddish color with a dark orange hue. Decent clarity with a slight haze. A soft off white head with limited head and retention. Even with a good pour. Not much lacing to speak of either

The nose is limited overall. Some good malty notes with a grainy and chocolate notes. There is a slight astringent note but not over the top. Some minor sudsy notes on the backend as well. Some citrus hops with a orangy backing to it.

The taste comes out more versus the nose. The malt comes out nicely with a more English base malt flavor. There is some chocolate and some astringent notes, with a slight ashtray finish that is light but still a deterrent. Some alcohol notes as well, but not over the top. There is a light bitterness but not much on the finishing hops. Nice clean yeast flavor. Some sudsy finish as well. Some minor mineral notes but was light.

The body is light for style. Some dry finish and low carbonation. Some astringency issues for a red as well as some brewing faults, but easy enough to drink.

Taste: The beer leaned to the sweeter side of the balance without being cloying and over done. The balance is also that of the malt. I taste a mild tang from the Munich that is offset nicely by the earthy hop bitterness. Finishes with a mild buscuity aftertaste.

Drinkability: Good. This red is quite tasty and quite malty. Still not to heavy to impede your ability to drink more than one pint.

A dark ruby pour into a pint glass. Head foamed up rapidly at first, developed into a soapy head, then turned away. A quick swirl of the glass got some head back, but not much.
Rich sweet malt came through in the nose, but not very strong. Served really cold, this may have been a bit detrimental.
Easy going taste. slight roasted malt and baked caramel. Not strong, but not bad. Makes drinkability better, yet it does kinda where down...22oz bomber is big for this beer.

Not much head at all. Slight bubbling that receded to the edge of the glass. No lacing. I tried hard to get a head on this. Dark orangish-red to brown. Slightly cloudy.. Almost looked like a glass of tea.

Strong sweet honey like smell with a slight orange-citrus almost orange drink hint to it.

No really distinct flavor jumped out at me (I am a newb to reviewing, but not drinking good beer). The sweet malt honey like flavor came out on the tip of the tounge with bitterness on the back. A bit grainy As the beer warmed the bitterness disappaited, and a little more roasty, bakers chocolate came forth.

Mouth feel was good. low carbonation and went down easy. Very drinkable. I could sit down for a session of this beer even though it was lacking many distinct flavors. I'll buy more.

Pours a half-finger tan head over a crystal clear radient red-copper liquid. Gorgeous. Smells chocolatey and nutty. Like a brown asle, not a red ale. Also smells dry. Tastes of chocolate with supporting caramel. Nice revival of sweeter chocolate in the aftertaste. Further sips reveal a hint of dry tart. Perhaps some hop bitter. Co-humulone grassy is gentle. Hop flavor? I don't get a strong hop flavor, but if I had to buess my guess would be fuggles. Md body and moderately carbonated. There was a cool creamy character to the body that I just loved. I could drink this one quite often. I see this beer edging toward the brown end of the red ale category.

The beer pours a dark ruby red color with a thick frothy offwhite head that fades to lacing. The aroma is awesome. It has a grainy, pale and crystal malt scent along with some chocolate malts as well. The aroma is very bold for a red ale. The taste is good. It has a smooth, grainy pale and crystal malt flavor that goes down easy and finishes light and husky. The mouthfeel is fine. It is a medium bodied beer with adequate carbonation. This is a very tastey red ale. I can't get enough of the aroma; a good drinker.