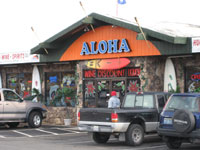 View: Place Reviews
Reviews: 4 | Ratings: 5 | Log in to view all ratings and sort

Thanks to Beerandraiderfan for the suggestion!

Had a wedding in Gardnerville,NV this weekend so took 15 min drive (crazy slow sleep limits) and headed over.

Atm- Well it is Aloha for a reason. Workers say Aloha when you walk in and has a lot of tiki around with some surfboards. Nice open space with some decent sq. ft.

Quality- A lot of good beers were at this place and a little shocking actually. Some hard to find DFH, Fantome, Bruery amongst others.

Service- Very helpful sales staff and quite pleasant to talk to. Like what they do and willing to answer questions.

Selection- This was more a let down than any other. Lacking a selection of Nor. Cal, NV and western locals. Had some knee deep, tenaya and 6rivers but that was about it. Wanted to see some single 12 oz to bring home.

On my recent trip out to the Reno area, this was easily the best place to stop for beer. The Hawaiian theme is present throughout the store. It may be one of the few beer stores I have been to that has atmosphere. The service was super friendly--wanting to discuss beer and helping us find releases. The stock seemed to be pretty well rotated. They also had full or close to full line ups of breweries and several bombers. Mammoth, Deschutes, and Alaskan were all represented. If I am ever in the area again, this is the place I am headed for right away.

Been checking out Aloha since they opened, oh, I would guess around 5 years ago? Great wine selection. Lots of stuff you won't find in the area for the most part. The whole front room is wine, the back room is 1/2 and 1/2 wine and beer usually.

Service is great, they quickly ask if you need anything, and if you're just looking, they leave you alone, if you wanna talk shop, they usually know what is going on, and the people whom I suspect are the owners, are usually there and helpful.

Beer selection is pretty rounded, they usually have the medium to large regional breweries seasonal stuff and of course all the year round products. Just need someone to break this region open, get some of the smaller breweries from CA stuff in here: RR, Alpine, Port and this would be an A rating.

I finally got a chance to visit here when visiting my folks (who live in Carson City) after seeing it over a year ago- they have huge Chimay and Schneiderweisse flags flying from the roof, so it can't be all bad, right?

Their focus is wine, but they also have extensive fine liquor and beer. Hawaiian-themed (everyone says aloha when you enter and and mahalo upon purchase, lots of grass hut kitsch, etc.) location. Two rooms, the front is a well-laid out wine section, with a room in back for liquor and coolers in the very back for beer.

Their Belgian selection is limited to Chimay, Lindemanns and Thelonious Monk, but they also have a decent selection of northern California/Oregon beers. Some examples are Deschutes, Anchor, Sierra Nevada, Lost Coast, etc. The biggest selection of New Belgium I've ever seen. Kona Pipeline Porter (limited edition) in cases- first time I saw that, weeks before its arrival in SoCal. They seem to have numerous beers from each brewer, rather than just the most popular. A moderate selection of English (Samuel Smith & Youngs lineup) and a couple dozen German beers (I didn't take notes). Also found Ruby Mountain from Wells, NV., which I had never heard of before. Of course it also has all the usual macros, but the majority is craft and imports.

Service was very good, very attentive, although I didn't get a chance to talk to them about beer. They do weekly wine tastings and occasional beer tastings.

This fills a nice hole in the Eagle/Carson Valley area. It's not a world class beer place, but it has a solid foundation of craft and imported beer- the best place in the region I could find.