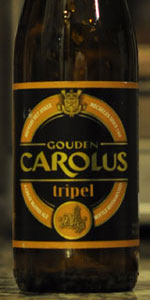 Notes: Full graceful tenderness, with a clean and neat taste, this ale will enchant you: matured in the bottle, exclusively obtained from pale malt, highly fermented and 100% natural. With a full-bodied flavor that still works thirst quenching, thanks to a balanced hoping. This pleasant golden ale is preferred by all who love heavier, somewhat seasoned and refreshing ale.
View: More Beers | Place Reviews
Recent ratings and reviews. | Log in to view more ratings + sorting options.
Ratings by thehyperduck:

Pours a hazy, muddled golden-peach colour, initially generating nearly two fingers of soapy, bright white foam at the surface. It steadily dissipates over the course of the next five minutes or so, leaving a creamy-looking collar and thin cap behind in its wake. A quick swirl manages to give the head new life, but only briefly; this is also the only way I seem to be able to get much in the way of lace. It might not win a tripel beauty contest, but the aroma is absolutely to die for. I'm getting a wallop of stone fruit on the nose, especially apricots and juicy peach, with distinct notes of lemon peel, orange zest and white grape. Subtle banana esters, clove phenols and candi sugar sweetness, with grassy hay and some spiciness.

I love the taste of most tripels, and this one is not an exception to the rule. Grainy malts, candi sugar sweetness and banana are apparent right off the starting gun, though the stone fruit and citrus elements noted in the aroma are somewhat subdued here. Hints of apricot, apple skin, white grape and orange peel surface briefly, only to be overcome on the back end by this beer's assertive yeasty qualities - plus a little help from some grassy, spicy hops. Finishes spicy, with suggestions of clove, white pepper, and a light, bready malt sweetness. Not particularly dry, though the aftertaste does have an astringent tendency. Medium in body, with fiercely potent carbonation that prickles the surface of the palate and foams up in the mouth. I like a good, crisp bite from my tripels, but this bottle goes a little overboard. No biggie; it happens sometimes with these bottle-conditioned Belgians - it's still an exquisitely well-crafted beer that completely masks its strong alcohol content.

Final Grade: 4.38, a brown-nosing A grade. I'm far from impartial when it comes to tripels - particularly when it comes to the ones which have been imported directly from Belgium. So it really shouldn't be surprising when I state that I highly recommend Gouden Carolus Tripel, or that I find it to be one of the finest examples of the style that I've had in recent memory. It's certainly not flawless - with the unnecessarily foamy mouthfeel being my main point of contention - but the fact remains that I'm still really enjoying my glass. It would be a crying shame if this didn't return to the LCBO at some point, ideally in single format.

Pours a somewhat hazy straw yellow with a giant fluffy head that collapses into a large, crunchy-looking mountain of head, right in the center, with some gorgeously webby lacing along the sides. Smell is hay, a little funk, a little spice, definite yeast aroma, surprisingly not getting much of a banana or clove, though the spice might be leaning in the clove direction.

Taste is very slightly banana-fruity, very mildly spicy. As it warms up, I get a bit more banana and more of an earthy flavor. There's a bit of bitterness to it, which I have a hard time pinning down -- more nutty than green, but not quite nutty. Maybe it'll come to me (closest I can get is almost a bark flavor?). Clove is definitely getting clearer.

Mouthfeel is surprisingly light and dry and clean. Overall, this is a very nice tripel.

4.35/5  rDev +5.3%
look: 4.25 | smell: 4.25 | taste: 4.5 | feel: 4.25 | overall: 4.25
750ml bottle. Label is stamped for production date of '07/13/21'.
Clear, straw colored body. Big show of uprising bubbles. Voluminous head, which takes a few small pours to fill the glass. Leaves clumps of lacing.
Aroma of banana esters, with a touch of cloves. Sweet honey and peach fruit. Also apricot.
Taste is even more expressive than the smell. Big bready malts, banana esters, and pear, peach, and apricot fruit. This is both sweet and slightly bitter. Dry in the aftertaste, with the yeast, malts, and fruit.
Dry and slightly tart mouth feel. Each sip is quick and to the point. High level of carbonation, with beautiful billowing heads.
So nuanced and very expressive at the same time. High mark for the style. Higher ABV% is well hidden, but results in a warming experience. The chore to drinking this beer is the waiting for the head of each pour to subside.

This one pours a hazy golden yellow color, with a small fluffy head, and lots of lacing.

I'm really beginning to like tripels more with time. This is an excellent version, one of the best that I've had. There's a nice doughy sweetness, with some clovey and grassy bitterness. There's a lot of dried fruit character - banana, pear, peach, etc.

This is medium bodied, pretty creamy, with a very well hidden alcohol character. It's quite drinkable,

This is as good as it gets for this style. This is tremendous.

Reviewed by BGDrock from Canada (ON)

Reviewed by octortus from Canada (ON)

Reviewed by BelgianHops from Belgium

Reviewed by JudgeRoughneck from Louisiana

Reviewed by MichaelDaMac from Tennessee

Reviewed by MissouriMule from Missouri

4.8/5  rDev +16.2%
look: 5 | smell: 5 | taste: 4.5 | feel: 5 | overall: 5
This nails the genre. Judging by the fact I picked up four for a fiver, it had been on the rack a while, so YMMV. It pours cloudy with a tall and persistent head. There is grass and spice in the nose, corresponding to hay, spice, and floral notes in the taste. The mouthfeel is full and round, with the sharp carbonation acting as an excellent countervailing force. The only detracting element is the aftertaste, which can make for a slightly astringent and vaguely stale bitterness, albeit short-lived. Again, though, my samples may be long in the tooth.
Feb 05, 2020
Rated: 4.48 by jmbeerdude91 from Arizona

4.07/5  rDev -1.5%
look: 4 | smell: 3.75 | taste: 4.25 | feel: 4.25 | overall: 4
L- Pale amber, almost clear (minor sediment left in bottle), pours with 1Cm off-white head. (ps. holds well/forms lacing).
S- Woody and leathery.
T- Woody, almost like conifers, into dry but pungent brightness on the palate. Once my palate has adjusted to that I begin to notice the gentle spicing which becomes more prominent as the beer warms a touch.
F- The dry/bright aspects do a thorough job part-masking the 9% ABV. Usually I'd expect a 9% Tripel to be rich/robust/punchy, this seems more subtle. It has major presence just the hefty 9% is discreet.
O- Superb, nothing 'wrong/out of balance' to note. In my view it's on the dryer side of the spectrum of Tripels.
Bought from Beerhawk/UK. 330ml bottle (lable now mostly cream with gold lettering). BB: 28/05/2022

O: Decent beer to have on a cold winter day I guess but nothing I will look for again.

Overall - this was a tripel that I enjoyed, they orange flavor really came through while being in harmony with the other flavors. Recommended for lovers of the style