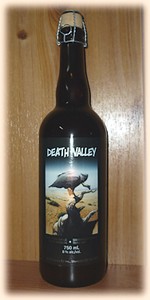 Reviewed by jrenihan from Canada (ON)

Beer is golden/amber in colour, with an enormous white head. Excellent retention- head just never goes away. Lots of lacing.

Smell is quite hoppy, with grass, light fruits and pine resin all present. Caramel malt and yeast are there as well. The scents all sort of mush up together, a bit messy.

Taste has lots of light fruits and notable hop bitterness. Pine resin and grassy flavours. Hops provide a bit of a spicy flavour. Yeast and some caramel malt. Booze is more noticeable than I would expect for an 8% brew. Not bad, but booze is too prominent and yeast flavours could be nicer.

Overall, not bad but not a beer I would seek out again.

Reviewed by Conrad from Canada (ON)

Reviewed by CAMRAhardliner from Canada (ON)

A nice Belgian IPA. Very balanced with a nice Tripel like yeast profile. Worth a try.

Reviewed by Poljazz22 from Canada (QC)

3.7/5  rDev -0.8%
look: 3.5 | smell: 3.5 | taste: 3.75 | feel: 4 | overall: 3.75
Pours golden slightly opaque with a 2 in white head.Some lacing with a white ring after a few minutes.
Lots of hops and Belgian yeast.
Taste of floral and earthy hops with some malty sweetness.
Well balanced between the bitterness of the the hops and the malts. Some pepper some sweetness and some decent mouth feel.
I quite like this and it makes a change from your typical IPA.

Reviewed by GingerFan from Canada (QC)

Reviewed by NeilW from Canada (ON)

3.7/5  rDev -0.8%
look: 3.5 | smell: 3.5 | taste: 3.75 | feel: 4 | overall: 3.75
This is a pretty decent beer and fairly typical of a lot of the Quebec Belgian style beers. I poured the first glass from the bottle after it had been stored on it's side - this caused a lot of the sediment to end up in the pour. The second glass was poured after the bottle had been stored for about half an hour upright in the fridge - and most of the sediment stayed in the bottom of the bottle.

The first pour, not surprisingly had a more yeasty taste - not overpowering nor unpleasent but it did change the character of the beer. The beer pours a somewhat cloudy copper colour. The nose has aromas of bread, some citrus, and malt. Despite its name it is not overly agressive in flavour. It has a decent amount of hops, and a sweet long finish. The carbonation is excellent with a nice mouthfeel. This is not an overy heavy beer, despite its higher alcohol content. The carbonation leaves the beer crisp and easy drinking.

Hazy yellow with an enormous amount of sediment.
Crazy pasty with belgian wang in the taste.

Not very enjoyable at all.


Pours a coppery brown with a persistent khaki head that is pretty substantial, lots of scummy lace. The aroma is of a rusty puddle with some leaves in it. Flavor kicks it up a notch with a bizarre bready-sweet 'pop' that descends into dirty, woody hops with lots of spices, soap and an old rag thrown in for good measure. The flavor melds with the mouthfeel as it becomes increasingly astringent to the point of being unpleasant. There is active carbonation and it is medium bodied, but the main thing you feel is a bitter, acrid hum in your mouth that sticks around a while.

I would absolutely not have this again. It was flat out terrible. Ordinarily with a beer this bad I wouldn't even review it because it would be infected. This was not infected, it was just a mess of big flavors and feeling in a whirlpool of bitterness. No off flavors and I drank it with a friend who actually seemed to really like it.

All I can guess is that it was incredibly old (bought from a grocery store that doesn't care about beers and is a good spot to get "pre-aged" Sophie and Unibroue). HOWEVER, the best before date is in 2018! Seriously, Brasseurs RJ?!?

For a beer that exclaims "hop lovers rejoice!" the aroma has a lot of biscuity malt - and an underwhelming amount of hops. They call this a "triple hop" beer, presumably because it uses three varietals (Bravo, Saaz and Amarillo) and not because it has three times more hoppiness. It doesn't.

Certainly not in the bouquet; the taste delivers a little more. Orange blossoms and lemon/lime bar mix play more prominently on the palate, though we're still in the shallow end as for as depth of hop flavour. Given the varietals listed it's a surprise there's not more grassy florals or tropical fruit notes.

Or perhaps not given the presence of malt and yeast. For a Belgian style beer with an American twist this has an awful lot of British character: dough, bread, and biscuits from the grain as well as marmalade- and apricot jelly-like esters from the yeast. It's alright, but not exactly what I was expecting.

That pretty much sums it up: Death Valley has a pleasing profile - one with both candied citrus rinds as well as sweetish, doughy malt - but it's not necessarily what I'd reach for when hankering for a Belgian IPA (or any kind of IPA for that matter). As is typical for an R.J. offering, this is pretty mediocre beer.

So the look of it: Orange with about 2 fingers of head.

The smell of it: Citrus, orange a touch of hops but very light.

The taste of it: Fruity with some citrus, orange. A touch of hops on the aftertaste but very light for an IPA. The mouthfeel is just a bit too much Alcohol burn to it. You feel it when it goes down. Nothing to offensive but just wanted to mention it.

So overall would I recommend it? For sure, this is a nice Belgian IPA. Les brasseurs RJ does make good Belgian Beer and this one is worth picking it up.

Pours a hazy golden-amber colour, generating nearly a full inch of creamy, white froth at the surface. This one's head lacks the retention that the style is legendary for - it thins out over the next handful of minutes until only a wide, creamy collar is left, seguing seamlessly into the uninterrupted curtain of delicate lace that has been left pasted to the glass above it. Yeast is the most abundant force in the aroma, which includes notes of bubblegum, doughy malt, sugary sweetness, and some floral, spicy hops. It does smell vaguely funky, in a stinky-feet sort of way, and that is in no way a compliment. I did serve this a bit cold, but the nose does not open up significantly as the glass warms.

This tastes like a reasonably well-made example of the style, but there are a few facets to the flavour profile that bug me. Firstly, it is quite sweet - caramelized sugar and some grainy, doughy malt flavours come through initially, with the former providing a persistent, saccharine background throughout the profile. Notes of apricot, red apple, candied citrus and banana also show up, but things take a decidedly bitter turn toward the finish. Its exact nature is hard to pin down - a bit pithy, rather spicy, and somewhat floral - continuing on briefly into the aftertaste, where it is soon displaced by a noticeable (for 8%) boozy warmth. Medium in body, perhaps approaching the fuller side of that category, with zippy carbonation levels that provide a crisp bite and a frothy, smooth mouthfeel. A pretty good summer sipper.

Final Grade: 3.78, a worthy B+. Death Valley makes for quite the enjoyable quaff - though not one nearly as impressive or memorable as you'll get from the kingpins of this style. I do like this beer, but relatively speaking, there's nothing especially remarkable about it - that is, other than the price point, which is low enough to allow this bottle to remain very good value, whether you think it's a 'world-class Belgian IPA' or not. There's no reason whatsoever not to give this one a shot - and as for myself, I'll probably be buying at least one more bottle for short-term cellaring.