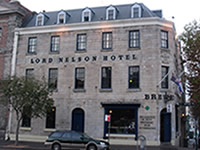 Great historic building in Sydney's historic Rocks precinct so for me this place gets a headstart. But a great place for a beer, authentic fitout, good range, including their own. Yet to eat here.

We stayed at the hotel here before and after doing an Australian cruise. To have a pub and brewery in the same place is a wonderful idea. The staff at the hotel were so friendly and accommodating! Lauren, at the registration desk, was so helpful in getting around on our first trip 'down under'.
As for the food and beer, Excellent! Enjoyed all the brews, but the Nelson's Blood Porter and Old Admiral stood out for me, while my SO enjoyed the lighter ones, 3 Sheets and Mon Cherie Saison. Rich and flavorful were the dark beers, and the fish and chips outstanding! Even the Aussie version of pizza was very good, and that's something coming from the NY/NJ area.

This place, which is Sydney's oldest hotel, is a must try if you are in downtown Sydney, as is nearby (sort of) Redoak. If you're a beer nerd, don't skip out on these two places!

This place is awesome. The folks that run the place are kind and friendly. They brew all their beer on site. They have a nice variety of beers on tap, but if you want a strong beer then go somewhere else. You really should give these beers a try if you are ever in Sydney. I had a red ale and the 3 sheets. The food was excellent also. I had the shepards pie equivalent which is typical local cuisine and was amazing. This venue is on a bike route and is nearby the harbor so it has a great location. I loved this place!

Beer Safari in Sydney. Seemed important to check out Lord Nelson. Claims to be oldest Hotel in Australia (1841). Nice walk from the Rocks core to bit on the edge through cool residential neighborhood. Pubs/bars in Australia are often named "hotels" and "inns" as part of old legislation that required rooms for people who may need them after a night of tipping cups.
Found the LN to be a very nice pub with great atmosphere. People were very pleasant and helpful. 14 taps and creative food menu including interesting versions on salads, steaks, curries, appetizers, etc. House beers were British in style and essentially revolved around MOR Pale Ale. Unfortunately their Porter was off that night. Beers were serviceable to match the quaint British feel, but nothing to speak of. Overall very nice experience. But many better places for beer in Sydney.

Nice place though, with a good selection.

A lot of history at The Lord Nelson. Storied as the oldest pub in Sydney. True English fare and brew. Great atmosphere and true English style ales. Great location at the top of The Rocks. Offerings include their own plus a lot of the Australian favorites.

Good old fashioned quality English ales are what the Lord Nelson does best.

The food is also very good, with mostly English type fare to match the beers. Beers are brewed on site and nearly all are full of flavour and ones you could happily drink over and over again during a lazy afternoon/night.

Highly recommended if you are in Sydney.

An old sandstone building with timber everywhere inside, including well worn timber floors. Nice lantern style lights go with the obvious nautical theme. Huge timber beams in the ceiling from which a barrel and many nautical flags fly. The walls are adorned by old brewery photos as well as honour boards for sailing races that the pub used to run. The place gets a good buzz about it with all the hard surfaces as the pub fills up, but is nice and relaxing at lunchtime midweek to just chill and have a beer when it is less crowded. Expect for it to be busy all weekend and on Thursday and Friday nights.

Service was ok, nice and polite and efficient. The person after me was after the beer closest to an IPA and she suggested Trafalgar would be the closest but acknowledged it wasn't on at the moment. So solid beer knowledge.

The beers have a British slant to them, which should come as no surprise given the name of the place. Currently 11 taps devoted to beer, 7 for the house brews (Quayle Ale, Trafalgar Pale, Nelson's Blood, Victory Bitter, Old Admiral and Three Sheets, plus the current seasonal One Eyed Rye), though Trafalgar, Nelson's and One Eyed Rye were not pouring today. Coopers Light is the low ABV offering, while Coopers Pale, Coopers Vintage and Paulaner are the others. 2 taps for cider. The Coopers taps aren't surprising as the pub has always been a good supporter of Coopers. As the story goes, they once sold a cellared version of Coopers Extra Stout which was so well received it prompted Coopers to cellar the beer themselves and release it as Special Old Stout.

The beers have their ups and downs and the brewery seems to have a pretty high turnover of brewers. Also if you are into Rum, it has one of the better pub selections in Sydney and likewise for single malt Scotch. The pub itself is one of the best in Sydney for character. If you like crowds, pick your moment and if you like space, also best to choose the best time to visit. Worthwhile visting if you are in The Rocks.

The Nelson is basically a Sydney Institution. Set nicely back for the main area of the Rocks, it benefits by getting busy but not too busy. In on a recent Saturday night at seven, the place was full, but not overflowing, and a great vibe, once you opened the door. The fire was blazing (well, by Aus standards) giving a wintery feel to the place. Lovely sandstone walls abound, and the brewery tanks sit round the corner - I am not sure if this is their whole brewing operation tho.

The beer menu is easy to see and read - chalkboards above the bar do the job nicely. It's also not too extensive, tho other taps feature Coopers and also Chimay Blanc. English style ales of varying strengths are the theme.

Just the right mount of items hang from the ceiling to make it look like A Pub, with a real nod to British Heritage.

Let's put it into perspective in Sydney. If fills a niche - it may not have as many beers as Redoak, nor be as plush. It has a better vibe than the Taphouse, and is older. It doesn't have family-friendliness like say 4 Pines. When you do these comparison it becomes clear that the current crop of Sydney's beer bars are apples and oranges. none are alike. This is A Good Thing.

Last and sadly least, the beer is served too cold.

The Lord Nelson Brewery Hotel in The Rocks, Australia
Brewery rating: 3.53 out of 5 with 186 ratings