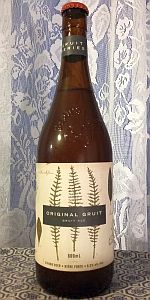 Appearance: Poured with a finger of head that did stick around for a while, but did not lace very well. The body is a grainy filled cloudy bronze that delicately walks the line between amber orange and brassy yellow. Amply slow carbonation in the body.

Smell: It certainly has a herbal kick to it as a tea, rosemary and some kind of spicy note is present. Warming really helped to bring it out, but even then the potency just isn't there.

Taste: Herbal, mild but not so mild that it isn't interesting and not very bitter. Everything most gruit beers are, and in my opinion should be. Starts with a rosemary infused toffee malt that turns to a brief floral touch finishing it off with a touch of bitter tea taste.

Mouthfeel: The aftertaste is very well done, as it's a pleasant mix of the entire beer, and it doesn't cling excessively or build on itself. Additionally, the carbonation has a presence throughout the entire beer. The weak point though is the transitioning at the mid-point of the beer. A brief flash of a floral note before the bitter tea taste took over was a bit disappointing.

Drinkability: Mild, light bodied, easy to drink, flavourful, easy on the system and all around solid. That said, it walks an odd line. It's not quite refreshing enough to be that summer, deck guzzler (and for the price it really shouldn't be) but not quite potent enough to be a savouring type. Still solid stuff here regardless.

Final Thoughts: I am a big fan of Gruit beer, and this one is no exception. It's a much milder take on the style then their other more well known Gruit, Bog Water, but it is still an excellent addition. This to me, is the benchmark of what a simple, mixed herb Gruit tastes like. I'd like to think is probably how most Gruit was back then, but in truth it likely varied wildly from region to region depending on what herbs were available. If you wanted to introduce someone to Gruit with something fairly mild, inoffensive but still interesting (and communicated it as such) then this is the beer you want. If you want a Heather, Berry or Herbal Tea explosion, this beer is not it (which I'll be honest, I enjoy a bit more, but I really love the style). Regardless of though, it is worth a thumbs up in my opinion and certainly worth a shot if you have never had Gruit, but don't want to dive off the deep end.

Pours a clear golden-yellow colour, fitted with a puffy, soapy crown of head roughly one inch high. It seeps away gradually over the next 3-4 minutes or so, leaving behind a wide collar of foam, as well as a few patches on the surface. Nothing sticks out in particular about the aroma, which is comprised of a few subtle, flowery bog myrtle notes, some herbal qualities and a faint hint of caramelized sugar. It opens up a little as it warms, but it remains a quiet, reserved scent until the end.

Not a bad little gruit at all - in fact, it might be one of Beau's' better ones yet. There is a clean, gritty, grainy pale barley malt character to the profile, with notes of nectary sweetness and apples coming through by mid-sip. It quickly becomes greener from then on, with some herbal, grassy, almost spicy flavours and a floral bitterness which rounds out the latter half of the sip. Finishes with an odd, vegetal sweetness that swiftly dries out, due to the herbal astringency. Light-medium in body, with relatively lively carbonation that results in a prickly mouthfeel. Unlike most gruits, I could probably drink two bottles of this in a row without the second one being a chore.

Final Grade: 3.92, a B+. Beau's Original Gruit is aptly named - if you are a traditionalist who longs for a gruit that includes only the bare-bones ingredients which (loosely) constitute the style, there's no need to look any further. I wouldn't consider this an exciting beer, but it's well-crafted and balanced, and certainly easy to enjoy for what it is. I prefer this over their Bog Water, but not to an enormous extent. At $5 and change per bottle, this Beau's brew won't break the bank, and I'd probably consider breaking out the wallet to pick up another (should another batch be released at the LCBO).

Cloudy pale golden yellow with a fizzy finger of white head that steadily fades away.

Sweet then tart from the herbs, somewhat floral as well, like lavender. As it warms more aromatic herbal flavours emerge, a bit like rosemary. Malty golden grain toward the end and green herbal bitter at the finish.

Obviously the herbs are meant to be the highlights here and they are - a bit floral and quite a bit bitter herbal, its an interesting flavour profile if not an entirely tasty one. Nice malt backbone but its really there to balance the herbs. Overall a nice experience but I wont reach for one again right away. I would be interested in tasting different combinations of herbs to see what profile they bring, could be a really interesting series.