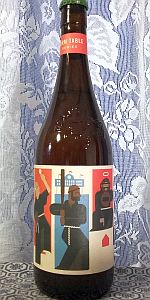 Draft: Poured a golden color ale with a medium foamy head with OK retention. Aroma of light residual sugar and fruity ester is enjoyable enough. Taste is a mix of Belgian malt notes with some residual sugar notes and some fruity ester. Body is about average with good carbonation. Easy drinking Belgian ale with maybe a tad too much residual sugar.

Pours a mostly-clear sunny blonde colour, producing two fingers of fluffy white froth at the surface. Little flecks of sediment contribute to a slightly hazy complexion. The head recedes steadily over the next couple of minutes, depositing a full curtain of lace on its way down; a creamy collar and patchy, filmy cap are the other remnants. Looks good, but the aroma is another story - I am getting a lot of sulphur and vegetable water, which kind of reminds me of canned peas. Somewhat grassy, with grainy, bready pale malt sweetness and a hint of orchard fruit. Not a particularly pungent aroma, but that vegetal note is not what I want out of this style.

A decent light ale, but nothing that I'd write home about - on the plus side, those vegetal notes do not carry over into the flavour profile. This pale ale has a gritty, cereal grain and bready malt sweetness to it, with grassy hops that begin to shine through on the back end. Wet straw, Belgian yeast, clove and a slightly earthy, floral note wrap the profile up well; off-dry aftertaste. Light in body, with relatively restrained carbonation levels for the style. The mouthfeel is soft, smooth and wet, and the drinkability is fairly high.

Final Grade: 3.37, a B-. This is the second bottle of Beau's Farm Table Patersbier that I've cracked over the last week (I like to give new beers more than one chance, at least if they're affordable). I wasn't super-impressed the first time 'round, and this re-sampling hasn't shifted my opinion much - it's an unremarkable, passable offering which cannot really be considered anything too special. One of the weaker offerings I've tried from their Farm Table series; I can't say I've had all that many 'patersbiers' specifically, but I've had plenty of Belgian pales and the imports mostly blow this one out of the water.

600ml bottle - part of a few new offerings from this Ontari-ari-ari-o brewery to recently show up in Alberta.

This beer pours a hazy, pale golden yellow colour, with three fat fingers of puffy, loosely foamy, and fairly bubbly off-white head, which leaves some random blotchy lace around the glass as it quickly subsides.

The carbonation is average for the called-for style, via is tacky frothiness, the body a so-so medium weight, and sort of smooth, as the edginess of both grain and yeast alike don't play well in the sticks, it would seem. It finishes trending dry, the same essences from the mouthfeel carrying through with their burgeoning plans.

Overall, this comes across as a rather disjointed affair, with the adherence to the given style not particularly tightly woven. At any rate, not a bad brew, per se, but with some strange flavours that really don't offend my better sensibilities, but neither do they engender in me the desire for another serving.

Bottle from the lcbo for around $5.

Straw and hazy with lots of carbonation, and 6 fingers of white head.

Smells of coriander, peaches, and dill.

Love the label and the whole theme behind this brew, as well as the fact its kept at such a low ABV. Easy drinking but interesting. Tastes like an authentic Belgian brew. Drinking at Muskoka, Dec 19th, 2017.

Appearance - mostly clear pale golden color with just a smidgen of haze. Nice little finger and a half if rocky white head, good retention and lots of lacing left behind from this brilliant white head.

Smell - rather grainy nose, not much in the way of yeast, a bit of a musty aroma as well.

Taste - nice, light and flavourful beer. Some grainy flavours, with a certain creaminess in the flavor. A little bit yeasty as well with low levels of bitterness. A fruity sweetness lingers underneath the primary flavours.

Overall - Beau's patersbier is kind of an interesting beer. It's sort of a grainy, less yeasty Belgian pale ale, with a creamy feel, I can't think of many beers like it, but it's a nice test as the warmer weather comes forth.

Hazy straw color with low activity. Deep cloudy with the yeast. Foamy and slightly creamy light beige 2-3 finger head, lasting around 10 minutes, with poor legs and a decent swirl effect. Flavors of lemon, sweet grains, wheat, spices, Belgian yeast, Wild yeast, caramel, and floral hops. Slick and oily medium to full body with strong crispy carbonation. Light to medium strength finish, sharp and dry, a slightly vinous with citrusy dry hops, a bit of straw and flowery. A cross between Pale Ale and Saison from hints of cheese, kinda like a Belgian rustic pale ale. The maillard effect is too pronounced and overwhelming. So it lacks a bit of complexity. Feels a bit more alcoholic, like 7%. Balanced bitterness and sugars. Still really fresh and pleasant to drink. Overall high quality craft.