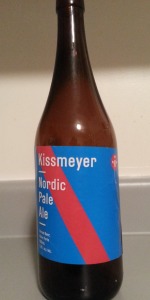 A one-man gypsy brewing company, Kissmeyer Beer creates innovative beers with a distinct personal and unique character, brewed to an exemplary degree of technical quality, inspired by and often brewed in collaboration with world-class brewer friends and colleagues. Nordic Pale Ale is a pioneering style for Kissmeyer, intended to fuse the best in modern brewing techniques with ingredients that reflect Nordic and Canadian traditions.

Pours a nice honey yellow with a thick four finger head that lasts. Lace sticks to the side of the glass. Aromas of biscuits, floral notes, lemon, grapefruit, honey(yet no maple, and the ingredients say organic maple syrup). Tastes strongly of biscuits and heather, with a honey and syrup/bitter aftertaste. The roses kick in after you let the palate mellow. Mouthfeel is smooth, clean and bubbly. I like this beer. I'll pick up a case of it if I can.

Tap: Poured a hazy beige color ale with a large foamy head with good retention and some lacing. Aroma consists of dry hoppy notes with light herbal feel. Taste is also dominated by dry hoppy notes with some herbal notes and lightly sweet malt notes. Body is full with good carbonation. This was an enjoyable beer but I can’t say I detected half of the ingredient after reading the commercial description!

This is one of the better beers I've had in a while. Nice and bright and flavourful, quite enjoyable.

Hazy apricot orange under a short head, a little bit of lace. Fruity grapefruit nose, nice and hoppy, a whiff of pine. Sweet up front to taste, fruity again and resinous pine, tasty grapefruit rind. Nice sparkle from the carbonation without being excessively sharp. It all comes together very well, making the beer a pleasure to drink on several levels.

600ml bottle purchased as a single from the LCBO booth at the Toronto Royal Winter Fair.

Poured into an imperial pint glass, formed a 1/2" off-white head over the clear golden amber brew. Head dwindles but settles with plenty left, with excellent lacing. Aroma is sedate and non-descript.

Taste starts earthy and spicy, multiple fruity notes in the middle, and closes moderately bitter. Mouthfeel is prickly with carbonation but still pretty smooth, and drinkability is good. Interesting brew.

Nordic Pale Ale was designed by Anders Kissmeyer, a Danish brewer, but brewed at Beau's in Canada. Apparently Pale Ale - even its most unique incarnation - is universally understood to be radiant golden, at least relatively clear (allowing for some protein haze, naturally) and topped with a pile of clean white foam.

I'm not sure what to make of the aroma, which isn't surprising given I'm unfamiliar with the first two additional items on the ingredients list (sweet gale and yarrow). The next two (heather and rosehips) I could recognize, if only they were more present. As for cranberries and maple syrup, I use them in my breakfast oatmeal but not for their aromatic properties.

Halfway through the beer it's yet to make a strong impression on me. I haven't been able to form much of an opinion on it. For something brewed with so many ingredients - and such unique ingredients at that - it tastes fairly commonplace. There is a soft floral component, but that's conventional for well-hopped pale ales. Surprisingly, bready malt reigns supreme.

This recipe is meant to reflect northern ingredients; correspondingly, it is relatively heavy for the style, a pale ale designed for cold-climate drinking. We tend to think of this style as refreshing and quaffable, but this example has more body than some of the stouts I've tried (though it's still something you could toss back quicker than a jackrabbit on a date).

Nordic Pale Ale is a perfectly pleasant beer and incredibly reasonably priced - not to mention, it's exciting to see such an interesting collaboration with such a renown brewer. That being said, it is disappointingly commonplace considering it has a dog's breakfast for an ingredients list. For something billed as "an imaginative interpretation" I expected a far more unique beer.

Pours an attractive golden-orange colour; slightly hazy, and topped with nearly two fingers of frothy, white coloured head. It wilts slowly over the next ten minutes or so, caking the side of the glass with lacing and leaving behind a modest cap and collar combo. The aroma is quite enticing, with notes of heather, flowers and herbs accenting the more dominant (and traditional) APA notes of citrusy hops, pine needles and bready pale malts. Quite impressed so far.

A very tasty pale ale, and reasonably interesting, too - which is a fairly rare thing for me to say as far as APAs go. The backbone of bready malts, pink grapefruit and orange pith is pleasantly augmented by the grocery list of additional ingredients. The gale and heather are probably the most noticeable, providing herbal, almost minty notes toward the finish, reminiscent of their Bog Water gruit. It finishes with a touch of ginger and bitter cranberry, leaving a lingering, herbal feel behind on the palate in the aftertaste. Medium-bodied; certainly more substantial in the mouth than most 'regular' pale ales, with moderate carbonation levels appropriate for the style. Not particularly sessionable, but this quasi-bomber is probably a good serving size for this unusual spiced ale.

Final Grade: 4.33, an excellent A grade. Kissmeyer Nordic Pale Ale is not your traditional APA, but I'm ok with that because it makes for a nice change-up. This isn't the sort of thing I'd buy in bulk, but it's still an upper-tier pale ale that I could see myself returning to once in a while. The price isn't bad either, at least as far as Beau's products go. Considering this is probably the most creative (and one of the tastiest) OCB takes on this style I've had in quite a while, that ain't too shabby.

Bottle from the LCBO, dated 5.27.14 and consumed in mid-August. Served in a mini-pint glass.

A - White foam settles to a thick cap and plenty of splotches of lace. Transparent golden body with bubbles racing throughout.

S - Citrusy hops, nebulous flowers, hint of rosehips, and some sharp Nordic botanicals. Not much malt presence under all that.

T - The flavor shows more hop flavor, with citrus zest being the dominant player. Rosehips and flowers show up in the finish. Fairly low sweetness, although a vague toffee note and perhaps a kiss of rye(?) spice show up as the beer warms.

M - Medium body, pleasant carbonation, and a gritty and tannic texture. No obvious alcohol, and a dry finish.

D - Pleasant surprise, and probably the best thing I've tried from Beau's. Would love to have this on the fresher end of the spectrum. Don't really get a lot of the listed ingredients, but what is there works well together.

A- Pours a orange hued copper color.....even yellow hues.....interesting! The head starts off well, about two fingers thick and quickly disappears into a soapy looking layer. Lacing is very good....plenty of foamy patches clinging to the glass! Appears to have a good amount of fine carbonation rising to the top as well!

S- Spicy, herbal notes, tart berries, wood all come into play with this one. The cranberries used are noticed, and the spice reminds me of peppercorn without the zing. Hop presence is muted and there is a certain sweetness about it...perhaps from the maple syrup used.

T- Very dry and flowery would best describe this one. It is Earthy, wild and leafy all at the same time. I've never been out in the wild North but somehow this reminds me of spending time in the woods......berries, leaves, roots and sage like spice come to mind. Medicinal.......

M/O- Solid medium body and the carbonation is finely tuned but does provide a cleansing nature at the same time, this is very different, and in a good way. I expected something else I thin and am pleasantly surprised by the overall character of the ingredients used...some I've never tried or heard of before. I may get this again if given the chance.

600ml bottle - everything is explained here, so I guess I'm just going to twiddle my thumbs right now, as such.

This beer pours a rather hazy, medium golden amber colour, with three fingers of puffy, loosely foamy, and bubbly off-white head, which leaves a few instances of wayward cloud form lace around the glass as it very lazily sinks away.

The carbonation is quite active in its palate-pinging frothiness, the body a so-so middleweight, and mostly smooth, with maybe a small tithe to pay from the hovering astringencies, as such. It finishes trending dry, the mixed herbal character creating quite the lingering racket.

Overall, this is an adequate enough pale ale, but one that suffers from the hubris of a brewer that seems to think that throwing a kitchen sink's worth of adjuncts at it will somehow make it 'special'. Not so much, I gotta say, as there isn't really anything wrong here (the flipside being that there really isn't anything right, either). Meh.

Bitter pine, juicy tangerines, prickly carbonation dancing on the tongue giving way to rose hips. There is a slightly sweet finish coming from the maple syrup but it isn't there in the sense that you can taste the maple.