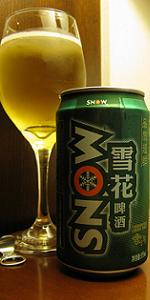 Poured from a can, this beer actually looks pretty decent in a glass. The beer pours a pale gold color with pretty decent head retention and considerable lacing. Alas, things went down hill quickly from there. On the nose, I'm picking up some light grain and a hint of light soap. It's not awful, but it's not particularly attractive either. The flavor profile is just more of the same, and I'm trying to remember the last time I had a beer this light, watery and bland. Mouthfeel is light and watery, with no finish to speak of. Alcohol is undetectable.

This beer is fully deserving of the "awful" score it has so far received on this site. Where's the nearest drain for this swill?

It was CANother wee 330-ml CAN so following the Crack! of the vent, I just let it free-flow Glug into the awaiting glass. I watched in rapt fascination as it foamed up to form just under two fingers of fizzy, foamy, rocky, bone-white head with modest retention. Color was Straw-Yellow (SRM = > 2, < 4) with NE-quality clarity. Nose was clean & moderately sweet. It was definitely adjunct-free, which is a real plus. Mouthfeel was thin-to-medium, just a step or two past watery. The taste was definitely malt-driven & quite sweet, but the lack of hops presence hurt it when reviewing to style. Still, it was nice to be drinking an adjunct-free Lager on a hot, humid Summer's evening. Finish remained sweet, at about the upper limit of my tolerance, but still within spec. Not a bad attempt at a Lager, IMHO. YMMV.

Reviewed by JustCamIt from Virginia

Snow is China's best selling beer. It originated in Shenyang. So, it can be found anywhere in Shenyang. They were owned by ABInbev but they've been sold to a Chinese company HQ'd in Hong Kong.

The local Shenyang food is quite heavy so Snow goes well with it. It's easy to drink a few liters and not become intoxicated. I drank too much Snow during my week in Shenyang. Plus, it's really cheap. A six pack of cans is priced for about 1USD.

1.57/5  rDev -30.8%
look: 2.5 | smell: 1.75 | taste: 1.25 | feel: 2 | overall: 1.5
Drank this one from the bottle twice at local restaurants in Beijing. 500ml green bottle, served in small glasses with multiple pours. Clear light golden yellow body, one finger white head, short retention. Smell is mostly watery with a touch of barley and a bit of a perfume smell to it. Flavour follows, mostly water with barley grain sweetness, a bit of earthy weirdness to it. Thin mouthfeel, did I say this tasted watery before? Overall, a very poor beer that I suppose accomplishes the purpose if you want to drink something that isn't water but tastes like water, but it doesn't even taste very good at all.
Apr 16, 2017
Rated: 2.73 by CPAles from Illinois

Reviewed by OompaMentor from Georgia

2.8/5  rDev +23.3%
look: 3 | smell: 3 | taste: 2.75 | feel: 2.5 | overall: 2.75
This was my 5th beer while travelling in China on business in April 2015. This beer was rated at China's #1 consumed beer so it was a must try. My research before leaving the states indicated this was an Anheuser-Busch InBev product brewed by China Resources. This beer had an 4.7ABV according to my language assistant; this is different from the information indicated below (4.3) by BA and one reviewer indicated a 2.5ABV as shown on a can. I poured from a clear, 330ml bottle into a glass.

A - pale straw yellow with minimal carbonation although it produced a reasonable white head
S - light citrus with the slightest hint of grains
T - light, bland with no hint of grains; again, a rather bland beer
F - light, watery - nothing to speak of

As mentioned, the beers here are light, session style brews. If you have high expectations of finding something akin to the brews in the States, you will be wanting! Good for washing down the food.

Reviewed by pieman25 from Canada (ON)

look: Perfectly fine, nice golden yellow with a head that fades quickly, for Chinese beer it seems to be the norm.

Smell - a bit of grains, light and grassy, not much to say here either.

Feel - like most Chinese lagers, rather light, smooth and fizzy.

Overall - compared to some other beers in China, this stuff is actually a pass, though to be honest most standard Chinese beer would be a pass for anybody into craft, it tends to be very light and sessionable, at least based on a few days experience.

Reviewed by samparkique4 from England