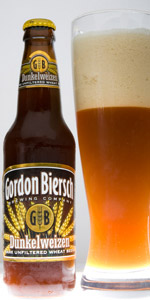 Notes: Dunkelweizen translates from German to mean dark wheat. Gordon Biersch Dunkelweizen highlights the undertones of dark-roasted malted wheat and the unique flavors produced by our special Hefeweizen yeast strain. Our Dunkelweizen adheres to all of the traditions of the Reinheitsgebot (German Purity Law of 1516) and is naturally carbonated.
View: Beers
Reviews: 37 | Ratings: 77 | Log in to view all ratings and sort
Reviews by CrellMoset:

Bottle courtesy of dkachur - thanks! I'm just now getting around to reviewing this one, as I'm desperately looking for an excuse to stop studying for the bar. A dunkelweizen is as good an excuse as any!

Appearance: Pours as you would imagine - looks like, well, a dark, unfiltered wheat beer. It's sort of a hazy dull brown, and not quite as opaque around the periphery, where it shines a muted sepia. The lightly tanned two-fingers of rocky head fade quickly at first and then even out, maintaining a formidable one-finger height for a while, a foamy, soapy, sticky mass. Fast, zippy carbonation is visible at the very edges of the glass - anything deeper is obscured. The lacing itself spotty, speckly, dotty. This really is an attractive beer - if the lacing and head retention were a little nicer, it'd be near perfect.

Taste: About what you were expecting from the nose, though perhaps a little bit thinner and a little more "unripe" in the banana notes (which is probably just me detecting lighter, fruitier esters). Very bready and moderately roasted malts - lending it a very sweet though not syrupy or sticky backbone - accompany the aforementioned slightly underripe banana notes, a few a faint green nutty notes, and a handful of other sharper, more citrus-esque fruit notes. All in all it's a little less vibrant and varied than the nose - seems a little "thinner," too - but it's good.

Mouthfeel: Crisp and full of light, average-sized effervescence in a body of moderate thickness that's still somehow reasonably even. About what you want from this style, though it is perhaps a little thin.

Drinkability: My first Gordon Biersch, and a surprisingly pleasant beer. First off, good for them for taking a stab at a style many don't. Secondly, kudos to them for getting it right. This has all the characteristics of a straightforward, drinkable drunkelweiss, from the bananas and cloves all the way down to the roasted but soft malty foundation. And at 5.4%, you can afford to drink it while studying for the Virginia bar exam.

On tap at RDU. Don’t know if I’ve had this style before. Strong sweet taste. Some banana taste. Body is a beautiful cloudy amber. Love the look.

When most brewers are popping out light and fluffy spring seasonals Gordon Biersch jukes toward the dark side. An unfiltered dark wheat beer to be exact. Poured in traditional Weizen glasses to help swirl the carbonation around, which not only helps create a massive crowning head, but pushes some of the aromatics out. Head retention is quite stellar and the color lands dark brown and very cloudy. Bready wheat malt, dusty clove and slightly green banana in the nose. Incredible smoothness has a lot of depth in the medium body. Layered maltiness shows some breadiness, caramel and a quick twang from the wheat. A little lemony with some herbal phenolics from the yeast. Hints of green banana, apple skin and mango hit around the center. Malty, but on the dry side, with some chalky yeast in the finish.

Overall, this is a great brew. The biggest reason is that it doesn't lean toward clove and banana too much and there are no harsh phenols, which some brewers seem to not be able to tame. Kudos to Gordon Biersch, we dig this beer a lot.

I have read the reviews on this beer and when in Harris Teeter today I grabbed it.Poured into my Brooklyn-Schneider Hopfen-Weisse glass a deeper russet color with a great blooming off white head that stuck like glue to the glass.Milder aromas,a mix of green apple,banana,and clove mainly,a bit of iron as well.Light but flavorful wich really is true to the style,lemony with light phenolic spice.a trace brown sugar and chocolate to compliment the fruity and spiced components.This pretty delicate compared to many American versions of the style wich is a good thing,very well done.

Poured a deep brown with a fair amount of foam and loads of lace. The smell of wheat, roasted malts and yeast filled the nose. The taste was of a thick sweetness with a hint of bitterness to balance this smooth tasting dunkelweizen. One of the best U.S. Dunkelweizen that I've tasted in a long time!

You can easily tasted the malted wheat and yeast in this beer. The roasted malt offsets some of the banana, citrus and clove flavors, producing a sweet, rich and slightly spicy brew that is both refreshing and nuanced. Apparently the beer undergoes five to six weeks of aging which helps strengthen the flavor. Another great GB beer.

Enjoyed on-tap at the Miami brewpub. A hefeweizen with lots more chocolate malt, nothing wrong with that. An above average mouthfeel with bananna consistency and taste. A good dunkel, good looking with lots of lace. Milkshake, though taste is on the sweet side and no complexity.

Cloudy/hazy light brown color with a tan or apricot hue and some biege head and too dificult to see the action.

Banana, hint of caramel, and some grain malt aroma.

Even background notes of banana, bubblegum, and vanilla with lots of toasted grain, wheat, and barley malt flavors.

This is a toasty grain session beer brewed in craft form, excellent.

Taste: Green bananas and cloves up front, with bubblegum and unsweetened apple sauce arriving to add complexity and balance; by mid-palate, a lemony tartness notches up the flavor profile and after, the swallow, all of the flavors come together in a well-balanced fashion

Mouthfeel: Medium to full body and creamy, with prickly carbonation

Drinkability: I have had mixed experiences with Gordon Biersch beers, but this one is a top notch example of the style

On-tap at the brewpub. I wasn't blown away by the other GB beers I tried, but this was a pretty solid option. It seemed to take inspiration from weizenbocks, with occasional dark fruit notes. Otherwise there a big sweet banana (like when a banana has black spots) taste along with a bit of cocoa, rum, and raisins. I'd order this again.

This one is poured from a 12 oz bottle dated 3/11. It's bottle conditioned as should be with this style. Displays a muddy, light brown color with requisite wheat haze and a big fluffy head. The head has great retention and takes on a rocky appearance as several minutes pass.

Really nice, full weissbeer aroma with banana, clove, and a delicate spiciness. The banana and clove carry over in the flavor. This beer also has that subtle tart, tangy character that the best german wheat beers possess. The esters are toned down a bit more than a regular hefe would be, as the darker malts lend a light richness and temper the estery character a bit. This beer has a light body and great frothy carbonation level that accentuates the spiciness and makes it very quenching.

This is one beautiful dunkelweizen! The best I've had outside Germany and a must-have for any afficiando of this style.

On tap at Mr.Dunderbak's in Tampa. In a weizen glass the beer was a hazy brown color with a thin white head that still left a little bit of lacing. The beer had a sweet malt aroma, with a little spice. Nice sweet malt taste, some citrus, and a little clove. Comfortable, easy drinking. Enjoyed it.

A- Bottle poured into a weizen glass. Pours a hazed dark brownish color with an off-white head.

S- The aroma is fantastic. There is a lot of wheat malt with banana and cloves and some yeast.

T- The taste follows the aroma with some sweet bready malt with the banana and clove flavors and yeast.

M- The mouthfeel is between light and medium bodied with a good amount of carbonation.

D- This is a pretty solid Dunkelweizen that is definitely worth a shot.

Dunkelweizen from Gordon Biersch Brewery Restaurant
Beer rating: 87 out of 100 with 77 ratings