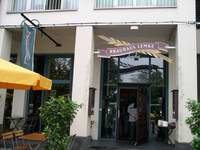 A pleasant brewpub right next to the Charlottenburg Palace. Lovely outdoor seating, it's a great spot for a beer on a nice day.

They advertise always having four different beers on tap; while I visited, they featured Lemke Original, a Pilsener, a Hefe, and a Maibock. The Hefe was the standout of the two I tried (also tried the Maibock), though both were well made.

A large menu of traditional German food accompanies the beer list, and the wait staff is pleasant and willing to describe things. I spoke to them in simple German, and they usually responded in English.

The food was pleasant and good, and I intend to return at some point and try the other beers I didn't taste on my first visit.

Worth a stop if in you're in the area, though I certainly wouldn't go too far out of the way to visit.

In early October, they had 4 beers on tap: Pils, Original (Dunkles), Hefe and Fest.

The Pils was malty. Hefe was lemony with a little banana (kind of between a Berliner Weisse and Hefeweisse due to a little tartness), Fest had similar taste profile to Pils, but a little sweeter.

The food was good quality. They have both Munich and Berliner Schwienhaxe on the menu. If you like it with crispy skin get Knusprige Grillhaxe - a large hunk of bone and pork, crispier than Berliner style Eisbein. We also had smoked Schweinefilets with creamed spinat, kase (cheese) and spiegelei (fried egg). All very good. Nicely seasoned, buttery and crispy bratkartofelln also.

This is a good stop but we are not sure whether they brew their own beer here. There are actually 3 Lemke beer outlets now as Lemke has taken over Mitte. The Hacksecher Markt location seems to have the most turnover/most daring in seasonals as they currently have a Pale Ale. Meanwhile, on recent trips to Mitte and the Charlottenburg locations we have found both had Zwickel as their seasonal.

Being our first brauhaus visited on this trip to Germany, they also served as our introduction to the practice of putting complementary small dishes of freshly roasted malt on the tables. Not sure if this is a northern practice, a new practice, or if we just failed to notice it on our trip a couple summers ago to Franconia - but freshly toasted malt is a great appetizer or snack to go with freshly brewed beers!

All three Lemkes seem fine -- Mitte has a bit less ambience being set in a mall and all. We've had good food at both Charlottenburg and Hackescher locations. We were a little less impressed with Mitte, but could have been what we ordered. Given the proximity of Mitte and Hackescher to each other, I would say just walk over to Hackescher if you are in the area.

But, if you are near Charlottenburg Schloss for any reason, then stop here. Not really a destination pub, but if you are already in the area, its good beer. (We enjoyed the Picassos in the Berggruen Collection which is nearby)

Also nearby is the Frankenstube on OttoSuhr near Wilmersdorfer Strasse (right on the way to the Richard Wagner stop). This is a very friendly Franconian pub that offers 3 taps -- Alt Bayreuther Braun, Pils, and sometimes Schwarz (the last changes with seasonals and we had a Dampf beer here during October). Currently they list the Bayreuther Winterbier as their seasonal. We tried to have some last night but it was not being served or was already gone -- hard to tell because they were having a "beat club" charity dance party and it was hard to determine why there were only two taps being served from. The owners are very friendly here and everyone seems quite at home -- if you like Franconian beer, this is a rare find in Berlin.

Updated May 2011:
Still nothing wrong with the Lemkes -- not a destination brewpub, but if you are nearby, then worth a stop.

This place just opened up this January and we were there about a week after. It is a great looking place. The front is all windows facing the Charlottenburg palace and the inside is all wood with a great view of the brewery, serving tanks and a window to have a look at the open fermenters. The tables are large and wooden, sort of Bavarian-ish. The food that I saw looked good, though I didn't try it. Ii did try the Meter of Beer, though. It was 11 .33ml glasses of one style of bier brought to the table on a large wooden plank. (hint: make sure you order this as your first drink and not your last)

They had 3 permanent beers on tap. The Lemke Original, Hefeweizen and Pils. They also had a Seasonal which was a zwickel at the time of my visit.

This is the 2nd Lemke brewpub in Berlin and Ii havn't visited the first one yet, but Ii plan to.

It seemed a bit pricy. I dont have the prices off the top of my head, though. But the bier and atmosphere are great. Make sure you cheeck it out after a long, parched day at the palace.

Lemke Am Schloss in Berlin, Germany
Place rating: 3.82 out of 5 with 4 ratings