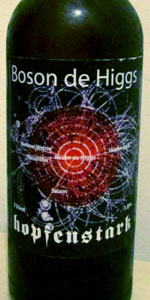 Reviewed by Premo88 from Texas

L: cloudy yellow, SRM 2, pushes up 1-inch head of white foam; no sticking; good activity in glass, keeps a collar and full skin; no lacing; clears up some as it sits but never reaches 100% clear

S: smokey light malt, slight bit of peat, loads of yeast, earthy but with just a hint of something sweet (from the malt?); smoked peach with a little lemon peel

T: yeast, yeast and more yeast ... almost bitter from the yeast, very earthy, lemon peel; slight sweetness from the malt, almost peach; as it warms, the smoke flavor peeks in and mixes with the earthy yeast flavor to give it a small peat/beechwood note; as it warms, the wheat starts giving it a banana flavor

F: light, crisp, easy to handle and very much within berliner weissbier parameters

O: the smoked-malt aroma is fantastic, a highlight for rauchbier fans, but the overload of yeast in the flavor brings down the experience a notch; still, it's a helluva concoction hopfenstark has cooked up, and I wonder with all that yeast flavor if this brew wouldn't come off better with some age ... there's enough sweetness in the flavor to make it seem possible; a beer that tastes much better at warmer temperatures -- mine started off very cold, and it didn't truly open up until after 20 minutes sitting in the glass

Like physics and the name is great with boson de Higgs. Let’s see if this particular beer has any mass. This is described as a Berliner Rauch ( smoke) saison. That’s a mixture!

Aroma is saison yeasty with smoke

Mouthfeel is very light, the flavor although not over powering is there

I go with the "smoked grisette" theory proposed by thebeers. It's so light and instead of the usual fruit in a grisette, it's -- surprise -- smoke! All quite drinkable and tangy, so light it's a big gulp. Tasty and odd, a nice surprise to have so much flavor in such a low-alcohol brew. From the 16 oz can purchased at a San Francisco beer shop. It's contract brewed by Dorchester Brewing Company, Boston.

3.99/5  rDev +6.4%
look: 3.75 | smell: 4 | taste: 4 | feel: 4 | overall: 4
Can to tulip. Why? Cause I don't have a clue what this beer is supposed to be, honestly.
This was poured into a tulip.
The appearance was a glossy semi-bright yellow color with a subtle transparency about it. Small cap of a little white foamy head started and slid off at a decent pace. Some lace slid off and sank with the sips as it concavely stuck to my glass.
The aroma was weird but somehow I liked it. It had a sweet ham-like smokiness up front with some sour to bitter lemon rind. Subtle wheaty tartness kicks on the back end.
The flavor had that smoky sweet ham pretty bold and up front pushing the sour and wheaty tones back a bit. Not much of an after taste, but what was there seemed slightly smoky, a touch of wheat and then some lemon.
The mouthfeel was between light and medium bodied with a pretty good sessionability. Good carbonation and a sturdy ABV. Crisp sweet smokey and touch of sour in the finish.
Overall, well, I get to the end and have no clue what style this is supposed to be. All I can tell you is that it's damn good, so try it for yourself and take my score for "overall" with a grain of salt.

Rated by ThisWangsChung from Maryland

Reviewed by Angerhaus from Rhode Island

Light aroma of smoked ham with some crakery malt behind, as well as a hint of floral hops and light soap. Maybe a touch of mint and grass as well.

Similarly light tasting. Again with some light smoke. A touch of farmhouse or grisette-like Belgian yeast and soapy, floral notes. A hint of hay. Very light lime juice tartness. And some more light smoke in the semi-dry finish.

I'd call this more of a smoked grisette than a BerlinerRauchSaison, but there is a definite light tartness to it. Fun enough hybrid, but not one I'm likely to come back to. Love the can art, though.

3.43/5  rDev -8.5%
look: 3.25 | smell: 3.25 | taste: 3.5 | feel: 3.5 | overall: 3.5
Light golden yellow with decent head. Aroma is a big punch up front of smokiness with a bit of sour at the end. There is alao a bit of tart citrus that blends in quite quietly. Taste is semi-tart and sour with the smoke still remaining the big flavor. A touch of funk joins in along with lemon and hay. Mouth feel is pleasant and finish is very crisp and clean with the smoke lingering until the last minute. A very interesting beer and a mix of many styles it seems !
Oct 16, 2017
Rated: 3.24 by Shortbox81 from Washington

3.38/5  rDev -9.9%
look: 4.25 | smell: 3.75 | taste: 3.25 | feel: 2.25 | overall: 3.5
Pours a clear gold color. One inch head of a white color. Great retention and decent lacing. Smells of strong yeast, sweet malt, hint of floral hops, slight smoke, slight coriander, and slight grass. As it is a combination of three different beer styles, I guess it roughly fits the stand alone style of a Berliner Weissbier. Mouth feel is sharp and crisp, with a high carbonation level. Tastes of strong smoke, slight sweet malt, slight yeast, hint of pale malt, and wheat. Overall, good appearance, and distinctly smoky, wheat-y. and tart. Interesting attempt, but the blend is all over and confusing.
Jul 10, 2017
Rated: 3.74 by FBarber from Illinois

Reviewed by FriedSlug from North Carolina

Reviewed by Dewsby from Kentucky

Smell: The nose on this one is definitely stronger on the "Rauch" portion of the beer than expected. The ham-like smokiness overwhelms the nose, but fruity esters and a distinct breadiness are still present giving the beer an extraordinary farmhouse feel.

Taste: The acidity of this beer is much more nuanced than expected, almost disappointingly so. There is a distinct banana-like fruitiness that works very well with the slight sour twang and smokiness that is weaker than one would expect based on the nose.

Overall: Surprisingly well-balanced considering all the variables at play in this brew; a lovely summer drinker, particularly on a hot evening bbq or anywhere near a farmhouse.

Rated by BierRunner from Ohio

Reviewed by MikeyBadnews from Massachusetts

Smells like a Berliner Weisse and tastes like a Rauchbier. I mean they rock these flavors. Raucbier is a tough one to appreciate because the smokiness and meatiness is so profound but only slightly cut into by the lactobacilicus. The ashy smokiness lingers.

Uber Complexity in this beer. Not my style but you have to appreciate how they made it work.

3.74/5  rDev -0.3%
look: 3.5 | smell: 3.75 | taste: 3.75 | feel: 3.75 | overall: 3.75
i was so excited to see a beer from these guys, its been so long since i had those great saisons, but this is a canadian brewery and my pint can says a product of the united states, which upon further investigation reveals a contract brew setup, which in the old days i would have never pegged these guys for, but whatever brings me the beer i guess... its a smoked berliner beer, with a strong what flavor, some nice body from the malt there, a beachwood sort of smoke to it with some sweetness and some iodine amongst the wood, and then a light hop, a belgian yeast note, and just a little front end bacterial tang. its awfully complex, but its also beautifully simple. the smoke is cool because its distinctive but even the light wheat can push through it, and so can the floral hops and the saison yeast which seems belgian and warm fermented to me here. i burp sweet smoke, which i didnt know was a thing, and i taste white wine grapes and bandaids, peach juice and cigarette ash, and some lemon lime soda, a little burnt. cool beer but it tastes and feels a little rushed and cheap to me, under carbonated too, and a far cry from the rich and mature beers i remember from hopfenstark. that said, i like it pretty well, the price is right, and i am excited to see these guys back out in distribution. worth trying one, but i wouldnt pick this one up again in this format i dont think. appreciably different though, but i bet it was better when they made it themselves...
May 23, 2017
Rated: 3.5 by atlbravsrno1 from New Hampshire

Notes: The owner/brewer just happened to be there on the day that I visited and recommended this to my friend and I. He explained the name (I was previously unaware of what the Higgs Boson particle was, although I immediately recalled seeing a television interview with Michio Kaku where he explained it, but which made no real sense to me). If I'm not mistaken, regarding the beer the name refers to a yeast or beer that they used as the starting point for this one. Anyway... It's a fairly clear gold in color beneath a short head of frothy white. Better than average head retention and lacing. The aroma is mineralish, gently spicy, grainy-wheaty, and smoky. The smoke is not bold like you might find in an Aecht Schlenkerla, but it's clear. The flavor is similar: thinly wheaty in maltiness, spicy, tart, fruity, mineralish, and more subtly smoky. It was explained that this is a rauchbier-berliner weisse-saison which kind of makes sense. There's a definite smokiness to it, as well as some tartness, but it's also got some malt and body to it and spice, so it all comes together.

Reviewed by Moose90 from Washington

A — Pours a murky odd shade of brownish amber into the glass, there is an off white colored head that resides in patches around the edges, leaving bits of residue behind it.

T — A deep wave of pungent smokiness overpowers any malt base or lacto tartness.

O — Pretty poor overall, a smoky Berliner is not a style I wish to revisit, there is no balance here and it is overpowered by smoke.

Reviewed by michaellabreche from Canada (QC)

Reviewed by fourstringer from Maryland

A: Hazy, golden yellow body with 1/2 finger of stark white head. Average retention for a Berliner Weiss. No lacing of note.

T: Smoked pale malts open with minimal tartness. A hint of farmhouse and a very faint salinity. The hops are mostly evident in the aftertaste with a slightly floral presence and light bitterness. No alcohol presence. Finish is semi-dry.

M: Light to moderate carbonation with a light body. Feels rather light, even for a Berliner Weiss.

O: I had very high hopes for this beer as the combo of Berliner Weiss, Rauchbier and saison was very intriguing. Unfortunately, I got very little Berliner Weiss aside from the body and low ABV. I found myself searching for even a hint of sour on every sip. The other two styles just came off as watered down.