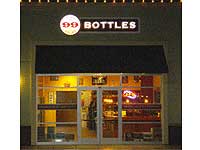 View: Place Reviews
Reviews: 44 | Ratings: 64 | Log in to view all ratings and sort
Reviews by Beerandraiderfan:

Was really blown away by this place. As I recall, about 95% of their stuff are in coolers. I think anything can be purchased in singles, although I still would like to see more 6 pack selection, this seems to be a downward trend in availability.

Totally inconspicuous location. Wide open floor plan inside. They had all kinds of gems of selection. I mean, I got my first Southern Tier stuff here (3000 miles away), and it was still delicious. Anyways, after spending almost an hour going through the store and spending way more than $100, the dude at the register allowed me to pick out some pint glasses for free. Wish I was in the area more often. This is a world class bottle shop.

I mean, 99 bottles, Hollingshead, Discount Liquors . . . its in that elite grouping of retailers.

EDIT: On my second trip, they didn't give me anything free, and they get even stingier with the cardboard you wanna take. Still, I'm gonna keep shopping there, but its not quite as elite as my first impression, at least service wise.

Sorry. 99 bottles is now out of business/Closed permanently.
So sad. This was a great place.

I have never walked out of the store without a huge variety of cold beer. The staff is friendly and knowledgable. The location is not ideal, and therefore, the parking situation can be a challenge.

Stopped by as I was working my way back to Spokane after a visit with family in Olympia. I'd tried to go here last time I was in the area, and at thta time they didn't open until 4PM, I believe. Nowadays they open at 11AM, which is much nicer for those coming into or leaving town earlier than that.

Located literally at the west end of Highway 18, 99 Bottles is located in the near-corner of a strip mall filled with various uninspiring corporate entities - truly a diamond in the rough!

Lots of coolers of beer on the left side of the store. Shelves with un-chilled beer are at the rear. The lighting is sufficiently muted to cancel any worries about beer being light-struck. By the cashier station is a growler station. I was going to be driving about 300 miles, plus there was nothing I just had to have on-tap that day, so I declined getting a growler fill, but I could very well make use of it next time I come over if there's something my brother, his wife and I all could live with.

I strictly limited myself to what I could not get at home...and walked out with 8 bottles of beer, mostly IPAs (I'm a bit of a hop head and had spent 3 1/2 days with people who are not) that were locally brewed , plus an imported porter from Israel because I'd never seen a beer from there and was curious. Prices were very reasonable - I'd picked up a bottle of Fat at a grocery store in Olympia that morning and saw it at 99 Bottles for nearly a dollar cheaper.

I will hit this place whenever I can in the future.

Recently moved to the Tacoma area and this is obviously THE place for outstanding craft beer. The rating is well deserved.

I haven't lived in the area that long but I'm guessing if it's bottled 99 bottles gets it.

The selection is outstanding, the layout is fantastic and the service friendly and knowledgeable. It actually reminds me a lot of West Lake View Liquors in Chicago with the wood shelving, hand written tags, and beers that you don't expect to see peering out at you around every corner.

What's extra cool is that they do growler fills and seemingly always have something from Boneyard on tap (though truth be told, I'm not really a fan). Still, this is easily my go to bottle shop.

I don't live in Washington, but my son goes to college in Seattle. When picking him up from school, we had dinner with family in Federal and happened to see 99 Bottles. Nirvana! I had only ten minutes before closing, but they provided great recommendations on local beers. Wonderful selection. Clean. Well laid out. Just wish they had one in Bay Area!

I've been down to 99 Bottles two or three times and they are a great little bottle shop. Huge selection, clean space, helpful staff, reasonable prices. I think some beers hang around there longer than other spots. Overall a must-visit if you're anywhere near Federal Way.