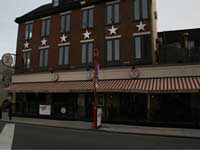 Reviewed by corby112 from Pennsylvania

3.68/5  rDev -10%
vibe: 4 | quality: 4 | service: 4 | selection: 2.5 | food: 4.5
I've only been here a handful of times but it's a nice casual restaurant with an eclectic menu and small craft beer selection. It's more of an upscale gastro-pub but more of a restaurant than a bar. Nice decor with excellent food and pretty good service. They had a small beer list but everything on it is pretty good. They have locals like Victory, PBC, Yards, etc. as well as the standard Belgians like Bernardus and Chimay.

Overall, this is a great place for a meal, especially of you're on South Street, and while thy have decent beer, you should be gong mostly for the food.

The menu is interesting but not overly exotic, and always well executed. The atmosphere is friendly, quirky, and comfortable, and there is a small outdoor patio area that is fun on nice days. The service is friendly and efficient. The beer list is small, but always has something unusual on it - lately the new Victory bitters. They do an excellent job showcasing local beers, such as Victory, Sly Fox and Philadelphia Brewing Company.

While Bridget Foys does not have an extensive draught beer list, it does have one that is exclusively of local craft beer, such as Sly Fox, Victory and Philadelphia's own Yards. (As a traveling beerophile, I always make it a point to support local brewers.)

Today's Bridget Foy's is not the burger joint it once was. It's still known for the outside seating, but the menu has changed. They've gone upscale. When the server asks you if you'd like your water "tap, sparkling, or still", you know you've hit the big time. Tap for me, thanks.

The food is good, and not overly priced. As a vegetarian, however, my choices are limited. I do eat seafood though, and I can recommend the Crab & Shrimp Wanton appetizer ($9) and the Crab Cakes ($19) if they still have them. The Mushroom Risotto is quite nice as well. And I've also enjoyed mussels and a cheese plate ($10.50 I think). Ooops... the Chicken Enchilada was good too... I ate around the chicken!!

I remember dining here back in the early 80's and it was nice, but not "nice" - it's a bit more polished now. And to be honest, even this good end of South Street was a little rougher back then.

The bar at Bridget Foy's, however, remains comfortably the same. It can be tight, but hey, it's a throwback... just the way it originally was. And although it gets elbow-busy most of the time, the bar service always remains pretty good.

Turbo Ale from Yards is the house beer... it's just Philly Pale Ale with a new name. It used to be Stoudt's.... hmmm? The rest of the list is local as well, and I remember Troeg's Dreamweaver Wheat and Victory Golden Monkey from my last visit. There are around 12 beers on tap, and they're all good, but I didn't find anything that stood out - or that I couldn't find within a fairly short distance. So, the beer selection is pretty average, but at least they're selling good beers.

As a beer destination, it doesn't even come close. As a place to hit for a good beer when you're on South Street, it's OK. But there's also Tattoed Mom's, The Black Door, Zot, The Dark Horse, The Artful Dodger, Kildare's, The Latest Dish and a few others that offer roughly the same selection or better. Go for the food and enjoy the ambiance, and let the fact that you have a great local craft brew suffice. Then look around for some great brews.