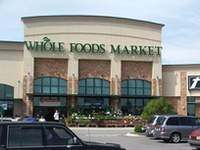 View: Place Reviews
Reviews: 9 | Ratings: 15 | Log in to view all ratings and sort

This is essentially the same as any Whole Foods Market - and I do like ’em. I found the service people to be helpful and alert, yet not all over me or over-eager. I received assistance and service quickly even though the place was fairly busy. Beer selection includes at least three brands I have never seen before - and I have thoroughly explored beer stores in Atlanta, Raleigh, Pittsburgh, Detroit, Portland OR, Asheville and Birmingham. I didn’t try any food, but from past experience with Whole Foods I am sure that it is very good. Since this is near the Total Wine & More on Woodruff, you can hit two good beer stores in a short time.

when i first started drinking craft beer this is where i came. it's a whole foods so the atmosphere is basically the same as all whole foods, where it kind of seems slightly dark in the grocery store that smells nice. everything in the store is quality. the service is good, ive been here a lot of times when noone even talked to me, but other times people have be extremely helpful. the selection is good with a lot of really good beers, and occasionally a rare beer ever now and then. this is a grocery store where you can buy food at the store to eat, and that's pretty good stuff. decent prices.

I was pleasantly surprised the first time that I wandered into their beer section. With it being a grocery store, I did not expect much. However, as others have said, they have a pretty decent selection with a few hard-to-finds every once in awhile. I try to make my way back at least once a month to check them out. Service is usually pretty good as well if you are shopping around and find the right person to ask questions to. However, if they don't know, they will try to find someone who does. They always keep things in stock so there is no disappointment when you see the 'Out of Stock' tag on the shelf.

One of the four beer retail destinations in Greenville, the others being State Spirits, Total Wine & Green's. Good selection here, both cold & room temp. They get some hard-to-find items every once in awhile. Scored some COAST Blackbeerd here a little while back. Singles are offered, but they are cold (not the best if you need to travel) and they only offer a very limited selection of what they actually sell in 6 packs. That said, for a grocery store, they do a very good job on the beer side of things.

Located in a strip shopping center 1 block south of I-85.

This is one of the nicer WF's in the south. Very well laid out store. Quite a variety to purchase and you don't feel crowded, unlike the WF's in NC.

Two large open coolers and 1 moderate shelf space make up the beer section. Some beer stored on the floor near the produce, bread, and cheese - so keep your eyes open. What they lack in space they make up for in quality. Very few bums to be found here. Southern Tier, all the Highlands (including Cattail Wheat just in), Lagunitas, Thomas Creek make up the highlights. Decent selection of Germans and Belgians as well.

Combine this with the TW across the street for a good shopping trip.

This is among the best Whole Foods stores that I've been to, tied with the one in Columbus OH (but better than both Manhattan locations, surprisingly). The selection is broad, many USA craft beers with quite a few from "locals" such as Duck Rabbit and Terrapin. Lots of Belgian and German beers as well. The guy working in the beer section was very helpful, he pulled out some Terrapin Side Project from the back when I asked if anything was received lately. Prices are very reasonable, and you can get an amazing variety of beer not available in the area several years ago (before the ABV cap was raised). Recommended.

Whole foods is by far the best place in Greenville for good beer. The beer staff (they also work the cheese department, which works out very well) is very knowledgeable, and is willing to hunt down anything that they can get in SC. The main man is also a hophead like me, which is another plus. Their prices are very competitive with Greens and Total Wine and More (the other two decent beer stores in town), but their selection is better, and they don't waste shelf space on crappy American adjunct lager beer.

Great grocery store; very impressed with the selection of food, but this is beeradvocate, so:

I specifically came here from Atlanta in light of the alcohol limit lifting, in search of some key beers which South Carolina has that we in Georgia do not. I was not disappointed.
I had done my research and discovered that this was the only beer store in the Greenville area to carry New Holland, and i got several of theirs; Dragon's Milk hasn't quite hit SC but it's on the way.

They also had a very impressive selection from Allagash, which is not in Georgia. As to what I can get at home, they carried several items from Thomas Creek and Victory, and what appeared to be the whole line of both Ommegang and Unibroue, among many others. They now (that they've hit South Carolina) have a whole section just for high gravity beers.

They also have a "build your own 6-pack" case elsewhere, which is always fun.
I can't really comment on the service, since nobody was around in that section, but the beer case was well organized and easy to work with.

Overall, I was very impressed. A highly recommended stop for beer in Greenville.

Well the latest WholeFoods to open in the upstae. Now these stores always have a fine slection of brews, even in SC where they have to function under the 6% cap. A full cooler aisle devoted to beer, with pretty much every local they could carry, including most of the duck rabbits, palmetto's, thomas creek, a few terrapins, etc. Nice selcetion of singles and make your own six packs as well. Pretty diffiecult to get any good beer help as they are primary wine people, but they will always offer what they know. Prices are a bit high, but the seclection again is decent for a food store. Not really a must stop if you are from out of town, but locals can pick up a few things.