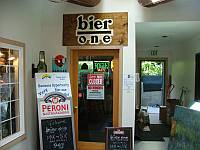 Reviewed by ale_man from Oregon

4.28/5  rDev +7.8%
vibe: 4 | quality: 4 | service: 5 | selection: 4
I stopped in while visting friends in Newport and found it to be very enjoyable spot to have a pint or two. The bar tender was very friendly and he was willing to make suggestions as well as offered samples of beers that I might enjoy. I would highly recommend stopping in when your in Newport.
Sep 21, 2013

One of the beertenders was friendly. The other was cranky as hell. Got all cocky when I asked how long they'd been open. She told me snarkily "2 and a half years" like I give a flying fuck not living in the town...ugh. All the other employees were nice and friendly.

Either way the spot is decent inside. There are 2 pool tables, 1 foosball table, lots of room to sit around. The food was pretty solid. The taps were decent. I think there were around 12 if I remember (which is hard to say since I had about 4 glasses of wine before I got there...).

The cover band was playing 3 Doors Down and a bunch of other cheesed out awful rock so that was not super entertaining. The drums were out of key but I doubt anyone else noticed.

Additional stuff...there was a small but decent bottle selection. They are also a home brew supply spot so yeast, hops, etc. is available as well.

Bier One is a fairly small establishment, with not a whole lot of frills. There were several tables and chairs, a foosball game, and then a small bar area in the back holding 7 or 8 seats. There were also several shelves of brewing ingredients, and then a couple of cold boxes in the back holding a decent selection of craft beer and imports (didn't see any macro crap, but in all honesty, I wasn't really looking for it). I think there was a flat screen TV over the back of the bar, but it wasn't on today. All things considered, this seemed like a very low key, relaxing place to kick back with a beer or three.

In addition to the bottle selection (which can be taken to go or enjoyed on the premises), there were 11 beers on tap today, along with one cider. The quality level was pretty impressive, and included things like Bear Republic's hop rod rye and Apex, Double Jack, Weihenstephaner hefeweisse, Block 15 pale ale, SOB pils, etc. Service was quite good, with the bartender very knowledgeable and engaging. He indicated he's a homebrewer (as well as a confirmed beer geek), which I'm sure only helps in terms of answering most beer related questions put to him. Food was limited, but what they had was pretty good. This day it consisted of several pannini's, a grilled cheese sandwich, soup and various snacks. Pricing here is pretty gentle I thought. During happy hour pints are $3, but even during regular hours (when I was here), my sandwich and two pints came to just $16.50 ($7.50 for the sandwich and $9 for the two pints).

The bartender mentioned that they generally don't carry any Rogue stuff on tap (there was a special keg of mogul madness on tap today), as one can find their beers pretty much every place else in town. So I was all the more impressed when I saw John Maier at the end of the bar with his wife, who had apparently stopped in for a beer while out for a bike ride (gorgeous day on the coast today). Nothing wrong with Rogue beers (though they aren't my favorite), but it's nice to have a place like this as an alternative in Newport. I'll certainly be back....

Reviewed by mudbug from Oregon

4.14/5  rDev +4.3%
vibe: 4 | quality: 4 | service: 4.5 | selection: 4
The best beer selection in Newport, Staff is friendly and well informed. a nice draught rotation with growler fills available.
Not a Rogue beer in sight here, for that go over the bridge one mile.
Parking is available in the back so you can avoid the scary hwy 101 out front, located in the "Deco" part of town, it's easy to miss, so look carefully.
Brewing supplies available and a small wine selection too, also a cigar humidor with a decent selection.
Stand outs are Russian River sours, Cascade sours and Belgians
A nice selection of canned craft also.

Reviewed by Elimination from Oregon

2.73/5  rDev -31.2%
vibe: 3 | quality: 3 | service: 3 | selection: 2
I have been in here a few times, in the periods I have lived in Newport. My love of beer grew from great central oregon, where we have beer practically flowing in our rivers. I would think any place that really tried to take step in oregon, let alone in newport would try as hard as possible to eccel in what they do.

I did not look into the homebrewing expieieince at the moments I visited because I had yet to homebrew. But from the bottle shop/beer bar angle this place really needs to get it together. There isnt a great ambience, a few tables and stools, barely anyone is ever in there. It seems more customers are into the wine aspect of the business.

Thhe bottle selection is very small, like 4-6 coolers I would say of a lot of rogue, a few northwests, a few more west coasts, and a few more national and international. The thing is, I was so used to a larger selection and smaller pricing before that when I went into this place I was stunned. 3.00+ dollars for one single can of dales pale ale? really? Its a great beer but not that great. Even worse most things arent even priced so for the desperate times I went to the store to buy a crazy style I could not get....It was a roll of the dice to see how much it would cost.

Now dont get me wrong in a town like newport, the citizens dont know what they are missing to even have a small amount of access to great beers. Its just that they have to kick it up a notch on the bottle side of things.

Taps of what they have are semi impressive. The occasional rare northwest, or europe import but prices compared to what im used toi are high. Although you wont find anything but BMC, rogue, and maybe widmer throughout town, trust me...

Reviewed by theshunk from Oregon

The home brew supply part of the store is hugely improved. There is more much selection and much better prices for hops and grains and other essentials. There is also a lot more equipment than there used to be and more knowledgeable staff.

Overall the best part is that you can enjoy a beer while shopping for your supplies. How cool is that? Most everything on tap is exceptional and sometimes unusual. And if you don't want what's on tap, you can choose a bottle from the coolers to drink instead.

Reviewed by czechsaaz from Washington

4/5  rDev +0.8%
No longer located on the Bayfront, it's actually on highway 101 (the coast highway) as you drive through the downtown area. What got my attention was the sign for homebrew supplies but they also sell beer wine and mead.

Actually, if you desperately needed homebrew supplies, you're out of luck, just a really small section of equipment and LME. But the beer fridges are good. Some Belgians and other imports and a few fridges worth of craft beer. I was able to find a handful of Oregon beers that I can't get in the Seattle area so that's a bonus. They also had four taps that you can get a pint or fill a growler. Three were solid Oregon craft brews when I was there. Not out-there rarities but good stuff and the 4th was St. Bernardus.

It was late on a Sunday and I was the only soul in there but the woman working there asked if I needed help but I was happy to leave me to browse.

You might find cheaper sixers of good beer in Newport's supermarkets but this is probably your best bet for finding something unusual.

Reviewed by genaro from Massachusetts

3.85/5  rDev -3%
Located on Newport's Historic Bayfront, Bier One offers a welcome variety of beers that are otherwise unavailable on this part of the coast. Here, in a world dominated by supermarkets selling the usual (but certainly not unappreciated) NW micro beer selection, one can find some Belgian offerings (Chimay, St. Bernardus, Orval, Rochefort) as well as Belgian-styled Unibroues and Ommegang. There are a few British selections available, but I found Germany to be a bit unrepresented. U.S. beers included Stone, Great Divide, and Bear Republic, among many others. Most of the beers are chilled.
Meads, at least one from Washington state, are also available.
I found the proprietor to be friendly and helpful.
If you are in the area it is well worth coming here, but it is advised to call first to check on the business hours.