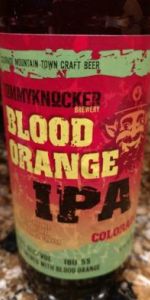 Poured from a 12oz can with a best by date of 11/19/18; into a pub glass.
Appearance- a slightly dark orange with some floating sediment present to go with several bubbles; head is an off white ring around the top and a couple of bubble islands floating along the surface; lacing is minimal.
Smell- strong blood orange and some citrus candy.
Taste - the blood orange is clearly at the forefront, however, not as dominating as I feared it might be. Not bad at all really, but still a little too much orange and less IPA.
Feel - light body, moderate citrus sweetness and the right amount of bitterness to finish!
Overall- I like what TK did with this one and I’d like to see them experiment with a grapefruit, pineapple or perhaps a peach version; I’m not a big fan of blood orange, but feel they delivered a really nice fruit forward IPA.

Notes via stream of consciousness: Well it sure smells like blood orange. The body is a hazy amber in color beneath a short head of off-white foam. The flavor follows with sharp orange amidst grainy malt. It's bright and refreshing and interesting, and the flavor It's nicely balanced between the two, and a median bitterness balances it. This might be the best blood orange IPA I've ever had, and although I know it's just from "natural blood orange flavor" I don't care as it's quite nicely balanced and refreshing. It's easy to drink despite it's IPA status, and 55 IBUs and 6% abv status. I'd gladly have this again, and I hope to re-review in the future as it as I'm just giving it a quick once over right now, but I'd still call it a highly drinkable fruit-infused IPA regardless. Nicely done. Well balanced and rounded. Certainly well worth trying.

In winnowing down the Bottle Backlog here at Chez Woody, I have been provided the (inadvertent) opportunity to conduct brewery horizontals and while I drank some Tommyknocker beers earlier this year, others from them are coming available, causing me to indulge in what I refer to as "chipping" - onsie/twosies here & there just to keep current. It really is no wonder that I have difficulty keeping up.

From the bottle: "Colorado Mountain Town Craft Beer"; "Ale Brewed with Blood Orange"; "55 IBUs"; "Tommyknocker Legend [-] Tommyknockers slipped into the mining camps of Idaho Springs in the 1800's with the discovery of gold in our mountains and streams. These mischievous elves, though hardly ever seen, were often heard singing and working. They guided many fortunate miners from harm's way and to the gold they sought."

I Pop!ped the cap & gave it a moderate-to-heavy pour since it was a very fresh bottle. I will readily admit to having seen some flocculate on the punt in the bottom of the bottle, so I agitated it well beforehand, in case that was the blood orange that needed to be in suspension. It formed two fingers of dense, rocky, tawny head with good retention that left good lacing in its wake as it fell. Color was a cloudy Amber to Deep Amber/Light Copper (SRM = > 9, < 13). Nose was redolent with orange! Mmm. It made me think of those jelly orange slice candies from when I was a kid. Mouthfeel was medium. The taste was very orange with a hint of caramel from the malt. Now, I was thinking of the Brach's center-filled caramels from my youth at my maternal grandparents' house. Next, a conundrum - how to rate this on taste. It was up to billing in terms of the blood orange, but lacked the standard in-your-face hoppiness of an AIPA. As a self-avowed, self-described hophead, I really did not have any problem with it. The IBUs were high enough to keep me satiated & the taste was quite different and very pleasant. Finish was semi-dry and very orange-y. I guess that you had better like the taste of oranges going into this one! YMMV.

Poured from a brown 12 oz. bottle. Has a cloudy, beige/orange color with a 1/2 inch head. Smell is of oranges, little else. Taste is oranges, grapefruit, mild bitterness, no real malts to speak of. Feels medium/light bodied in the mouth and overall is decent, but nothing special.

Best by 12/12/16. 12oz bottle poured into a tulip. Pours a hazy glowing orange with a fluffy off-white head that slowly falls leaving great retention and very sticky lacing. The aromas are nice. Tons of orange and sweet cream. Malts are present, but the citrus shines. The flavors are clean and not too bitter. Lots of blood orange along with some hints of pine. Fresh grass is there. The hops and malts are balanced. Alcohol goes completely unnoticed. Mouthfeel is light and a little thin with moderate carbonation, but still has a nice body to it. Very smooth and very easy to drink.

This is a nice "fruit IPA". Maybe it's not my favorite "fruit IPA", but it's definitely not my least favorite. Nice use of blood oranges. Not bad at all.

On-draught at a sports bar:

Heavy on bready caramel (I assume caramalt), with a zesty citrus edge. Finishes grapefruity, with a lingering pithy bitterness. If I tried it blind, I'd swear up and down it was fruited with grapefruit instead of blood orange.

new one from these guys. citrus in ipa is all the rage right now, why not get in on it? seems blood orange is the most in vogue of the fruits, farmers all over the world must be stoked. this isnt a bad beer, but for me anyway, it was a lot more fruit beer than ipa. the blood orange is leading the charge from the redder color to the sweeter aroma to the tangy citrus flavor. its way ahead of the hops, and the grain is also a bit much with the fruit sugars, it comes across heave and less refreshing than it sounds like it should be. still, the fruit aroma and flavor is relatively true to the fruit, and while i think a lot of stuff these guys do is kind of a gimmick, i think they have this one an honest kick at the can. i expect them to launch it pretty hard, i have heard both bottles and cans are in the works, and i am sure this will sell well. at the very least, everyone in town will buy it at least once. a few of these would be plenty for me though, its too sweet and the hops are more bitter than flavorful. carbonation is good though, and i like that its not just a fruity wheat this time around. needs to be ice cold to hold its value.