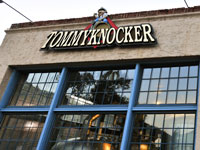 Rated by CWVegas from Nevada

Reviewed by moosecal from Colorado

1.91/5  rDev -51.2%
vibe: 3.25 | quality: 1 | service: 1.75 | selection: 3 | food: 1
My wife and I own 2 business in Estes Park, Colorado. We had frequented Tommyknockers three to five times a year for over a decade, making our dinners there the apex to our days of skiing at Loveland Ski Area. Their delicious burgers, sides, appetizers and generous glasses of craft beer so impressed us that we regularly recommend Tommyknockers as a "must stop" to many of our customers and RMNP visitors that were headed west through Colorado. That is why I felt I needed to comment about our most recent experience at Tommy Knockers Brew Pub in Idaho Springs.

Although our last visit in April of 2016 was as great as ever, we stopped for the first time this year on Tuesday, February 14th, and ordered many of our favorite items, only to be stunned by the drop-off in quality and service.

Our draft beers were served in 12 ounce and 8 ounce glasses, whereas they were always served in pint glasses in the past. When we asked if we could get a pint glass, our server told us he had been working there for 6 years and those were the only glass sizes the drafts were ever served in (which I know to be untrue).

One of our previously favorite appetizers, the Spinach Artichoke Dip, tasted like a can of Campbell's Cheese Soup, and contained 2 pieces of spinach and absolutely no artichokes.

The Elk Bleu Burger, which has always been cooked as ordered and deliciously juicy in the past, came out over-cooked, dry and flavorless. The onion rings, which used to be some of the most delicious, flaky onion rings I had ever had, tasted like the rubbery frozen oven-bags of onion rings you get at Safeway. And yet another burger at the table that was ordered seared on the outside and rare on the inside (which their cooks have always done to perfection in the past) came out as a hunk of slightly warmed meet that appeared to have simply been microwaved for a few seconds. And a side of sautéed onions and mushrooms showed up as about a tablespoon of cold, mushy mushrooms and onions - not even enough to cover the top of the burger.

Even more disconcerting was the response I received from their staff. After politely making him aware of our unhappiness with the meal, the manager apologized, then assured us he would "Ask the chef to kick up the flavor a notch for next time" (whatever that means), and offered us a couple free beer coupons for future visits. How exactly was asking the chef to kick the flavor up a notch going to alleviate our undesirable situation? How does not even offering a discount for the poor dishes make us want to come back in the future? I had only eaten a very small portion of my meal and would have been happy to have them take it back and remove it from our ticket, but that wasn't even offered as an option. I understand that there may have been staffing changes in the kitchen or other issues that contributed to the overall poor meal, but the general attitude of the manager to just tell us "sorry, try again next time" was a very unprofessional way to handle unsatisfied customers. If I dealt with my customers in that fashion, I would be out of business.

Additionally, I sent an email detailing our experience to both one of the owners and the general manager, and never received any kind of reply.

Love these old Mining towns, rich in history.
Had a nice selection of draft on tap. Pilsner standing out ad highlight. Food was quality, service o.k vibe decent. But after 900 + mile days on the road from NH. It was a real delight.

Reviewed by DesMoinesMike from Iowa

Stopped in on the way to RMNP to fill up a growler because they are hard to come by in Iowa. After several tasters I went with the Imperial Nut Brown. I was happy they filled a 32 oz growler from another brewery. The atmosphere is a mountain brew pub that has their act together and cares about their customers. While I was ordering the waitress brought my wife some crayons/paper to keep our 3 year old occupied. She even brought some stickers for him that he loved. Road trip win for Tommyknocker! They're a relatively short drive from Denver so check them out.

Reviewed by gmoneyproductions from Colorado

4.38/5  rDev +12%
vibe: 4.5 | quality: 4 | service: 4.75 | selection: 4.25 | food: 4.75
was here on saturday with my wife for a late lunch/early dinner
it was peak leaf peeper season and a beautiful day
we live about 40 minutes from idaho springs and come here a few times a year
the town is super touristy but at the same time has some authentic mountain elements and an overall decent vibe....the place was packed when we got there but we were seated in 25 minutes in the bar area which we requested. the vibe is classic brewpub and if you sit in the bar area you are basically right in the brewery itself
i wouldnt sit in the dining room
we had an ipa and a half and the imperial nut brown ale. the ipa was decent although not great, the imperial nut brown was excellent strong brown and smoky!
we had duck wings which were good but greasy, and burgers that were fantastic as well as onion rings
service was absolutely spot on and the crowd was entertaining as well
overall vibe at least in the bar areas was great
quality of beers was solid
service was excellent
they had i think 6 or 7 beers on tap and food selection and quality was great
an overall positive and enjoyable afternoon!

Reviewed by sudski77 from Colorado

3.91/5  rDev 0%
vibe: 4 | quality: 3.75 | service: 4 | selection: 3.75 | food: 4.5
I've been to this brewery about 4-5 times. The brewery really plays well to the location and love all the natural wood and openness to the brewing equipment, however the seating area is rather small in the bar area. I always order the bison burger med-well - solid choice. The seasonal pumpkin beer is tasty, however some of their beer tastes too flavored. I've never had bad service but nothing outstanding - always sit in the bar area.
May 10, 2015
Rated: 4.08 by Blazer22 from Colorado

4/5  rDev +2.3%
I love visiting this place in Idaho Springs, and the restaurant is as good as the beer. Hard to go wrong with a buffalo burrito and a beer, that's for sure. I liked the old style of label and logo more than the new version, but that's how it goes sometimes. As long as they keep the beer good, right? They could stand to try a few new ideas, but the tried and true are generally successful.
Sep 25, 2014

Reviewed by Basoos1 from Oklahoma

4.5/5  rDev +15.1%
A must everytime we drive out (or back from) the mountains. Every visit has new seasonals/rotators/etc as well as their long time favorites.