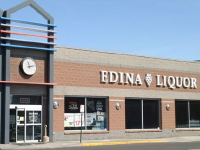 View: Place Reviews
Reviews: 6 | Ratings: 12 | Log in to view all ratings and sort

Edina Liquor is a has an modest selection of craft beer. They carry a couple of brands each from most of the larger Midwestern breweries, but do not carry most breweries whole portfolios. They don't carry anything rare or unique, so if that is what you want you need to go elsewhere. Of all the liquor stores I've been to that are listed here on BeerAdvocate, this one probably has the weakest selection. They do, however, have very good prices, and keep all their beer in the cooler. So Edina Liquor is an option if you need something basic, cold, and are in the area. Service consists mostly of someone at the register to check you out.

This is a decent liquor store that is far more focused on wine and booze and macro brews than it is on individual bottles or small craft selections. The good thing about EL is that it doesnt get a lot of foot traffic in search of some of the more rare releases. I feel like If i miss a release or am not on the spot at some of the more beer focused liquor stores, EL will usually still have some left. There are three stores that cary beer but I have to say that the York Ave location probably has the largest selection.

As an out of towner, I went in search of Surly to bring back home. I was happy to pick up several cases of Furious and Bender without an advance order. (Their website allows for advance order with pick-up at the store.) They also had the CynicAle in cans and the Smoke in 22oz bombers. The beer manager said they are the 3rd largest retailer of Surly in Minnesota. As a bonus, I also found some Founders KBS and Backwoods Bastard. You can also find several west coast brewers like Deschutes. Well worth seeking out for the Surly alone.

this is a wine and booze store first..however it still is a very good brew store ...they have a whole wall of cooler brews all the macro stuff and micro brews and huge displays of brews on the floor..if you look closely you can find some gems..i found bells rye stout.. hoptober..founders harvest ale plus all of founders brews they have a nice import selection with a nice selection of belgiums and a couple doors of bombers i got SN wet hop..this place has really good prices also..they have enough variety to keep hop heads happy and the prices are a plus i recommend this place for your wallet and variety

I didn't take any time to look at the other booze selection, but it was a fairly large store and they probably have whatever else you want in conjunction with your brew.

But we care about the beer, and they had a pretty good selection of that. A full wall worth of cooler space. Obviously a good chunk of that was devoted to the canned stuff, but there was enough of the good stuff to get you interested. Unibroue was the most interesting find they had; 4 different varieties. A good number of single bottle belgians and high end beers. Good selection of bells, summit, boulivard, etc. Not the mecca of beer, but if you're in the area trying to find something to drink, this store will give you something you're looking for.

A city owned liquor store that is nearby my house. Not a whole lot of good beer store options in the suburbs, but this a reasonable one. Just across York ave. from the Southdale mall. Edina Liquor has a pretty good selection of beers. They have an entire wall of coolers full of six packs, 12 packs, cases, and even a couple cooler doors filled w/ singles. Of course over 1/3rd of the cooler space is occupied by watered down macros, the rest of the coolers contain some goodies. Lots of regional beers like summitt, schell, rush river, Surly, Capitol brewery (sometimes), Sprecher, etc. Usuallly has a lot of Sam Adams varieties, including variety packs. Goose Island, Sierra Nevada, and Flying Dog are some others that come to mind. The great thing about this place is that they do sometimes have beer samples. The unfortunate thing is that it is beer I don't really need to sample (i.e. Sam adams, St. Pauli Girl, Leines). As far as Belgians, they have several varieties of Ommegang beer. They also have Chimay, Duvel and about 2 or 3 others. They do have a some coolers w/ English beers (Old Peculiar, Old Speckled Hen, Boddies, Fullers, Mackesons) as well as a cooler w/ Asian beer, German/Czech Beer, and Irish Stouts.

Overall, not the best liquor store in the world, but for the Suburbs it does a reasonable job.