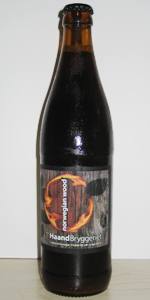 Appearance: murky amber-brown hue with a finger of frothy ivory foam atop. Muddy, but not unattractive.

Smell: mildly smoky with a bready malt aroma; it's nice, if not particularly complex.

Taste: the smoke is a bit more pronounced in the flavor, backed by a mild malt that's bready but not too sweet. There's also a nice balancing bitterness at the end of this one — I like it.

Mouthfeel: medium body with a huge carbonation and a big creaminess that I really dig.

Overall: this is a good smoked beer. The underlying base reminds me of an altbier, and the smoke adds a lot of character without being overwhelming. I don't know whether, or how much, this bottle's age affected the flavor, but right now it is pretty tasty.

L - tawny and murky light brown. Not what I was expecting. Head is the whitest I've ever seen in a beer.

F - borderline flat. Not sure if intentional or not.

O - not my favorite smoked beer.

Poured from fridge temp at a bottle share. Pours light brown and transparent. Nose is spice and smoke. Taste is sweet, grapes, mint, smoke, and slight bitterness. Almost saison like. Mouthfeel is medium and dry.

I usually dont like smokey beer or tea. To me the "smokey" taste ends up tasting burnt and ashy. This beer pulls off the smokey flavor perfectly. Its very well done and it has complex flavors. Its thick and would pair well with cheeses and meat. Fantastic beer. I didnt expect it to be that good. Compliments to the brewer. Keep em coming!

with this brew, i double down on my position that these guys are among the best in the world, the very best, and these is nothing else like this out there at all. nice cloudy pale brown to amber color, and a two inch off white head that continues to rise over the rim of the glass, slowly, methodically, and with no intent on resting. aroma here starts with some light campfire smoke and dry mature wood ready to be thrown on to said fire, with a cocoa note, a wild yeast and dry bretty twang, dried fruits like raisins and figs, and a little fresh lemon zest as well, lots happening here. the flavor is well rounded too, with the smoke leading the way but not defining it by any means, wood and citrus swirling around mature but mild bretty weirdness, wild, not so cultured as what we are used to from american brewers, and not without a malt presence beyond the smoked aspect, with chocolate and maybe some wheat in here too. a slight botanical note, piney maybe, sage or tea too, nice with the curious wild complexion. bone dry and insanely effervescent and without any acidity despite the yeast driven nature of the whole thing. bitter smoke and woodsy vibes to finish, just amazing beer thats drinkable for days and madly interesting. these guys dont get one fraction of the love they deserve from the beer geeks. come on guys, this is some special sauce here!!!

Served in a 500ml bottle at Cardinal in Stavanger, Norway. Batch 997 and bottle notes a best by date of 22 June 2018. Traditional Norwegian Smoked Ale with Juniper Berries.

A: pours a translucent ruby color with a thin off-white head that leaves spotty lacing. Notable sediment suspended evenly throughout the glass

S: caramel malt notes up front with a define smoky character. Some faint juniper in the background

T: similar to the nose, caramel and bready malt up front, followed by a bit of herbal bitterness (not particularly hoppy) with smoke character coming through on the long finish. A unique flavor profile, and I'm glad I got a chance to try this in Norway.

O: an interesting brew overall, and a new style for me. My first beer from Haandbryggeriet if memory serves, and I'd certainly give them another try for unique brews and styles. B-

This one is very strong on the smoke taste, the juniper is there, but greatly overshadowed by the smoke.

From XXXII. In Bavaria glass. Watchig Game of Thrones 6x04. Another smoky beer, not of the worst ones but the smokiness still hides all and dont feel the juniper berries nor anything else much

Appearance - Amber-golden, clear, with a thin head that left legs but no lacing.

Aroma - The smokiness is reminiscent of scotch, though not as peaty as an Islay. The juniper berries come through with a minty, earthy spiciness, which perfectly complements the smoked notes.
However, one fault would be that it gives it a very faint aroma of lightly burnt rubber.

Overall - I live in Germany, and thus Schlenkerla has become the standard for which to judge all smoked ales by, which I realize is probably a little unfair for all others. Although this one is not as great, given the addition of the Juniper berries, it does give it an extra dimension that also makes it a great winter warmer, either indoors by the fireplace or outdoors next to a campfire.

Paired with some chili.

A lot of borrowing from other styles here and making something unique with local spices. But much of the malt comes from the smoked lager master malt houses in Franconia. I like this ale and it has more of a spiced character and more of a chocolate bitterness than Franconia's rauchbiers (lagers).

HaandBryggeriet ("hand-crafted brewery" in Norwegian) has 3 ales on the "1001" list including this. I want to find another one of these and sit it next to Schlenkerla (with other other smoked beer lovers... and see if we can taste those Franconian roasted malts through the ale yeast and spices.

Poured a light caramel color with a 4 F head in a Mikasa tulip. The head resolves within a few minutes.

The aroma is light, smoke, spice, and roasted malt. I could smell the smoke just after opening the bottle.

The taste is wondefully smoky with a roasted malt flavor.

The beer finishes with a good bitterness and roasted malt/smoke.

Excellent beer! It's my first beer from a Norwegian Brewer. Wonderfully spicy, smoky, and with a pungent bitterness.

If you like smoked beer and especially Aecht Schlenkerla you got to love this!

Outstanding nose of campfire oak smoke, a hint of bacon and a touch of yeast.

Medium bodied with a texture that approaches creamy. Superb carbonation with a nice effervescent burst in the middle and a nice prickly finish.

The outstanding flavor profile is intense, but lacks the rich meaty bacon complexity and balance (by being too heavy on the oak smoke) when compared to world class Aecht Schlenkerla. It begins with oak smoke and a bit of juniper bitterness. As these fade in the middle, bacon and caramel take the forefront, but just barely. The finish is a slow fade of smoke and juniper.

Norwegian Wood from HaandBryggeriet
Beer rating: 88 out of 100 with 352 ratings