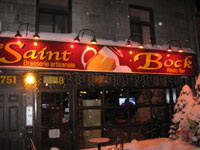 Visited on a recent work trip to Montreal.

Beers ranged from decent to very good. Also ordered a burger that was quite tasty. Service was efficient and reasonably friendly. My overall experience was enjoyable.

The place is hyped in local reviews . In the context of the Québec craft beer scene it was a solid okay. Noisy, crowded, tables too close together, it did not encourage the savouring of the product and meant service was on the slow side. The food was unpretentious. It would have been better if my pulled-pork burger had not been slightly over cooked. The beer list is amazing, but the staff were not as familiar with it as advertised. Choice one was an interesting rye based Saison with some Bret. For the second I asked if they had a Flemish Ould Bruin thinking this would make an interesting follow up. What came was a pleasant but rather ordinary English style brown Ale.

Top 40 pop music. Sports on the two TVs behind the bar. University crowd. Pretty lively. Great food menu for vegetarians but too bad the kitchen was suddenly/unexpectedly closed so didn't get to try anything. Huge selection of beers on a rotating screen; better to go online to their website and browse there. I tried six of their house beers and nothing really impressed me. Decent bartender but certainly not engaging.

Probably my favorite bar from the long weekend spent in Montreal in mid-December. The vibe is incredible, the bartenders and servers are top notch, and the quality and variety can't be beat. On a popular street, Saint-Denis, so it's a must-visit spot for local craft beer.

A good place to visit. Located right downtown. Good tap list and an even better bottle list (the best in the city by far that I saw). Worth a stop.

Really decent beer bar. The prices are a touch steep, but they have a huge selection on tap, good private import, a pretty nice look/feel, and okay house beers.
The food is good and a lot of it prominently features beer. That said it is basically just variations on pub food and is pretty heavy with big servings. You could easily split some of their main dishes. There is a good selection of house beers encapsulating a wide variety of styles, but I find them to be a bit lackluster. They are decent though. Granted, I haven't tried tons of them.
All-in-all a good place to duck off for a pint. You can get some good imported stuff here, too, but it'll cost you.

Le Saint-Bock is in Montreal's Latin Quarter not far from Le Cheval Blanc, Brasserie Artisanale L'Amère A Boire, and one of the many Les 3 Brasseurs locations. If you're in the mood for live music, mainly blues and rock, there's also Bistro a Jojo; or there's a great scotch selection at Pub L'Ile Noire - both have a decent selection of beer as well.

At first glance it may seem small, but once you pass the outdoor seating area and step inside you'll find that it's actually a pretty deep space. At night it has very much of a nightclub feel, and the younger crowd seems to thrive on that. Dance music plays and red light glows from beneath the bar, and against the walls. It has a red, black, silver against beechwood decor theme going on. It's slick, but not overly so. Given my druthers, however, I'd prefer to visit during the daytime when it's a little more casual and 'common'.

Look for a beer menu and you won't find one, unless you look up on the wall at one of the electronic menu boards they have. The draft list slowly pages through, offering 44 beers on tap including 20 of their own. The brewery, by the way, is tucked all the way in back.

I sampled several of the house beers and found them all to be quite good. The guest beers included a few Belgians, a few Americans (two from Stone, Avery's Beast, and something from Moylan's) which was highly unusual, and their Canadian choices were of the finest and most rare from Dieu Du Ciel, Hopfenstark, Microbrasserie du Lac Saint-Jean, Microbrasserie L'Hermite, Microbrasserie Charlevoix, Le Naufrageur, Trois Mousquetaires, Brasseurs Illimités, and Brasserie Franches-Montagnes to name a few. Impressive!

They offer food as well, which is mostly basic (although in Montreal where many places offer no food at all or just "snacks", this is something special), including soups, salads, sandwiches, nachos and chicken tenders, etc. The prices are slightly pricey given the neighboring competition, but with a few beers in you I doubt you'd consider trekking out to save a dollar or two.

Overall I was quite impressed by the beer selection, and I wish I'd gone here immediately (I stayed just up the block but I chose two other close locations to visit in the Quartier Latin and didn't get back until a week later the night before I left for home).