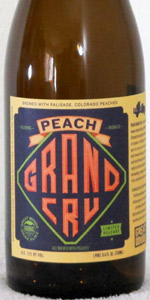 Notes: Peach Grand Cru is Great Divide’s newest limited offering. Brewed with Colorado fruit picked right at the peak of ripeness, this Belgian-style ale marries two of our home state’s well-known offerings: great beer and fresh Palisade peaches. Both sophisticated and balanced, this extraordinary, aromatic ale was born to be savored beyond the orchard.
View: Beers | Place Reviews
Reviews: 21 | Ratings: 163 | Log in to view all ratings and sort
Reviews by metter98:

A: The beer is clear orange yellow in color and has a moderate amount of visible carbonation. It poured with a quarter finger high white head consisting of large bubbles that died down, consistently leaving a thin film of bubbles covering the surface and a collar around the edge of the glass.
S: Moderate aromas of peaches and dark fruits such as plums are present in the nose. The smell starts off a little weak but quickly strengthens as the beer begins to warm up.
T: The taste has flavors of sweet malts and dark fruits but has strong notes of peaches.
M: It feels just about medium-bodied on the palate and has a moderate amount of carbonation.
O: The appearance of this beer is deceiving because it looks like it could be a Belgian Pale Ale but really tastes more like a Belgian Strong Dark Ale with the flavors of candi sugars and dark fruits (accentuated by peaches). If I was blindfolded, I would consider this to be a slightly lighter version of a Belgian Strong Dark Ale with a peachy twist. It tastes a little strong, but most of the alcohol is masked from the taste.

On tap at McNellie's Public house. Dark peach color with a solid head that slowly recedes. Smells of roasted malts and light peachiness with underlying alcohol. The malts were upfront and smooth and the alcohol hit in the back of the throat. The peach taste was a little bit syrupy and didn't feel liked it belonged. Medium-high bodied with high carbonation and the taste and smell of alcohol throughout.
Overall, I finished it and was glad it was a 8.5 oz glass and nothing more. The hops and malts overwhelmed the peach entirely and made me look for the peach. I was very much looking forward to this and ended up disappointed.

750 ml bottle, label says bottled on NOV 18, 2014. Served in a tulip, the beer pours a hazy orange/copper color with about an inch and a half off-white head. Head retention and lacing are both pretty good. Aroma is sweet and fruity, the brew smells like processed candied/syrupy peaches, caramel, bready malt, cloves and a bit of dark fruit (figs). I think the taste pretty much is just like the aroma, but there's also some sweet spiciness, brown sugar and a bit of booze noticeable. But for being 12% ABV, it's not as boozy as I thought it would be. All the peach to me in both the aroma and flavor is the candied/processed kind, and there isn't any "fresh" peaches from what I can tell. Mouthfeel/body is medium, it's slick and smooth with a moderate amount of carbonation. Overall I liked this brew and I'm glad I tried it, but at $19.99 a bottle I wouldn't buy it again at that price.

the newest peach grand cru incarnation from great divide. this pours like apple juice. clear golden in color with a little richness but no head hardly at all. it smells overly sweet, and not particularly like peaches. sweet malt and alcohol dominate in a simple and only semi appealing combination. the taste is better, with the peaches being sort of jellied or candied, too sweet for sure, but I can taste them. there was one sip though, right about in the middle of the glass, that tasted exactly like a bite of a ripe peach. I wish I could get that through the whole thing, but I couldn't. it was there and gone. for that I give it credit, because its hard to make beer taste like peach, but the rest of it was a bit of a sugary booze bomb. well carbonated though despite the lack of head, makes it no so heavy. I could never drink a 750 of this alone, its a task to be shared with friends. a decent effort, but the peaches are just sort of lost in all the alcohol.