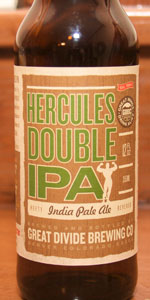 Notes: Hercules Double IPA is not for the faint of heart. It is, however, fit for the gods. Hercules delivers a huge amount of hops from start to finish. Its hefty backbone of nutty, malty sweetness balances its aggressive hop profile.

A: Hazy copper body, with nice head that sticks around a while. Not much for lacing.

S: Malt dominates the nose. Sweet rolls, very similar to their Titan. Alcohol. Hardly any hop aroma, which is troubling.

T: Hop flavors are subdued. I've had this on tap at their brewery and I remember it being better. A double IPA less than 2 months old shouldn't have a hop profile so diminished.

M: Could maybe use a little more carbonation, but otherwise it's fine.

O: Great Divide's IPAs just don't age well at all. I think from now on, I'll only buy bottles I can find that were bottled less than a month ago.

Appearance - This one came out of the bottle an intimidating, deep hazy orange with some brown influences. The liquid is thick, thick, thick. The color showed a lot of depth and was very inviting. The head was modest but well-tanned and left some nice lacing on the inside of my Ruination glass.

Smell - This is a big, heavy, monster nose. There is just tons and tons of caramel and toffee in here. The hops are complex and huge as well. I can pick up some good pine sap along with some big citrus and a few other notes that give a lot of depth to this gigantic bouquet. All in all, this is one of the biggest, most-balanced ADIPA noses that I've ever smelled.

Taste - The taste follows the nose except the malts are noticeably dominant. For all the hops here, they take a back seat to the huge, luscious, gooey caramel and toffee malt presence.

Mouthfeel - This is big and full-bodied. I'm talking Pliny the Younger big. They should serve this at Ruth Chris' with a side of mashed potatoes. Forget the knife and fork; give me the classic 1970's-style electric turkey carving knife.

As big and chewy as this is, it's not overly dry. The finish has some dryness, but this one finishes with a super-sugary caramel sweetness. Very nice.

Eatability - Don't try to drink Hercules with a meal like I did. This is your dinner.

Comments - What a great treat! I'll offer a big thumbs up to BuckeyeNation for sending this out my way.

Update - They finally got this in SoCal in the fall of 2010. This is an amazing beer to say the least. The head was much improved from my initial review, which leads me to believe that the beer suffered a bit from the trip from Ohio. That said, the balance of this ale is amazing and the flavors are beyond reproach. There's really nothing else like it out there in the beer world. It makes the case for a huge DIPA but with grass and flowers instead of the triple C's and gooey malts. It is like no other double that I've ever had and is in a class all by itself. Especially unique is the nose that is very herbal and spicy yet also has a classic DIPA aroma. The aftertaste BTW will entertain you for hours.

Pint straight off the tap into a nice tumbler at a fine restaurant. This was a disappointment, mainly because I felt the taste wasn't well balanced. There's definitely a strong hop profile here - it has that sort of "grainy" mouth feel and sharp bitterness that I don't care for in many strong IPA's. It would have been much better for me if there was more balance with smooth malts and more character with the complex citrus notes that were absent. At 10.0ABV this should have been much "juicier" but the nose revealed more of just another strong run of the mill IPA with lots of alcohol.
I'm not gonna talk it down too much - I think this is just one example of an IPA that didn't suit my taste.

Pours a medium copper amber with medium white head. Smell is very unusual in that it has a grape aroma mixed in a hop forward nose. Reminds me more of a barleywine nose. Sweeter scent mixed in the nose that I can't put my finger on, almost a licorice candy, with slight sweet bread note. Taste has a distinct malt presence that reminds me of malted milk ball. Unusual for a DIPA to be so malt heavy with little hop bitterness to the palate. It's difficult to sort out the different flavors as a result. This is one I need to come back to when it comes out fresh.

Thanks to hoppedup for the bottle,pours a slightly hazy deep orange with a tight one finger head that leaves a nice sheet of lace behind.Wow this puppy is hopped to the tilt intense orange and lemon hit with an underlying pine,big juicy citrusy flavors just bursting out at ya i do notice a touch of nutty malt it barely holds up to the intense hoppiness but its there.A slight alcohol burn is noticable not bad in any way,this beer is bad ass and takes no prisoners,hell yeah.

Amber with a nice head and hoppy aroma. A very nice malty base upon which the hops provide a balanced flavor profile. This is a very enjoyable example of a DIPA.

A somewhat hazy orange to amber color. Clears quite nicely after sitting in the glass. Very nice, puffy white head with some really nice lacing going on. A few floaters from bottle conditioning Im assuming. Big floral aroma. Somewhat grassy and citrus like. You really get the "oiliness" of the hops. Huge hop flavor upfront-very sharp on the tongue. Slight grapefruit flavor. Great body-nicely balanced between hop bitterness and abv. An excellent beer-very drinkable. I could see this being a regular in my fridge.

A tremendous IPA! Compared to other double I's, Hercules pours a thick and almost syrupy look, making me think it will be too sweet. Hazy and orange - rust in color, it forms a thick 1" head that remained. Very perfume-ey, citrus-ey and with intense hop resins. Flavors of hop hits with the sweetness for a very round and well-melded flavor. Though heavy on the toung, never cloying or tackey feeling. Intense citrus flavors without the tartness. Ripe oranges, lemons, and grapfruity. Throw in peaches and pears for good measure. Spicy but not bite-ey. Good pine-ey flavors without grassy-ness. Overall, a beautiful beer. Finishes sweet and a bit dry. I can't recall having a better IIPA.

Pours a hazy copper with a huge, sticky, off-white head. Initial smell is of citrus (mainly grapefruit). Taste is grapefruit, slight sweetness, and a sharp, bitter hop finish with perhaps a little pine flavor. Little alcohol burn in the taste but I can definitely feel the effects as I finish. Drinkability is good for the style, I could do a few of these in a row.

A solid DIPA - avoids the oversweetness that some in the style exhibit. This one will stay in the rotation for now.

A: Dark amber, with a tannish head, with quite a greenish-style hue, with excellent Belgian-style lacing.

T: Big grapefruit and other citrus notes, balanced by a good caramel malt background, with a fair amount of warming alcohol.

D: A good beer, a good Double IPA, in my opinion a little too malty for the style, but that is a minor complaint. A big beer, though, one bomber is more than enough for me.

A: Orange-copper with a full apricot colored that slowly gave way to a dollop in the center. Thick sheets of lace are left all the way down.

T: Toffee and sweet caramel malts are blended with pine and citrus. Robust hop flavors balance surprisingly with the malt.

M: Full bodied, big beer. A better finish away from being a 5 in my book

D: 9.1 ABV and the finish keep this from being more drinkable. I was one-and-done with my bomber. The balance guarantees a repurchase.

A- Bright, deep copper like a year old penny with a bubbly, lacy dark tan head. The final pour of the bottle left a head that looked like a foam mattress in cross section. Just by looking at this brew you know you are about to get a palate wallop.

S- Big, alluring aromas soar out of the glass: toasted coconut, vanilla, pina colada, peaches.... Very seductive. It would be one hell of a challenge to have a sniff of this and not take a big sip.

M, D- Viscous, sweet malt & oily hops, both thick, heavy, and extracted, are so rich that this a slow ride. Massive but supremely balanced!

Bottle is marked as being bottled in April of 2007.

Pours a clear dark orange hued and semi viscous liquid. With a tight white frothy and bubbly head. The smell is very sweet, the hoppiness that comes out is some orange citrus and sweet flower. The taste packs a large up front and lingering bitterness. A quite resiny hoppiness is comes out during the sip while a bit of floral hops comes through in the aftertaste. Alcohol is slightly present.

Mouthfeel- Medium. Tastes pretty similar to a lot of other DIPA's that I can remember.... Ballast Point Dorado, Avery Maharaja (kind of), Alpine Exponential Hoppiness.... all these are syrupy sweet DIPA's but the Hercules packs a little more bitterness to it. Not my favorite type of DIPA. Based on style I cannot rate this too low. Based on what I prefer in a DIPA I have to grade it a little lower.