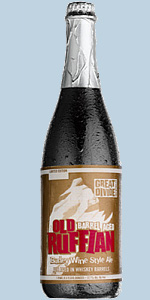 A - Pours a murky reddish brown with a one finger creamy off white head. Heavy soapy lacing.

O - This is a nice whiskey aged Barleywine. The flavors are on the boozey side making this a slow sipper.

2011 bottle. Wow, shocked at how well this held up. Cap was a bit rusty but hissed nicely upon opening and poured a cloudy ruby/brown with very little head. Great feel with the right amount of bitterness and tons of vanilla, dark fruits and just a nice touch of barrel. No need to rush on cracking this open, it seems to be holding up just fine.

Bottle #233/461. Bottled August 2008. Midway between brick red and burnt orange with a gem-like glow and diamond clarity. The upper third of the chalice is filled with a luscious crown of buttered wheat toast colored cream. How can a barrel-aged ale with an ABV this high generate so much outstanding looking lace?

The nose is beautifully balanced between barleywine and whiskey. Stranahan's Colorado Whiskey (aged 9 months) to be exact. Each sniff delivers melted caramel, all sorts of liquor macerated fruits, a mild oakiness and a bit too much ethanol to be granted a perfect score.

Great Divide Old Ruffian (along with Midnight Sun Arctic Devil) is my favorite barleywine of all-time. A large part of that love is due to the perfect combination of huge malt and huge hops. This bottle of Barrel Aged Old Ruffian, now 46 months old, is too long in the tooth to still be a hop monster. Granted, that's my fault for aging it this long.

It's still incredibly beautiful beer, but it's an entirely different beast. Whiskey barrel aging will do that. GDBC nails it *much* more often than not. Such is the case with the amount and quality of the whiskey influence in this Limited Edition brew. As an aficionado of both big beer and America's finest spirit, I hereby pronounce the balance to be... dead... solid... perfect.

As expected, the various flavors are becoming bolder and deeper and more complex as the starting chill seeps away. The rundown includes gooey toffee pudding, golden brown sugar, candied cherries and sugared orange peel, vanilla-soaked oak, and a small shot of Stolichnaya. It has to be extremely difficult to completely bury 12.7%. That said, it does put the score ceiling at 4.5 for taste and drinkability.

The mouthfeel is a little more chewiness away from being outfreakingstanding. Inventing words is fun, and is easier once the alcohol begins to take hold. Each sip is pure pleasure. The carbonation is understated, yet still committed to the cause.

While BA Old Ruffian isn't as mind-blowing as BA Yeti, it's still a remarkable ale that I feel incredibly lucky to have experienced. Thanks to JMBSH for both bottles. I would still take the original over this beer (and 99.9% of all beer on Earth), but BAOR is definitely one of the best of 2010 so far.

look: Deep Red-copper. Quite a big creamy tannish head on the pour. Messy lacing. Quite a looker.
smell: More malty, caramel and whisky notes. The hoppy bite of the base beer is muzzled. Rich.
Taste: Barrel aging has turned this into an English imo and not complaining. This is rich, full, loads of disparate but nicely blended flavors like vanilla, whiskey, malt, with a still a slight hoppy bite in the finish.
overall: Well done indeed.

Bottle in trade from Adam. Big thanks for a big want to a great trader. Looks like an ’11 on the bottle so I am assuming this is a 2011 bottle, 750 ml, poured 8/17/14. Bottle #1113. Pours muddy brown with a creamy two finger off white head. Awesome aroma of whiskey, oak, vanilla, interestingly some chocolate here, toffee, and lots of figs and some brown sugar. Flavor is big time bourbon but super smooth, oak, massive vanilla tones, figs, brown sugar, some caramel, lingering vanilla oakiness. Medium to heavy bodied, medium plus carbonation, smooth finish with nearly no booze burn. Wow this is really nice.

A - Deep, complex, murky reddish-brown, with a finger or so of off-white head. Quite attractive.

T - Wow, this is good. Lots of buttery almond and hazelnut (similar to the regular Old Ruffian, but more so), plus loads of smooth bourbon, vanilla, caramel. Very delicious. The slightest bit of alcohol in the finish.

M - Velvety smooth, nice and thick. Not much carbonation, but that doesn't detract at all.

Overall, this is great! I was expecting a good beer, but ended up being blown away. This is one of the very best examples of bourbon-barrel aging I've ever tasted (up there with bourbon-barrel Fourth Dementia). Damn.

This is going right back on my want list.

A: Pours an extremely dark blood red with a thick dark tan head that receded into a thick film that left soapy, wispy lacing.
S: Rich caramel malt, slight hops still, very sweet overall. Some vanilla and maybe oak, caramel and sweet malt.
T: Sweet malts overall, similar to the non-barrel aged version but with notes of whisky in the finish. Alcohol is fairly muted at this point though. Notes of tobacco and vanilla in the aftertaste.
M: Creamy rich full body, low carbonation and a syrupy mouthfeel. Slight alcohol warmth is still present.
D: Goes down easy enough but I wouldn't want a ton of this. I was happy with the pour I got. Love the regular version, and this is definitely a delicious brew. Thanks again Jeff for your generosity!

Had a little barrel aged barleywine tasting at MADhombrewer and Witchsbrew's residence last night. Filet mignon's were provided by our host's for TulipSnifter and I. Thanks guys!

In the lineup were Central Waters Bourbon Barrel Barleywine, Hellshire I, BA Hi-Fi Rye, BA Old Ruffian, Abacus, and Alpine Great. Our intention was to also open up Perfect Storm '09, Mother of all Storms '10, Kuhnhenn BBBW, and Arctic Devil but we agreed it best to hold off on those beers for another day due to palate fatigue. Small two ounce samples of the six beers from last night were first tasted and notes were taken before returning to the bottles for more tastes and refined notes.

Thanks to jophish17 for supplying me with a bottle. 2009 batch.

I don’t have my typical review lined up for this beer because I fear it may have been an off bottle. I’m giving it all 1.0’s to reflect exactly how bad I felt this particular bottle was. No “pfft” on the cap-crack had me thinking that this was simply low on the carbonation. Pouring the beer as hard as possible revealed zilch in the way of carbonation in the puce colored beer. The body was thin and watery to boot which has me thinking something was just flat out wrong here. Smelled like generic malt and tasted like watered malt that had wet whiskey barrel dunked in it. Some slight sourness and acetone suggests a possible infection. I can’t give the standard smells and flavors that I usually report because it was so off and weird. If I was guessing, 600 of the 750ml’s ended up going down the drain. I’ll try this again if the opportunity presents itself but no way am I going to trade for another.

Appearance: Pours a thick , almost opaque (yet extremely bubbly) cherry and mahogany-toned dark brown. It's odd how the light carbonation bubbles really show through in this brew for how dark it is--the only other color evident is only seen when held up to the light. Little to no head is evident (no surprises) but there's a thin, creamy ring of large, creamy bubbles around the edge of the glass. Looks very woody, but it's hard to describe exactly what that means. Almost no lacing--there's a tiny bit of fizzy bubbles that slink down the side of the glass, but they disappear quicker than any I've seen before.

Smell: Smells predominantly of oak, cherries, and earth, in that order. Also evident are spiced and rum soaked dark fruits, particularly raisins. The alcohol doesn't make itself particularly apparent in the nose--there's a hint, but it comes across as a sweet, cinnamon spice. The scent, as a whole, comes across as very light, spicy, and nice, and not overwhelming in the slightest. After I've tasted it and go back to smell it again, there's a metallic note as well.

Taste: The taste is not particularly alcoholic, either--tastes of whiskey, earth, and oak, but is not in itself particularly hot. The fruit from the smell is not as apparent here--it's present, but in very small amounts in the background, and the cherries are not present--just raisins and prunes here. There's also an ever-so-faint hint of caramel there, as well as sweet, malty flavors. There's a slight hop aftertaste, but it's barely there. Overall, a bit watery for a brew that I would have expected to be much bigger. When I pair it with food a lot more tastes begin to come through (oddly enough), particularly the malt and sugar notes, as well as piney hop notes.

Mouthfeel: I can't say I'm a huge fan of the mouthfeel on this--it's pretty damn flat, which is odd considering all the initial bubbles that were present. However, the ABV is hidden very well, leaving you with a brew that is only slightly hot and has little to no aftertaste. That in itself is pretty remarkable, but I'd like to see some tiny carbonation bubbles here--otherwise, it goes down a bit like flavored water, though it is quite smooth. I think that even slightly more carbonation would bump up the score of taste and mouthfeel on this one quite significantly.

Drinkability: very drinkable--goes down smooth with almost no alcohol evident--which I think is spectacular given the high ABV. Nicely done here.

2009 bottle poured into a tasting snifter.

Pours a red amber color with hardly any head at all. The smell is sweet and malty with just a touch of hops and alcohol. This definitely tastes like it has some age on it. The barrel characteristics have smoothed, but the bitterness level is still quite high. The sweet malt overtakes the bitter in the beginning of the sip, but the bitterness crushes the finish. The body is too thin with no carbonation.

It pours a deep copper brown, with two fingers of beige head. The nose bursts with bourbon, vanilla, toffee, molasses, booze, and a faint hop bitterness. The flavor is bitter, sweet, slightly smokey, and rich with bourbon. The mouthfeel is mildly thin foe this much alcohol, but i find the heftiness of this base beer really holds up quite well to the bourbon barrel aging. A superb beer.

Had this at a tasting about 2 months ago, just getting around to adding this. Real treat to try, since this was the first tasting I'd seen it.

O: Decent, but not great frankly. Might pass if offered again, but would like to try a fresh or 1 year aged bottle for comparison.