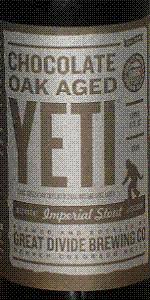 Notes: Chocolate Oak Aged Yeti Imperial Stout is another revered incarnation of our legendary imperial stout. We toned down the hops a bit to allow cocoa nibs to contribute some pleasing bitterness, while vanilla notes from the oak combine with the cocoa to create an aroma and flavor akin to a gourmet chocolate bar. A dash of cayenne keeps things lively, adding just a bit of heat to the finish. Another great Yeti? Hell yes.
View: Beers | Place Reviews
Reviews: 917 | Ratings: 3,128 | Log in to view all ratings and sort
Reviews by FBarber:

Thick gorgeous pour of a deep flat blackness. The head was a thick congealed cloud of dark brown foam.

The nose is a touch lighter than I expected with a dry chocolate malt, whipped cream, vanilla, roasted coffee and smoke.

Mmmmm, dessert! You get chocolate and the taste of an after dinner coffee at the same time. There is a bit of spiciness, like a Jalapeno heat, with some Graham cracker maltiness, roasted ember, caramel and maybe toffee.

This is rich and thick with a tinge of alcohol and spiciness.

Saved a good one for my 1000th review, but I knew that Great Divide would deliver!

On tap at the Oak cafe - 2010 vintage. Pours a black super-nova color with a luscious and creamy looking deep-tan head comprises of bubbles so fine you can barely make them out. Good staying power and retention, though the lacing was minimal overall.

The aroma creeps out before you even bring this one to your nose. A deep, chocolate aroma hits your nostrils first - a sinister hybrid of sweet milky chocolate and bitter dark chocolate. An oaky, wood chips sweetness follows it up and keeps things leveled out. This one simply smells rich and robust, like a triple chocolate lava cake meltdown served on a burnt oak platter.

Chocolate Oak Aged Yeti hits the palate smooth and silky, thick, but not to the point of being chewy or sludgy, although it surly can hold its own. The canvas is constructed of heavy oak flavors and even some bourbon notes. I don't know if the barrels this was aged in previously held bourbon or not, but I wouldn't be surprised to find that out. Succeeding sips reveal an even more deep and dense chocolate flavor than the aroma would lead on - like a bittersweet, rich Devil's food cake or a melted Godiva chocolate bar.

As sweet as it sounds, it's never cloying, as the sugary explosion is held in check by the bitter side of the chocolate, as well as the robust and borderline-bitter nutty and dark chocolate aftertaste. Notes of char reside at certain places but don't take up too much of the bill. As the beer got warmer, a certain spice flickered up, almost herbal and ashy. Apparently it's chili powder? I wouldn't have guessed that - it almost could pass as an intensely dry hop profile. Not distracting, just slightly unexpected. Great carbonation, then again, it was from a tap.

Wow, I'm glad I finally got to try this one. On tap, nonetheless. And the 2010 version. Good night for me, I suppose. I think I prefer the Espresso counterpart to the Yeti series over this one, although it's been a while since I've had it. This one was no slouch, however. I have a feeling the entire Yeti series is worthwhile. Now I must seek out the rest.

Serving: Poured from a 22oz bomber into a tulip glass.

A: Perfectly black with a nice red hue dancing around the edges. The thin head fizzles
quickly and offers no lacing.

S: Chocolate notes hit up front, followed up by coffee, malt and spices. I detected hints
of raisins or some other dark fruit as well.

T: A wonderful mixture of vanilla and chocolate hit the tongue first. Then the secondary
but yet equally important second wave comes knocking and says "hello, there's cayenne
and holiday spices in here too". The aftertaste is the all important Imperial aspect of the
beer, finishing the experience with a satisfying "wow!"

M: A little dry on the tongue but with the appropriate amount of carbonation.
Nice and chewy, however.

O: Just like the other beers in the Yeti line, this one is another winner. The combination
of the ingredients perfectly balance out into a highly drinkable stout, perfect for cold
nights spent next to the fireplace, drinking more bottles of this brew.

Cellared for over a year.

Poured from the 22 oz. bomber into a Samuel Adams nonick.

a; Opaque black with an inch tall tan head which receded to thick even surface foam and dense patterned lacing.

t: Espresso and dark chocolate followed by a sharp bitterness. Some throat burn from the high ABV. The coffee flavor may mask or blend with any taste coming from the oak aging, although some of that seems to show up later as a smoky woodiness in taste and aftertaste, as does the cayenne pepper in the form of a lingering throat burn.

m: Full and smooth. A beauty, just what a stout should be.

The beer pours a pitch black color with a thick frothy tan head that slowly fades to lacing. The aroma is great! It has an aggressive oak character that compliments a subtle dark chocolate aroma. The taste is good. It has a sharp black malt bitterness that really hits you up front and carries through to the finish. The chocolate character isn't too pronounced, but it's noticeable. The oak aging adds excellent flavors that are quite complimentary to the black and chocolate malts. The mouthfeel is fine. It is a full bodied beer with adequate carbonation. This is a good drinking double stout. The chocolate character could be better. The oak aging seems to squash the chocolate theme.

I had previously had the Espresso oak aged Yeti but had not had an opportunity to try this one. Although there are many, many barrel aged stouts I have had that were better, this had a nice, sweet, oak taste that made it very enjoyable to drink.

Beer poured black as night with a nice brown head upon initial pour.

Nose is malty with some hints of cocoa.

Taste is malt forward with cocoa as the centerpiece. Hops linger in the background, finish is hot from the cayenne.

Overall this is a pretty good variation of Yeti, definitely fun to try.