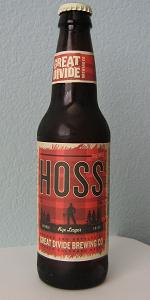 Notes: HOSS is based on the Märzen lagers of Germany. Rich, layered malt notes, with hints of cherry and dark fruits, dominate, while the unique addition of rye imparts a slightly earthy, spicy character. Hoss finishes crisp and dry, and its brilliant red-orange color is a toast to the sunsets that make the perfect backdrop for this beer.

A: Pours a dark yet clear copper color. The head is a little over a finger high, with an off-white shade. Its texture is more fluffy than creamy, but it still retains well. Nice rings of lacing are left on the glass.

S: Primarily, the aroma is caramel with some spicy rye and a touch of earthen hops. Rye comes out even more as it warms up. There isn't a whole lot to the nose, but what's there is definitely serviceable.

T: The malt backbone is stronger here. It opens faintly spicy - think rye and Centennial hops - and ends with a pleasant caramel finish. Not just caramel, but even some chocolate. A twinge of hop bitterness returns on the aftertaste. At times, it has a mineral quality to it. It's not an intense beer per se, and I wouldn't have it any other way: the hop/malt balance is delicate and defined in all the right ways.

M: It's coarse and prickly, though not out-and-out sharp. For some reason, this seems to make the body thicker than it really is. Still, this is a nice and drinkable marzen that doesn't rely on overdone carbonation to achieve that.

This is an attractive and easy drinking beer. Although this is billed as a lager, it lacks the acidity and sourness associated with lagers, perhaps because of the rye. So far, the best beer I’ve had from Great Divide.

Look: A nice 2 finger head from a medium pour out of a 12 oz. bottle. The head diminishes and leaves some spottly lacing; still fairly bubbly throughout. The beer is a beautiful crystal clear copper color.

Smell: There is a spicy smell mixed with some caramel notes. Very caramelly and rich.

Taste: There is a nice spicy deep rye tang and a slight hop bite that hit you right at the front. There is a nice balance of flavors: sweet, malt, and caramel. Slight tartness makes an appearance amidst the sweetness, then fades with some floral hop notes.

Overall: Enjoyable rye brew that isn’t too heavy on the rye and well balanced. Bought this as a single in a mixed-6-pack, but would not be afraid to buy a full 6.

Appearance: Pours a brilliant red color with a slight haze.

Overall: The aroma contains a nice sweet caramel and cereal grain. The Hoss contains flavors of spun sugar, honey, bread, and orange peel. This is a fantastic beer with a unique flavor and lots of it! The Marzen style of beers is quickly becoming one of my favorites.

Pours a deep clear golden with some amber hues. Thin head and light lacing. Nose is malty with notes of spicy rye and neutral lager yeast. Some earthy grain notes as well. Flavor is subtle with rye malts coming forward and no hop character to speak of. A slight spiciness towards the end. Mouthfeel is light and moderately carbonated. Overall, decent flavors, well balanced, and easy drinking.

I am continuing to winnow down my backlog, especially of bottles. This one was either purchased at The Friendly Greek or dropped off by tone77, but those are really the only two possibilities.

From the bottle: "Layered"; "Crisp"; "HOSS is based on the Marzen lagers of Germany. Rich, layered malt notes, with hints of cherry and dark fruits, dominate, while the unique addition of rye imparts a slightly earthy, spicy character. Hoss finishes crisp and dry, and its brilliant red-orange color is a toast to the sunsets that make the perfect backdrop for this beer."; "Bronze Medal, Great American Beer Festival, 2009"; "Suggested Food Pairings: Veal bratwurst, barbecue chicken, carnitas (pork) tacos, Camembert cheese, German chocolate cake."

My initial, aggro pour created two fingers of dense, tawny head with moderate retention that created some great lacing as it fell. Color was a filament-bright deep-copper (SRM = &gt; 13, &lt; 17). Beautiful! Nose had a rich, malty scent, but I was not getting the fruitiness the label mentioned, at least, not on the nose. Mouthfeel was soft, slightly bubbly and now I did get a distinct cherry flavor on the tongue. Wild! The rye manifested itself on the dry finish, giving it an earthy balance to offset the malts. This was MUCH better than I anticipated and probably one of the best beers of the style that I have encountered. Great lacing formed as I drank through it. I would definitely be interested in having this beer again.

Appearance - Pours crystal clear and bright red-tinged copper with a half finger width, sandstone colored head. Poor retention, resulting in a razor thin, broken layer of suds across the surface.

Smell - Bready, with notes of fruity esters. Hints of caramel.

Taste - Spicy notes from the rye met by strong caramel flavor and a touch of toasted bread. Mild, cherry-like fruitiness sit beneath. Finishes with well-rounded blend of flavor that begs for another sip.

Overall - Unique, delicious Okto. I could stand to drink more of these. The rye really adds a nice spicy touch while the caramel is smooth as butter. Come on Great Divide, get into the NorCal market!

Picked this up because this is one of the few Marzen/Octoberfest beers that I haven't had that was available in my neck of the woods. It was a bit stronger than I imagined it would be, but it was still enjoyable and not as thin as some of the other beers that fall into this category.

Decent pour to this - a bright almond hue, some head, and practically no lacing were the hallmarks of the beer. The taste was that of rye, cherry, and some English-like warming hops. Nice cabonation and mouthfeel, this beer was pretty well balanced and well-suited to the cool nights that we've had here lately. As I already mentioned, this wasn't as thin as other beers of this style but there's not a lot of complexity here either. That's probably where some reviewers are let down but for October, this fits the bill just fine!

The 6.20% ABV is a bit stronger that I would have liked it to be but I could see myself having a few in one setting. The mouthfeel to this leads to a good consistency and once again, Great Divide has a beer on their hands that I've enjoyed. This could be the most middle-of-the-road beer that I'll have until the darker offerings hit the shelves...

Smells of caramel, a big sweetness sugar like candied sugar and brown sugar, toasted grains, rye, funky metallic notes, pepper and wet bread which resembles cardboard. More exciting than most Oktoberfest noses, the rye is a nice spicy addition to the basic caramel nose of this style.

Tastes like rye and toasted grains up front, mixed with pepper, caramel, malt, dry grass or dry leafy hops, biscuit, light fruity notes like a lemon zest and wheat bread. The rye and spices cut through the malt and add an almost hoppy-like balance to the brew, which made it a better and more flavorful version of this style.

Mouthfeel is medium overall and yet feels watery with mild carbonation, a medium body and a nice malty semi-dry finish that trails with a nice combo of sweetness and spices. This hides the ABV completely and was easy to drink, I really like this version of a Märzen/Oktoberfest and will definitely have it again.

Purchased at Liquor Locker Weinbach location in Evansville, IN. Bottled on 6/25/2010. Poured from 12 oz bottle into a nonic pint glass.

S - Very heavy on the malts in the aroma with some caramel and spice notes.

M - Oily with a thin to medium body.

Not a bad beer. I see this pairing well with certain foods.

taste is a combination of grass, young green broken branch of a deciduous tree, some light floral notes, and even lighter corn.

feel is full-bodied, medium to high carbonation that dances on the tongue, which also comes across as mildly noticeable alcohol presence. body and carbonation compliment each other well. crisp.

drinkability is high, a refreshing and flavorful lager.