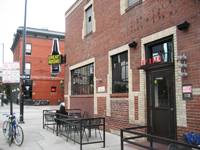 Downtown Denver is a weird mix of one way streets and something called 'no double turns'. This place is on a one way street that you have to do a lap around the block from the direction we were coming. And then we found out they don't open until 2pm.

Once the time was right, headed back over. Man, it was already packed. Went twice during my week in Denver, and uh, it was packed both times, no Rockies games going on even. And its packed for good reason. Good stuff. Probably seats 12-15 at the stainless steel bar, some standing seating against the wall, a few booths in the room connected to the bar.

Impressed they had a few kinds of Yeti's available (Choc, Belgian, reg). Samarai was actually really good. $26 for a bottle of BA Old Ruffian. They had this deal going on where you could get 3 tasters for $3. Yeti's included. Talk about your awesome, cheap drunkening. Cool tour. I don't think I've seen so much brewing capacity packed into such a small area before. Service is good, informative.

Like I said, I went to this place twice in the span of 4 days. Worth a visit or two.

This is the actual brewery; it is a cozy and rustic place that offers a great selection (15 taps) of Great Divide crafts. The bar area is small, but comfortable. It is located just a few blocks north of downtown, and is worth the trip if in the area. There is a taproom in the RINO district as well. (See Review)

First stop on GABF trip 2018. Had a few beers on the patio then got chased indoors by the rain.

Convenient location and solid beer. Nothing earth shattering but worth a stop.