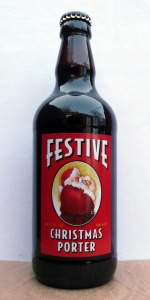 Poured into a tulip pint glass. Bottle conditioned. A very dark ruby-brown hue that appears black in the glass. No obvious carbonation (worrying). Forms a small head of frothy foam that dissipates almost immediately. From this beer's appearance I'm concerned that it might be oxidised. Aroma of sweet, fruity malt with hints of prunes, dried fruit, Christmas cake, brown sugar, caramel and ale yeast. Little to indicate that this is a porter. There is a twang of tart apples and mild vinegar in the background. The overall effect is reminiscent of homebrew - not brilliant.

Tastes of fruity malt with a watery, yeasty character and a dry finish. Notes of prunes, dried fruit, brown sugar, Christmas cake, caramel and yeast. There is a tartness lurking in the background that hints at sour apples, cider and faint vinegar. A mild, dry finish upon swallowing. As with the aroma, the flavour reminds me of badly-made homebrew. Mouthfeel is smooth but thin, watery and completely flat. No texture. Aftertaste of sweet, fruity yeast and a vague sourness.

Deeply disappointing - I had high hopes that this would be a cut above the many other mediocre Christmas brews. It seems oxidised, though I don't know if this affected the whole batch or if I just had a bad bottle. Faintly sour and vinegary. A basic 'beer' character is present but there isn't much in the way of dark/roasted malt - it tends towards fruity and slightly sweet. It's hard to tell what the brewer's intentions were, but I've reviewed it as I've found it. I might revisit in the future if I have a chance. If you find any bottles from this year, give them a miss.

Reviewed by seanyfo from Scotland

A- Little to no head, black as the night, looks like a pint of cola, no light getting through.

T - Christmas cake again, with rum and raisins, but a nice bready biscuity malty base comes through in the taste.

M- Low carbonation, full bodied but seems to get more watery the more i drink it. Not served too cold either.

D - The smell was delightful and so were the first few sips, but i felt it lost character and flavour the more i took, seemed to get watery.

I paired this with some vollmich ritter sport chocolate, which hid the wateriness and made an overall enjoyable experience