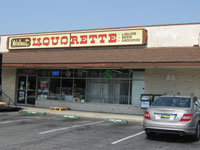 View: Place Reviews
Reviews: 48 | Ratings: 63 | Log in to view all ratings and sort
Reviews by Beerandraiderfan:

Looks like a regular convenience mart from the outside. Tons of trash in the adjacent empty lot next to it.

Lots of coolers worth of beer, if I recall correctly, all, or a substantial majority of the beer is in the coolers. No help from employees. No offerings of the 'secret' beers.

Alpine Nelson I found there was horribly out of date. I find this place to be decent, but overrated on BA.

Traveling from the East Coast - was impressed with the variety of craft beer. Your usual Green Flash, Sone & Lagunitas plus the complete line of Dogfish Head. Also about 5-6 of the West coast breweries I've never seen. You will find something here. Tony was sympathetic to our plight for Pliney and pulled some strings so I could try! Over and above!

Keep in mind this is a liquor store; not a volume discounter like Bevmo and Total Wine. Thus, prices will always be marginally higher; but I don't think it's significantly higher to dissuade me from coming here. Usually, we're talking about a buck extra for a sixer. I will also open with a caveat that I went to high school down the street, but I don't really think it affects my judgment since I didn't step in the place until I was 22. I guess you could say it was my introduction to craft beer. When I was 24 I moved up to SF for a few years, learned a bit more about beer, and when I moved back down after school I noticed that a Bevmo had opened up down the street.

I was initially scared for Joe and the liquorette because of the competition, but as my beer knowledge and palette began to grow, I realized that Bevmo's offering were sub-par, particularly when I started to visit the liquorette more frequently since they had a better selection of quality beer. Whenever I walk into Bevmo now (or used to walk into Bevmo), I don't find anything that is particularly astounding like I do when I visit the liquorette. So, I'm not so afraid anymore for this store that's been in my hometown forever; it is hands down better than Bevmo, particularly for the amount of high quality craft beer available:

Bruery? They were one of the first accounts ever, and when I last visited they had at least 10 different bottles. I routinely find gems that I think are underpriced. Joe says it's because he likes to do that for the knowledgeable beer-dude. I half believe him, and the other half believes that it might just be a simple price-marking mistake, but in any case, look hard enough and you will find a steal! In any case, Joe has more of a selection of Bruery beer than Total Wine! Not to mention, you can find some aged bottles too!

Hair of the Dog!
Pliny! If you ask nicely and are a consistent customer known to the Joe.
Lagunitas Sucks! Great selection of Lagunitas beers, including Sucks; currently has about 9 different 6-packs and about 9 different bombers.
Ten Fidy!
Vast selection of Stone - including some vintage bottles like a 2011 RIS that I've been eyeballing!
Alesmith Old Numbskull & other good stuff!
Sculpin!

Only desire: Weihenstephaner! But I don't know the subtleties of that beer's particular distribution so I can't judge.

Come to the liquorette, browse all the cabinets, and you WILL find something awesome; be it fresh, or some gem from a few years ago that no one has bought surprisingly. Found a couple year old Autumn Maple from the Bruery for a ridiculous price! In any case, Joe is one of the friendliest, knowledgeable, and honest guys in the local beer scene. Ask him for a recommendation and BOOM amazing beer.

I visited Walnut Liquorette after reading reviews here and other sites.

This is a quality liquor store that is heads and shoulders above your typical liquor stores. They carry your local craft beers along with some harder to find ones.

Ive been here a few times and they have great service and a great selection. Joe knows his beer and will help you find what you need. Some of the beer is a bit over priced but yyoi can also find some great deals. If your in the area stop by and check them out

My parents were in SoCal and I did some research here on BA as to where (in the area they were visiting) they could stop and pick up a few things that aren't distributed in my state. They received EXCEPTIONALLY friendly and helpful service from Joe when they stopped at the Walnut Liquorette. Joe assisted them in grabbing me Victory at Sea, Pliny the Elder, Old Numbskull, Sculpin IPA and a few others.

I was recently introduced to Walnut Liquorette. I'm new to the craft beer world and fell in love with super HOPPY beers (IPA). I was referred to Joe, and he's been real helpful on which IPAs to try. Every week, I visit Joe and ask him what new IPAs to try. He'll then recommend me a few to try.

I went from a Stone Ruination lover, to newly discovered, Avery Maharaja, Ale Works Noble Nobility, Ballast Point El Dorado, Ale Smith Yule Smith, Port Brewery Mongo, and lastly Russian River Piney the Elder. Been going there once a week for the past 2 months. I love the selection, service, and everything about Walnut Liquorette. Joe has a customer for life!

man where and how can i start. first thing is walnut liquorette is a world class store and the selection is outrageous, but prices are to high i saw parabola for $26.99 when regular price is $15. second joe knows his beer he has all kinds of surprises in the back if he knows you are willing to spend money joe could hook you up. make sure joe is there cause the other staff dont know that much about craft beer. they have hard to get beer here and alot to choose from. good service if joe is there and clean store.

Finally I made it to Walnut Liquorette, after 5 years of intentions. Most often I don't drive this direction when in LA, luckily I had business in Pasadena this time.

First off, Joe is awesome. Very friendly and helpful in every way. I told him I was from OH and he made a point of asking what breweries I couldn't get back home. Reason being he has some good stuff in back that he has no problem offering to a beer geek.

All the beers are in coolers, separated by brewery. After stopping at a number of other places I was really happy to see several selections from Russian River. Prices were average on some beers and maybe a little high on others, nothing crazy though.

Next time I'm in the area I'll be sure to stop here again (although it might be another 5 yrs).

I have been visiting (and patronizing) Walnut Liquorette for the past couple years and have been consistently impressed by the quality and selection.

From the outside (and, frankly, from the inside) it looks like a fairly standard, albeit a bit dingy, liquor store. The beer, however, is all very well displayed and most importantly, is all in coolers in the back.

Selection is about as good as you can ask for. Not only are the standards there (Stone, Russian River, Lost Abbey, et al.), but if you're looking for something special, theres a good possibility that Joe has it hiding in the back.

Speaking of Joe: he's awesome. Always ready to talk beer, sports or whatever. He'll answer any questions you have and will gladly make suggestions.

One one pretty big criticism is the skyrocketing prices of some beers. It's been fairly well established that the prices here are a couple dollars more than other stores, which I'm ok with. You pay for quality. But I take issue with charging $40 for Old Stock Cellar Reserve, $28 for Abyss and overall outrageous prices on other "rarer" brews. It makes it prohibitively expensive to pick these up. I will say, however, that this is more the exception and not the rule to most of the prices.

Overall, I'd say that Walnut Liquorette is one of, if not the best choices to find a consistently excellent selection of beer in the North OC/East LA area. Just check the prices before you buy!

Walnut Liquorette in Walnut, CA
Place rating: 4.58 out of 5 with 63 ratings