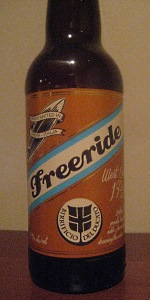 Notes: None
View: More Beers
Recent ratings and reviews. | Log in to view more ratings + sorting options.
Rated: 3.5 by GoHabsGo from Canada (ON)

Rated by Dutchcraftbeergeek from Netherlands

Rated by kscaldef from Oregon

This beer pours an obviously bottle-conditioned hazy pale golden amber hue, with a teeming tower of puffy, airy, and tightly foamy eggshell white head, which leaves a loose band of bike chain lace around the glass as it slowly evaporates.

The carbonation is still pretty active and acerbic in its swirling fizziness, the body medium-light in weight, and smooth, I suppose, once that overbearing saison-esque bubbly character slowly eases off. It finishes rather dry, the graininess of the malt dropping the vast majority of its sweetness, the hops latently stepping up their game.

Yeah, even at this end juncture, there's still an admittedly attractive lazy ice-cream cone swirl of head still sitting in the glass, which quietly says a lot about one's experience with this offering. Sure, there's a few missteps in what these paisanos consider a west-coast American IPA to be, or perhaps they're limited by their resources, but uber-alles, it's the bubbles that linger with this one.