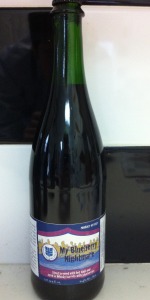 Notes: An extension of Birrificio Del Ducato's Verdi Imperial Stout - My Blueberry Nightmare is a stout brewed with hot chili, then aged for 2 years in oak barrels with blueberries.
View: Beers
Reviews: 58 | Ratings: 272 | Log in to view all ratings and sort
Reviews by portia99:

Italian Beers get a bad rap. Especially because Italians drink them, and the beer scene over there is still growing, so a lot of Italians aren't used to extreme beer.

If someone who's not really into beer tries most of Ducato's offerings, they might find it repulsive.

Ducato truly encompasses the idea of 'artisanal' beer. For this reason it takes quite the palate to appreciate the complexities of their creations. And I promise I only sound like this much of a snobby cunt when talking about Italian beers.

This is batch #4. Can't tell how old it is - Italian brewers aren't the best at dating their bottles.

Its base beer is (I believe) Ducato Verdi, which is the best stout coming out of Italy in my opinion. Brewed with some chiles, but they only add a bit of extra complexity; it is by no means a chile beer. This stout is then aged on blueberries in (I believe) some sort of oak whiskey barrels for two years. The souring yeast is not brettanomyces but rather pediococcus. This gives it a different sort of tartness.

On the nose, very sour (but not the same brett sour we're used to with things like OEC's beers). I can actually smell blueberry.

Taste is first a quick hit of sour, follow by a wave of juicy tartness. It doesn't scream blueberry unfortunately, but not many sours do. I do get hints of that berry flavor. It mellows out and you can pick apart all of the complexities; the oak is strong, but there's a bit of whiskey-ish barrely notes (if that makes sense). The end is the best part; aftertaste stings just a bit with that lingering chile.

Overall, a truly unique beer. I was hesitant to try it because of the Italian price tag (and because, no matter how much I love Italian beers, some are big hits and others are big misses). I'm glad I did.

My ending message: Don't pay attention to ratings on these sites when you're looking at Italian beers. Many of the ratings are from people who's craftiest beers are Guinness and Hoegaarden.

Had this last night on tap at Ebenezer's, served in a tulip glass.

A: Looks like a stout almost, but has a slight blue hue. 1/2 inch of head lingers a few minutes before dissipating. I was surprised how dark it was.

S: Blueberries and vinegar. You can tell there's sourness awaiting.

T: Again, blueberries dominate, along with the sour element. There are also very subtle hints of oak, but they're overpowered by the fresh wild blueberry flavor. While drinking this, I had no idea the alcohol was 11%....it's hidden incredibly well. I've had several blueberry beers in the past, but this is by far the best.

M: Very nice for a sour. Certainly not watery, and leaning a bit more toward the creamy end.

Overall: I don't understand nor agree with a few of the low reviews of this beer. I'm guessing they're from people who don't appreciate the sour style. I found it to be fantastic and cannot wait to have another poured at Ebenezer's today. I usually gravitate toward the IPA's, but if this is what a sour can be, count me in as a fan.

Deep, dark and delicious. Unique blend that results in a memorable sour blueberry malt with a tasteful touch of seaweed. The feel is a pretty dead but I love the unusual flavors.

Complex. Crazy lactic sour, draws all the moisture from your mouth.

Complex and wonderful - amazed by the low reviews.

This beer is a happy hot mess and that's why I loved it. Is it a blueberry sour or a chili stout? A clash of four flavors. It's not pretty, but boy is it interesting.

This is review for Batch #3 aged athe least 4 years in the bottle.

Pitch black color. Zero carbonation. smell of the hot chili's up front, followed by the sour aging smell that they used to age the beer (much less sour smell then originally have went firsto tasted years ago). Nice blueberry finish to the bouquet.
This beer needs to sit open for hour before drinking just as an aged wine would. Flavorso are blended with pungent blueberry and the hot chili on the finish. A little creamy on the mouthfeel.
Suggestion is to definitely sit on this beer for many years. I've tasted it over the last 4 years a bunch of times from my other bottles I had and it is finally tasting drinkable.