Marry Me In Rio
Amager Bryghus 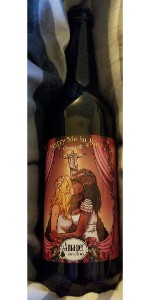 Notes: Collaboration with 2cabeças
View: Beers
Reviews: 3 | Ratings: 4 | Log in to view all ratings and sort
Reviews by macrosmatic:

Reviewed from long-standing notes. I failed to note the date of review, but it's been a while for sure. Poured from the 16.9 oz. bottle into a Cigar City Brewing goblet.

A: Hazy gold, with a half-finger of white head that fades away quickly. A fairly low amount of visible carbonation after the initial blush during the pour.

S: Malty sweet, some caramel and sugar, and some citrus hops.

T: Bready and sweet pale malts, a mild generic fruitiness. More citrus rind, resin, and herbal hops. This actually finishes with a fair amount of hop character...certainly out of style.

O: I'm confused...this doesn't seem to be a cream ale at all. It's not a bad APA, though certainly not a great one. Or maybe more like a hoppy American blonde or something. So...about 1.5/5 for style? But as a beer to drink, it's fine. I'm gonna rather ignore the style issues here - it's decent and inoffensive, but nothing I'd go after again. But if you're looking for anything resembling a traditional cream ale, look elsewhere.

It pours a clearish pale gold with a very healthy head of foam.

What a taste. Everything I mentioned smell wise...bitterness level is up there. Melons and a peculiar spiciness don't please my palate. Rough drinker.

Aroma is citrus hops and earthy/sweetish malts. The flavor is fruit/citrus, biscuit/earthy malts and a mix of bitter, dry and slight tropical fruit in the finish.