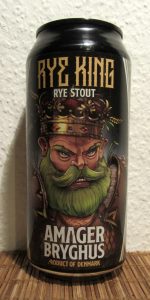 Pours jet black with a full one finger deep mocha colored billowing creamy head atop.Chocolate over top of earth and spicy rye in the nose.Roast and char upfront on the palate with some mildly sweet chocolate and the smoked rye really lingering nicely in the finish.The smoked rye flavors son't punch you in the face but lend a nice mild complexity to a very nice beer.Well done.

Impressive to look at. Dark like tar, but can great looking head that settles to a full film and leaves handsome spotty lace. Sweet up front with a bitter finish. Smoky, a little chalky. Some chocolate and ash. Really mostly an ordinary thing compared to other stouts. Handsome to look at. You'll want to be a fan of the style to get the most out of it.

500 mL bottle from the LCBO; served at cellar temperature. Can't find a bottling date, but I bought this roughly 7-8 months ago, so I wouldn't doubt that it's nearing a year of age by now.

Pours inky black, with 2 cm of foamy, brown-coloured head settling atop; it takes another five minutes for this layer to recede, leaving behind a sticky band of lace just above a creamy collar as it withers. The aroma is rich and malty, with cocoa, rye bread and dark chocolate aplenty, flanked by lesser notes of roasted coffee beans, molasses, and a mild yet unmistakable smokiness. The alcohol is pretty pungent, too, but it works.

I quite enjoyed the first sip, though I'll admit the taste wasn't as intense as I had been predicting after a minute or two of sniffing it. Spicy rye bread is the centrepiece, though there's also a fair amount of chocolate and molasses on the front end, as well as a suggestion of figgy dark fruit. The smoked malt asserts itself by mid-sip and lasts on through an earthy, moderately bitter finish that includes notes of coffee grounds, licorice and herbal hops before winding down into a moderately boozy, smoky aftertaste - this aspect won't be everyone's cup of tea, but it's what sealed the deal for me. It's too bad that the medium-weight mouthfeel didn't quite click - the carbonation is extremely sparse, barely registering on the surface of the palate, so the overall texture is kind of watery and tepid. Still it drinks very nicely, with the 7.7% abv integrating nicely into the profile, never being much of an obstacle at all.

Final Grade: 4.1, a worthy A-. Amager's RyeKing is a great beer, one that I would pick up again if the opportunity presented itself. A fuller body would've really helped this one out, but I still found it to be a very nice offering in spite of that minor drawback. For transparency's sake, I'll mention that I positively love rye beer, and that fact is definitely affecting its grade - without the rye, it would be an above average stout at best. Amager has yet to disappoint - the exchange rate can make their stuff a bit pricey, but I find it always ends up being worth it.

Tastes of chocolate with a light smokiness, soy sauce, and a hint of sourness from the rye mash. Umami, and tobacco come through as well.

Excellent brew, more like a stout to me, but more drinkable and enjoyable, in my opinion, than many high ABV imperial stouts. Got in Bracebridge, drinking in Muskoka Dec 3rd, 2017.

Pours a deep brown almost black with a thin pinky's worth of head. The head breaks quickly leaving a nice ring of bubbles around the outside and some lacing. The smell is roast malts, some smoky leather and a hint of treacle. The taste is much like the nose with the roasts dominating at first but then there are elements of cocoa, vanilla and then the rye spice. Feel is full with a good carbonation.

I like this beer. From the nose to the feel it just hits the right spots. Great on a cool Thanksgiving.

Appears that Rye King has been brought back by Amager, at least for a limited time. 500 ml bottle purchased from the LCBO for $6.45 CDN. Served fairly cold into my new Chimay chalice.

Appearance - Black and thick, near engine oil in viscosity. A deep tan head is poured and sits on top looking frothy. Reddish hues in the head or maybe that's my imagination. Modest retention and a little stick lacing.

Smell - Roasty malt, plenty of booze, some spiciness from the rye. Subtle bits of molasses and licorice as well. A tiny bit of cherry goodness too. well rounded and moderately complex.

Taste - Initially not a lot then the roasty, near ashy flavors come through. Major bitterness and a leather like quality. Earthy bitterness to close.

Mouthfeel - Slick and dense, there's an astringency from the big hop presence on the tip of my tongue. Not chewy but certainly a fullness to the body. Carbonation isn't heavy and there's a not unexpected warming in the back of my throat.

Overall - A pretty good stout, plenty of rye throughout with spicy flourishes and while certainly a sipper, this is one of those beers where the ABV is not well disguised, and actually feel like I'm drinking 10-12% ABV, which while being drinkable doesn't go down as easily as many other stouts. That plus the cost, means that I'm unlikely to buy another while on shelves.

From a 500ml bottle served semi-chilled at 13 degrees Celsius into a white wine glass. No dates on the bottle.

Look: The beer pours an opaque jet black with cola highlights. No head, nothing, nada, zilch. Regardless of the missing head I love the beer's oil-like appearance. Third attempt, a pour as vigorous as you can imagine with uncomfortable distance from the glass. I managed to rouse 2cm of dense, mocha head that settled to a partial film in 3+ minutes. The lacing is still poor but the beer managed to redeem itself some.

Smell: Moderate strength and leaning towards sharp. Roasted malts at the front with an enticing hint of smoke. Faint chocolate and coffee with some dark fruit. The nose doesn't stand out but its very good with pleasant layers.

Taste: Intense and bitter with more punch than the aroma. Fabulous range of roasted malts with notes of chocolate, coffee, and smoke. Dark fruit and a spicy character also make their contribution. The finish is long, strong, and bitter with some minerality.

Feel: Full body with mild carbonation. Heavy in the mouth with a delicious chewiness. The alcohol warming is smooth and balanced.

Overall: A very good beer with moderate complexity and surprising subtlety for a smoky rye brew. I think it falls short of my expectations and doesn't quite compare to Nogne O's Imperial Rye Porter. Having said that, it still holds its own and certainly gratifies my taste for a strong stout. Try it!

As usual, I have to state that I like my stout with character, with a twist. This wasn't enough of a deviation and therefore it's not really for me. A regular stout is just not my thing. Yes, there is the rye and I seem to notice jasmine, but neither make the taste stand out.
Dark as night, lovely, slightly retained head and a decent nose, this will remain a one off, unless someone presents it at a get together. I doubt that will happen though.

This is still brewed, new bottles are in retail shops.

Brownish black with chocolatey mocha foam, a fingers width or so, and a small amount of spotty lacing.

Aroma is lightly roasty and vaguely floral. Taste is roasty with a moderate lingering bitterness in the aftertaste. Hint of toasted marshmallow, resiny green bitterness. Creamy and smooth, medium bodied. Overall it's pretty nice though there's no sign of the smoked malt.

A: The color is black while the dark brown enormous head is compact and takes a really long time to settle. The lacings are great.

S: Hard roasted malts (barley) together with a healthy dose of rye. Strong black coffee. Some dark dried fruits, but modest and in the back. Dry.

M: Aftertaste holds burned bitter notes, and lasts for some time. Body is full, while carbonation is on the milder side.

O: This one I liked, the rye together with the hard roasted, almost burnt dark malts surley made this an interesting beer.

The brew is very dark brown, almost black, a brown high head that leaves loads of lacing and curtains.

Little carbonation, a soft and sticky texture, a good body and a dry long finish.

Very much imperial porter in this, not the pepper rye tones I had expected. But not bad at all.

A: Pours a dark brown liquid with a bit of haze into the glass. The head is biscuit colored with large bubbles in uneven sizes. The head disappears quickly and leaves thin lacings on the glass.

T: Some hints of wine with a dry taste of cacao beens, burnt malt, dark roasted coffee and caramel malts. There is definitely almonds a the end.

O: A very well balanced and good beer. I will definitely try it again if given the chance.


RyeKing from Amager Bryghus
Beer rating: 87 out of 100 with 38 ratings