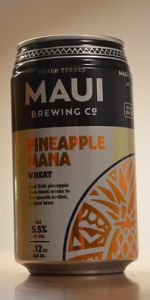 Pours an unhazy golden yellow with very little head. The nose is a tad yeasty, I would like more, with some faint pineapple in the background. The flavor is thin. Mostly pineapple. The mouthfeel is too thin as well.

Overall, very drinkable. Interesting. Due to ABV and refreshing taste you can definitely have a few of these.

Brewing with pineapple juice apparently results in a beer that looks like pineapple juice. A chunk of yeast the size of a tennis ball came out the can, but no physical remnants of it show in the glass, however, the beer has, despite being bright, a completely murky complexion as result. Fruit juice not only ruined clarity, it also seems to have killed off head retention.

The pineapple juice can be vividly smelled; it is fruity and acidic but also a little bit rank, as if they used fruit that was too over-ripe to eat. It also seems sugary enough to induce diabetic shock and has a prevalent, pleasant, almost ginger-like zest. You're getting what you paid for; if you're a fan of pineapple there's nothing to complain about.

Would it be too obvious to say that Mana Wheat tastes of pineapple? Probably. But the fruit doesn't exactly run away with the flavour - the taste of pale malt (an almost white bread level plain dosage of it) takes firm hold on the tongue, formidably holding off some of the sugar onslaught. Hops, too, are vaguely noted, helping contain all the acidic sugars.

Wheat lightens the beer and ensures maximum refreshment. Speaking of top notch, the carbonation should be lowered a rung or two; this can was under as much pressure as a well shaken can of spray paint (as the grenade-like 'bang!' hinted upon opening). The finish is sugary, no doubt, but also features that savory, zesty powdered ginger flavour.

I didn't much enjoy the (few) pineapple beers I had had to this point, but I sure did enjoy Mana Wheat. It's as refreshing as a pre-moistened toilette and is a solid example of a style that is so often predictable and underwhelming. While a bit middling, it benefits from the same high-quality craftsmanship that characterizes all Maui Brewing beers.

A: The beer is a light gold color, with a large foamy white head that fades slowly and leaves a thick lace on the glass.

S: The aroma contains fruity citrus, wheat, some spices and a touch of hops.

T: The taste starts out sweet with strong citrus flavors of grapefruit and tangerine up front. Then some breadiness comes in from wheat and a hearty but not too heavy malt character. The hops presence is very mild and brings a decent balance. The after-taste is sweet.

O: A little tasty, goes down easily, not too filling, mild kick, good representation of style, this is a decent beer to drink for a while.

12oz can into a Kloster Andechs weizen glass.

Pours well, with a cloudy, goldenrod-peach body that's rife with carbonation and sporting a well-retained cap of eggshell foam. Aroma is very grassy, with lots of wheat playing a supporting role, but the big draw for Mana Wheat is the pineapple notes. Lots of citrusy pineapple sweetness pairs with scents of pear and, oddly enough, cranberry.

Each sip is smooth and slightly sweet with a husky mineral note in the finish. The wheat is mellow, which allows the sweet & tart acidity of the pineapple to flash across the palate mid-sip. Mouthfeel is superb: creamy-smooth with just the right amount of carbonation. The thin body is amazingly drinkable on a hot Texas day without feeling overly watery. Overall, a tasty wheat from Maui Brewing Company...definitely glad I have another five cans!

The smell is of chunks of pineapple with a wheat tang.

The taste is of wheat tang with a shot of pineapple juice. Semi-sweet finish.

It has a refreshingly smooth body. with the carbonation a bit on the aggressive side initially.

An American Pale Wheat with a strong pineapple character is what it is.

Smells fruity. Distinct pineapple note with a slight glacé edge. Touch of cinnamon-laced pastry and strudel on the malt, very mild sweet spice. Bit desserty and could use more edge. Pleasant, though.

Taste is a bit tart and noticeably oxidised. Some caramel malt notes but quickly turns damp, raisiny but gets some lightness from pineapple late-mid. Finishes short but some nice light spice notes on the back. Would be interesting as a hefe with stronger wheat notes. Feel the pineapple dominates esp round the mid and some more yeasty spice or fruit esters might provide some interesting contrast.

Some more beery edge underlying could really make this pop. Pleasant summery Mauiesque drop, but feel it could really be an intriguing beer if consumed fresh, as it's well crafted.