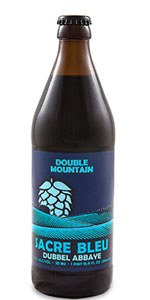 Appearance- Pours up a good amount of head that pretty much has almost no retention. The head is a very light beige while the body is a chestnut brown that appears as a mix of dark amber, crimson, and maroon when held up to the light. No lacing.

Nose- Starts off as a mix of banana, cloves, and Belgian yeast and spice (little bit of coriander). Settles down to a really warm and rounded banana, both in the bottle and the glass. A hint of caramel? A bit of honey? Faint esters of raisin in the background. Swirling only serves to show an even smoother banana note.

Taste- Front starts off reflective of the nose and pretty much flies with it. Not exactly the dubbel that I wanted (it seems to me Westmalle is an exception to the rule) but still a decent to pretty good beer. Predictable notes of bananas, cloves, and spice flavors. Some coriander. Not much else at the moment. Some cinnamon notes, pepper at the back of the throat. Very close to a trippel. Some hints of bandaid or medicine notes from the clove phenols but it's a little bit of a reach. Matches with a slight woody bitterness that hangs around the edges. Pretty good but at some points the balance seems to waver. Above average to good. Seems a little hot but it may actually be from the mix of cloves, coriander, pepper, and cinnamon. Doesn't really seem alcohol. Touch of chocolate in the background as promised. Good presence, fairly complex, but balance that lacks at points. Above average to good, but mostly good. I haven't been terribly impressed with Double Mountain but this is a pretty solid interpretation of style (or at least one aspect of it) and efficient beer to boot.

Mouthfeel- Between light and medium bodied with a good bounce and light carbonation. There's some zing to it if you drink it too quickly but it's pretty smooth if you don't.

Drinkability- Pretty accessible and pretty easygoing. I don't know if I would pay this much for a local dubbel when the Belgians are a bit better. Still, this is a good take. 5 bucks for a 500 mL of a competent abbey/dubbel isn't bad.

Overall- Pretty much a solid beer that shows the use of Chimay's yeast. Fruit esters (some bits of apple and raisin) start to appear after some time and show that this is a competent dubbel. Nothing outstanding but reflects well on Double Mountain. Definitely worth a try.

500ml bottle bought from "Lifesource" in Salem OR $4.99 Pours a murky darker brown with a huge ,attractive creamy tan head. Caramel,plums,banana,clove and touch of Halls mentholyptus in the aroma. Taste is much richer chocolate cake soaked in rum and dark fruits,some clove and banana in the back..nice stuff. Nice mouth feel, thick yet smooth and with a long after taste..slight alcohol but its fine. Very nice dubbel here.

Poured from 500mL bottle into a tulip.

Appearance: rich, dark amber hue which shines bright red when held up to the light. There's no haze in this brew. Head is two fingers of frothy tan foam. Really, I think it's quite attractive.

Smell: lightly malty with a bit of a bready character, plus a fair amount of phenolic funk. Reminds me more of a BSDA than a dubbel, but still quite nice.

Taste: phenolic right up front with quite a bit of band-aid character. A little caramelly toward the end with a nice finish, but overall there's too much band-aid and bubblegum in this one for me.

Mouthfeel: the texture on this is outstanding; medium body with a giant carbonation yields a big, smooth creaminess.

Overall: I just wish everything about this beer was as good as the mouthfeel. It's not a terrible beer at all, but be prepared for the bubblegum that builds steadily on the palate.

Poured into a Great Divide tulip. Pours a quite dark red brown with a half finger off-white head with good retention and lightlacing. Aroma of biscuit and light bready malt, Belgian yeast and lots of winter spices; cinnamon, clove and allspice. Would pass as a winter warmer. Flavor of biscuit, almost toasty malt, hints of chocolate, Belgian yeast. Very spicy throughout dominated by clove, cinnamon, coriander; peppery. Finishes semi dry with residual bitterness from non-herbal hops and the earthy spices. Medium bodied with mild creaminess. The Belgian yeast is noticeable here, but this is more a Belgian dark ale than a dubbel as it is not that fruit oriented nor that sweet. It is complex and flavorful, but the flavor profile, like the aroma is completely in winter warmer territory for my taste. The dark malts are very prominent and add make this unique for a dubbel inspired ale. Not sure I'd get this if in the mood for a dubbel, but will definitely revisit this for a flavorful winter seasonal beer. These guys do a great job.

Tasty dark stuff with a distinct Belgian bitter yeasty edge. Interesting aroma of straw and dark caramel. A touch of licorice in the nose. Appearance is quite attractive with the fine-grained white foam on the dark coppery amber brew. Pleasantly sudsy in the mouth.

Quite dry but with a large malty presence. The dry quality makes it seems less like the typical Belgian abbey brew. Bold but austere. Some hints of licorice and figs. The finish is quite bitter and a little metallic. It tastes like more hops than the 35 IBUs claimed on the label, but the yeastiness is quite prominent.

An interesting and different kind of Dubbel. After some sipping it gets so dry and bitter I am more convinced that a little sweet fruit would help out the drinkability. From the 500 ml bottle purchased at Beverage Warehouse near Marina Del Rey.

Pours a thin head on a black body.
The aroma is dark fruit, mostly plum and blackberry.
The taste is also plum with some mild pine bitterness.
The texture is softer with moderate carbonation.
It's an enjoyable drink, though it's missing the complexity to take it to the next level.

Pours a clear reddish-brown with a foamy khaki head that settles to wisps of film on top of the beer. Small dots of lace slowly drip into the remaining beer on the drink down. Smell is of toasted malt, spice, banana, and slight dark fruit aromas. Taste is much the same with burnt toast, caramel, and banana flavors on the finish. There is a mild amount of toast bitterness on the palate with each sip. This beer has a lower level of carbonation with a slightly crisp mouthfeel. Overall, this is a pretty good beer with a burnt toast quality that somewhat overpowers any other characteristics, especially in the taste.

a: murky brown with hints of red and amber. 2 finger fizzy off white head

t: much more robust than the nose. leather, nutty, and figs right away. something almost smokey in here as well, with a mild noble hop presence. the caramel/toffee presence is there, but a little thin. finishes with something like tobacco and figs. this is a little more bitter than your normal dubbel, which drops it a few in my book.

m: medium, a little on the thinner side. medium amount of carbonation

o: its interesting because its more nutty and earthy/leathery than i'm used to in a dubbel - which i'm digging. however, i think there is too biter. its not dominant, but it distracts enough from the fruity malty flavors that i enjoy in a dubbel that i noticed. overall, i'd say its pretty average

A: medium-dark. Cola-like. Crystal clear. Thin foamy head.
S: Belgian phenolics. Banana. Plum. Aromas are present but not overbearing.
T: banana. Clove. Cola. Cross between California ale yeast and an abbey ale yeast. NW Belgian? Definitely a gateway Belgian because of the toned down yeast characteristics. Interesting.
M: high carbonation. Medium body.
O: good beer. I like it, but the toned down yeast brings the rating back a little.