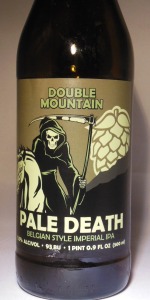 Notes: Open the Fourth Seal and partake in the luminous pungency of dank tropical forest. Aromas of ripe kiwi, mango, and pineapple consort with the coriander and orange peel of the Ardennes yeast. A noticeable bitterness hangs in balance with a hint of malt sweetness hiding in the vast, pale orange foundation. And yet, it finishes dry for a beer of this formidable stature. “And I heard a voice in the midst of the four beasts, and I looked to behold a Pale horse, and the name that set on him was Death, and Hell followed him.” (Revelations, Ch. 6)

Really had a hard time drinking this. One of those brett strains I just don't care for.

Pours about a finger of head into my pint glass. The head is white, and looks pretty standard, not really creamy or pillowy. The body is orange with hints of yellow, clarity is very high, especially considering it's a Belgian style. Chunks of sediment are here, as well as a whole lot more at the bottom of the bottle. Not the tradition sediment in the form of yeast sticking to the bottom of the bottle, which you would swirl to get out, but literal floating chunks. Aside from the sediment, this beer looks nice. Looks like I’ll get some nice lacing, but we'll see.

For being such a flavorful style, the aroma is not huge. I get mostly this candy banana sweetness. Very faint clove, and what I would consider a traditional Belgian yeast aroma. Initially when I popped the bottle, I got a few little bready notes, but I don't really smell that in the glass. Very clean smelling. Not a lot in the way of hops going on. Even though it's a Belgian style, it's still an imperial IPA, with 88 IBU's, you'd think that'd come across in the aroma. Anyways, nice aroma, but nothing amazing. Needs more complexity.

The flavor is much the same. Almost mineral tasting and watery to start off, with a small banana/yeast flavor. Finishes with a small sweet/booze flavor, kicking briefly with a little lingering banana. The booze flavor is minimal, but unwanted. Again, not really getting anything in the way of a hop profile, or even bitterness for that matter. It's simply not complex enough; the desired flavor is too light, and doesn't hit for long enough; and it's slightly off style considering the lack of hops. Overall not bad, and I won't mind drinking it, but I've had much better.

The mouthfeel is ok. As stated before, it has a bit of a mineral feel to it, whatever I guess. The carbonation is medium-low, but it lively enough. Body is fine. It works for the style.

The drinkability is pretty good. That booze flavor is getting more subdued. It's 8.5% and you don't get any heat. A little booze flavor, but no heat.

Overall this beer is fine, it's kinda "smoothing" out as it warms, but it still doesn't have the flavor profile to be a super killer Belgian imperial IPA.

The appearance turned out really nice, awesome lacing from top to bottom. The head was completely gone though. The sediment is a little perplexing, considering how clear the rest of the beer was, and the lack of yeast at the bottom of the bottle. I’ll let the sediment slide, this is a very nice looking beer. The head was a little generic looking, but it's been a while since I've had a beer that's given super awesome lacing, so I'm feeling generous, 4.5

The beer pours a deep copper color, slight chill haze with soapy, 2 finger, white head that has good retention and leaves a nice amount of sticky lace behind. The aroma is a bit puzzling, lots of cheesy belgian yeast, pale grain, sweet, sticky clove, sappy hops with some light fruit, perhaps apricot or peach with some grapefruit. It is really unbalanced, funky and just downright unpleasant. The flavors are similar, but slightly better. Much more emphasis on fruit, grapefruit, tangerine, peach or apricot with lots of yeasty clove before pale grain and sweet malts, odd bitterness and some pine, and unpleasant cheesiness really take over the finish. The body is nice, juicy, coats the mouth well, resinous, and has a creamy, soft finish.

Verdict: A bit of a mess to say the least. The aroma set the stage for a rather unpleasant session. I had a hard time drinking more than a few ounces, and ended up drain pouring this bottle. Perhaps the yeast strain used could be changed, perhaps the hop mix, perhaps the grain? Not really sure, but as it stands, this is a beer I'd recommend skipping.

On tap at PreFunk. Soft, dull pour, musty, funky aroma. Taste comes in with lots of grapefruit, but still allows the Belgian yeast to poke through the tartness. Lingering tangy feel.