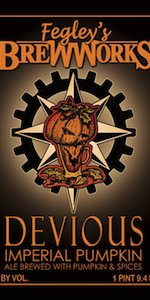 part of a flight at good ta go friday night.

brownish body with orange tones, not much of a head, faint lacing

Nose is of pumpkin spices, as you would expect.

Taste is all about the spices, doesn't seem to be much behind it.

This was poured into a tulip at a bottle share last month. The appearance was a nice looking bronzed orange color with a thin slim quarter finger white foamy head that quickly died off. Barely any lacing. The smell had a strong big authentic pumpkin with a delicate ginger spice and a light vanilla rolling through. The taste copied the smell and carried a nice sweet pumpkin but a delicate ginger spice that I really liked. On the palate, this one sat about a medium on the body with a good sessionability maybe leaning towards the sipping quality. The carbonation was extremely smooth and good. Overall, what a nice imperialized pumpkin ale. If I lived in its distro, I’d probably be buying this all of the time. Good stuff.

It is always an exciting occasion when my local, in-person trader, tone77 stops by for a drop-off & pick-up. I never know what gems he might be bringing me, but the latest one revealed this one. Yay!

From the bottle: "Family owned and operated. Brewing award-winning beer since 1998."

I Pop!ped the cap & as has become my standard, I employed a very gentle pour. Once in the glass, though, it was fair game & so I gave it a vigorous in-glass swirl to raise a brief finger of foamy, fizzy, light-tan head that could not wait to fall away to wisps. Bye! Color was Coppery-Brown (SRM = > 17, < 22) with NE-quality clarity. Nose smelled deeply of nutmeg, cinnamon & allspice. I could really get behind this, especially in the Fall. I will readily cop to be wildly behind in my drinking of bottled beers, but it is still chilly enough, even in early April, to make this a welcome drink. I have been a fan of Pumpkin beers since their inception, although I realize that it is more the spice(s) that drive them than actual pumpkin. It's okay by me. This was very spicy, especially with cinnamon, but there was also nutmeg & allspice present. Finish was dry & spicy, but I would have it no other way. I am now beginning to anticipate the Fall of 2017 & the return of such beers.

Poured from a brown 12 oz. bottle. Has a pretty, dark amber color with a 1/2 inch head. Smell is of spices, pumpkin. Taste is spices, malts, light pumpkin, some hints of alcohol. Feels medium/full bodied in the mouth and overall a good quality beer worth trying.

This one's a slightly hazy honey-copper with a thin collar of creamy head.

Kind of has a fruit-cake thing going for it in the flavor, with molasses, spices, and dark fruits. Just imagine if gramma got to baking a few months early and grabbed some extra allspice and nutmeg. Well packaged flavor profile! A lot of these are a cacophony of flavors, while this one manages to meld together into something neat. Well done!

Feels present and dense, but thankfully clean. As the presence dissipates, it reveals a bit more of the spice.

I was caught off guard by this one. It seems to be really well put together and pleasingly balanced.

Fairly low spice and a nice example of a pumpkin ale.

This is a great pumpkin beer

Very smooth, subtle taste of pumpkin that's not overwhelming. One of the best imperial pumpkins out there.

Found at the candlewyck in buckingham pa