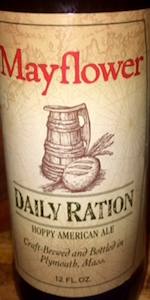 A - Straw colored, slightly hazy, no activity, soapy head that is gone quickly and has no lacing.

O - it’s ok, but the sweetness makes a sessionable beer not as sessionable as I’d prefer.

Pours a hazy pale golden straw. Light aroma of mango and pineapple. There's some nice sweet red onion and green onion, with a touch of pine. It's super dry and extremely quaffable. For a session/pale ale, this is what I need.

This was poured into a becher pint glass. The appearance was a semi-hazy yellow color with a one and a half finger white foamy head that dissipated at a decent pace leaving a rocky white cap of a head with semi-thick white foamy lacing, nice show! The smell started off with sweet grassy hops sliding into sweet citrus rind and a dry floral quality. The taste was semi-bitter and dry with the sweetness from the grassiness boosting the citrus and floral qualities to become pretty dry on my tastebuds. On the palate, this one sat about a light on the body with a fairly decent sessionability about it. Carbonation runs fairly light with the dryness coming back and pouncing on my tongue adequately. Overall, decent for what it was, maybe again.

It's not a splashy beer but it has some solid fundamentals. It's decently hopped but it doesn't half much more taste outside of that. Found this to be just okay.

Pours a slightly hazy very pale stare in color with 2 fingers of soapy white head. Aroma starts very herbal and earthy but then adds some nuance with grainy, lemony, and pine. Taste starts grainy then adds light lemony notes before turning overwhelmingly herbal. The body starts light but then adds a bit of heft and turns more medium with a frothy carbonation throughout. I just can't get past the overwhelming herbal notes in the aroma and flavor; I'm not a big fan and it keeps me from enjoying this beer.

Rather tasteless, plain brew. I understand where they are trying to go with the name and the style of a daily ration like in puritan days. I would choose mostly any other beer from this maker over this one.

Pours yellow orange and ends with a monstrous and lasting off-white froth. Smells of grain, lemon, white grape and faint pine. A combination of light fruits and faint bitterness play off each other all the way through to the fairly dry finish. Light in body, and not as hoppy as the label would lead you to believe, but lively drinking nonetheless.

Passable beer with no obvious flaws, but nothing to make it stand out in a very crowded Session IPA market.

Lacking any tropical/juicy - or even pine - flavors most expect from an IPA nowadays. Just a slight bitter taste, not much else going on.

Hazy yellow pour with a modest white and lasting head.

Still a decent floral and tropic hop presence on the nose with biscuit malts underneath.

A slightly biscuit malt sweetness followed by a bitter floral, pine, and tropical hop finish. It still had character but I wish I had not forgotten it was in my fridge and had it 6 weeks ago.

A- Pours out of a 12oz bottle into my wine glass with a rather hazy golden yellow body. The head is thick and creamy and rises up just past one finger with very good retention. Thick blankets of lace atop the glass with plenty of drizzle after each sip.

S- Floral, grassy hops immediately up front in the aroma with zesty citrus, lemongrass, herbal and orange tones coming along with that. Pale crackery graininess with the yeast staying clean.

T- The general theme carries over from the aroma with a bittersweet mix of lemon, oranges, lemongrass, grapefruit and floral hops in the foreground. Mixed throughout are hints of apple peel, herbal, spicy and pine hops, light stone fruit and raw two-row barley.

MF- Very creamy, almost chewy especially for the style, overall texture to the medium body. Carbonation is rather high but it suits the flavors and lands smoothly thanks to the consistency. Herbal bitter lingering finish.

Citrus and floral hops lead the charge in a lusciously bodied APA that is smooth yet has a bitter edge. A good effort from an under-appreciated brewery in some circles.

Super light, crisp, very dank, some citrus. Very dank. Bitter, dry, medium finish. Personally, if this had a little more sweetness, it would be awesome. As is, it's pretty good.

Bottle from Bert's
Slightly hazy deep straw color with a frothy white head that persists. Earthy citrus on the nose with a hint of bread. Slight mineral water flavor along with a grapefruit citrus zest earthy flavor. Decent enough pale ale with a great nose.

Surprising. Pours golden yellow with little head. I enjoyed the hoppy/citrus aroma with a bit of wheat funk. Taste is mellow. You get the hops on the back end in the middle of the mouth. Very clean tasting. Smooth for a lager. An overall very good beer.

Taste brings nice crisp ale character, almost lager feel, crisp mild malt, just a touch of pilsner straw like malts, but a little thin and watery almost. Hops dominate, grassy mostly, floral as well, like noble and American blend again, grassy floral into a spicy component, little spicy tea like, grassy almost earthy herbal but not very herbal, a little fruity lemony notes, lemongrass. As it finishes it dries and turns very bitter, herbal spicy grassy hops with a huge bitterness, more than I expected esp for a pale instead of IPA, nice hop profile but just way too bitter on the finish. As it warms a little musty pith comes through, orange rind like.

Mouth is lighter bod, a little thin, nice carb though.

Overall it started nice, good nose, nice malt but wish there was more, hops started nice but got way too bitter on the finish, not a fruit or citrus bomb, a nice grassy spicy slight herbal hop profile that is enjoyable aside from the overwhelming bitter finish.

Aroma is of strong biscuit malt not much hops.

T: follows the nose; flavor fades at the end - you're left with a long lasting moderate to highly bitter finish;

O: I like bitter beers, but there has to be some flavor to balance that out - this one was lacking in the flavor department;

Poured a cloudy lemon-yellow color in a Brooklyn Brew House glass with a 1F head.

The taste is GF and citrus with an excellent hoppy, bitter finish.

This is a light bodied beer, and I especially enjoy the finish which counterbalances its light body.
A pleasure to drink, and lots of flavor for a 4.5% ABV beer.

A: The beer is a light gold color with a thin white head that fades quickly and leaves a thick lace on the glass.

T: The taste starts out with a good burst of grassy hops bitterness. Then some mild sweetness comes in from flavors of citrus and caramel. The malt character is thin but provides some balance. The after-taste is slightly hoppy.

O: A little tasty, goes down ok, not too filling, mild kick, good representation of style, this is a decent beer but there are others in the style that I would choose first.

Bottle. Pours a pale, hazy yellow. Thinner, white head. Like the look. Aroma is West Coast, bitter, citrusy and grassy U.S. hops. Almost get more grass than most. Some cereal malt. After a few sips, I looked up the bitterness and was stunned to see it was 25 IBU. I found it to be fairly bitter. My West Coast designation in the nose may not be all too true. The flavor has a fairly unique quality to it. Quite grassy. Some lemon and other citrus. Mostly soft, bready malt. Dry. Light bodied. Bubbly. Pretty good but lacks some of the flavor intricacies that many of the best sessions have.

Had on tap. Taste is grapefruit, light citrus--lemon, and a touch of malt. Very bitter for the style. The body is also lighter than usual for the style. Probably worth a try for hop heads, but it lacks the balance that I associate with my favorites in the style. For me this is a pass.

-Good looking "straw" colored brew.
-The stank was mainly "piney" hops.
-Good amount of carb at first, then the piney hops, & finishes quite dry ... which beckons another sip.

Not a bad offering from a great brewery (imho).

A fun and light feeling but boldly flavored American pale, session type, perfect for summer. Very pale in color, hazy yellow, almost looks like a wheat beer, heady and lacy, with very little body and tons of carbonation. Interesting cereal complexion to the grain, dry but biscuity and dry, perfectly built for the hops. A mix of grassy and bitter hops on it, with leafy freshness and hints of lemon in there. Maybe so e euro and some new world strains in combination. The cool thing here though is that the grain comes back last, even after the hops on the finish, like Cheerios. Maybe even a hint of rye spice in there too. Very drinkable with such a low abv and light body, refreshing carbonation, but really pretty intensely and uniquely flavored. Mayflower has impressed me a lot in the few beers of theirs I have had. Quality stuff here for all day drinking.

Hazy, green-hued colored straw yellow. Some spots and some streaks for lace.

Daily Ration from Mayflower Brewing Company
Beer rating: 83 out of 100 with 90 ratings