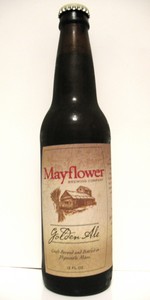 Appearance: bright, clear golden color; serious carbonation; a one finger frothy head that slowly settled and kept about 1/4 of it's body; good lacing

Mouthfeel: light, clean, and crisp; nice carbonation, but not too ticklish; very enjoyable; almost no stringency

Overall: Exactly what I would expect from a golden ale. I typically like a more robust beer, but sometimes I want something light and crisp. This is what I'm looking for at those times. This would be perfect on a warm summer day after mowing the lawn or just hanging out on the porch with friends.

Bright, shiny golden color, actively bubbly with a head to show for it. A mild spicy, fruity, minty edge of hop aroma meets a light biscuity grain for a pleasing nose. It might have a lighter body, which is fine for the style, but the malt goes above and beyond, at least up front. Dry with a big biscuity tone. Hops jump in the balance with a spicy herbal flavor and slightly sharp bitterness. A hint of shortbread and herbal hop in the dry finish.

Style-wise, Mayflower amped it up enough to bring it from potentially mundane to a killer session ale.

"I am glad my ancestors arrived on the Mayflower, but I am gladder that there are nine generations between us."

Sun-splashed goldenrod with lemon zest borders. The parchment colored crown is as soft and as pillowy as they come. It looks fantastic from its creation onward, and does a good job decorating the upper reaches of the glass.

The aroma is wonderful as well, which is anything but a given in an American blonde ale. What sets it apart from most is a fresh brightness reminiscent of meadow grasses and a small shot of citrus peel. Galena and Liberty hops are the responsible parties.

Golden Ale falters a little on the palate, but only a little. Given the ABV, this would make a damn good session ale, as long as you don't need a ton of flavor and complexity. It might also tend to fade into the woodwork if consumed with food. It's still good beer, however, in the sense that it's well-crafted and extremely drinkable.

Pilsner and caramel pilsen malts are used, but only the first is appreciated. One might think that 18 IBUs are too low to matter. One would be wrong. Hop flavor (lemongrass primarily) is fairly prominent and there's just enough back end bitterness to keep things semi-crisp and tight.

The body/mouthfeel easily passes muster, especially when the ABV is taken into account. It's light, without being thin or watery, and is properly bubbled. Definitely above-average for the style.

Mayflower Blonde Ale is a pretty impressive beer from a brewery that I hadn't heard of prior to my trade with damienblack. Thanks man. It's a good drinker that *almost* earns the next highest flavor score. Bottom line: as solid as Plymouth Rock.

Special thanks to Chris at Bella Vista in Philly for sharing this rarity in these parts.

Beer pours a very fluid golden clear into a thick Cantillon glass. A very airy, frothy 2-finger white head settles into an almost nonexistent cap for the rest of the drink. No lacing. It's clear this beer is well attenuated and crisp.

The aroma is light and crisp with a strong aroma of malty biscuit flavors. Light hop bitterness to keep the aroma crisp and refreshing.

Taste is refreshing and light. Flavor is full of malt flavor but with very little if any sweetness. Light fruit notes come through in the middle and then subtle bitterness follows through toward the finish.

Mouthfeel is clean, crisp and refreshing. Strong carbonation moves thr beer fluidly throughout the mouth and makes for an even more quenching drink.

Nice. Definitely a nice session beer on a hot summer day. Will look for this one in the future.

Not a huge fan of blond or golden ales, but if anyone can do it right, it is Mayflower. Appearance is impressive, as it showcases a clear orange/gold with one finger worth of white heading. Smell is not overly assertive, mostly some clean grain smells along with some biscuit, and mild floral tones. Taste has bright grain flavors, hints of honeycomb, nice bit of earth as well. Mouthfeel is light, and perfectly balanced. The malt interacts with the hops in an awesome way. Drinkability truly shines with this beer. It is light and overwhelmingly refreshing, while still maintaining quite a lot of complexity. Looking for a session beer to pair with a snack? Forget the lager with beer nuts. Try this with some salted pumpkin seeds; the pairing is terrific. Outside of their India Pale Ale, this is probably my favorite offering from Mayflower. If you see it, buy a sixer or two. Cheers

Thanks goes out to jwc215 for this one.

Pours a nice slight haze golden yellow color, nice carbonation, nice little fizzy white head, with some minimal sticky lacing left behind. The nose is malty, with some yeast, and spices. The taste is sweet, malty, slight yeast, and some spices thrown in. Medium body. Drinkable, this is not a bad brew, tasty.

This isn't a bad blonde, but not one of my faves either. The beer has a slightly sulfury, somewhat perfumey aroma, that is offset somewhat by citrus notes. The beer pours a nice clear golden with a white creamy head that dissipates pretty suddenly. The taste began somewhat creamy, but was interrupted by a sharp peppery, spicy, tart hop flavor. This is not a particularly crisp beer, but the spices make it more biting and crispy that is probably warranted. The beer is modestly carbonated, has a bit more of a stinging aftertaste than I typically like. But it isn't a bad blonde either. There is an astringent, tart, pepperishness to the beer that is just too much. Not heaps of malt presence either, but that is to be expected with a blonde ale. Not bad, worth a shot, but I wouldn't return to it either.

A: The beer is a deep good color, with a short white head that fades slowly and leaves a thick lace on the glass.

S: The aroma is of fruity citrus, light malts and a decent amount of hops.

T: The taste is pretty well-balanced with flavors of lemon and spices up front, which is quickly followed by a moderate hops bitterness. The malt character is thin but exactly what you'd expect from the style. The after-taste is slightly sweet.

D: Tasty, goes down very easily, not too filling, mild kick, good representation of style, this is a nice lighter beer that is worth pounding several of, especially since it's a little bit more flavorful than most in the style.

Tastes malty up front, with light hops. Very earthy but crisp and refreshing. Slight yeast taste in the after taste.

Very drinkable, light, and tasty. A new staple for my beer fridge in the summer months.

Thanks to jcwattsrugger for bringing this back for me from New England.

The smell is of light grain - some husk. Pretty clean.

The taste is of light sweetness with a chalky, mild non-descript dryness. Bland, with a salty-ish, slightly bready, mild aftertaste.

Not crazy about the slightly salty, seltzer-ish aftertaste, though it is brief. Drinks okay, but one was enough (unless it were the "only thing available". Bland.

A - Poured out a clear, fizzy, golden-yellow color with a foamy, white, three-finger head that left minimal lace.

S - It smelle of caramel, grains and grasses.

T - It tasted of sweet caramel and a touch of bitter grassiness.

M - It was crisp and sharp with a smooth feel. A light bodied ale.

D - This is a good ale. A nice sessionable summer brew.

Pours a clear, pale orange and crowned with two-fingers of airy white froth. Carbonation is going wild. Light fruits such as pear and orange along with faint grain to the nose. Fruity, sweet and bitter in the all the right places. Light yet flavorful. I won't fall into the trap of over-describing a beer like this, so just trust me, it's damn good.

Bottle from a mixed six from PH Provisions on my way out of town at the end of June. Not feeling the promotional angle, but for the most part, I enjoy their brews.

Pint glass pour. Half a glass of meringue head over a clear & deep chardonnay body.

Smell has a heavy touch of clove upfront. Muddled lemon/banana phenols. The bready malt just hinting at the back.

Not really my thing, but a pretty clean brew. :)

pours a two plus finger head with a bright hazy golden color. slightly muddled nose with aromas of grainy/bready malts and notes of hops. pretty clean smell all around. great crispy bready malt flavor up front, quickly followed by a nice balance of hops. aftertaste is clean and quite refreshing.

a good session beer. i always get a couple of sixers of this stuff during the summer. a great "gateway" brew. similar to Cisco's Sankaty Light

I got this beer in a trade with corey0212, Thanks Corey!

L - clear, light golden yellow color with a fluffy white head that left sheets of lacing on my empty glass.

Had this beer at the brewery during a brewery tour. Pours a nice white head and a very clear golden body. Smells sweet and somewhat metallic. Nice sweet malt flavor. Very light and spritzy mouthfeel. Very drinkable, not my favorite style but a very good representation of it. I would certainly go for this if I want something mid winter as a break from the heavy stuff.