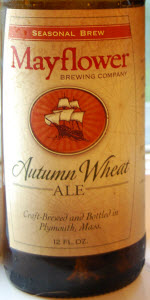 L: Red/Brown color with ruby on the edges. Head settles down , leaves very little lacing. Very attractive color though
S: Toasted malt predominates, with aroma of toffee and cereal grain. Hints of wheat and the common hefeweizen esters as well.
T: Once again malt is predominating. Though it is classified as a wheat ale it tastes like a marzen that somebody splashed a bit of hefeweizen into. Definately not a bad thing though, the beer tastes great. Similar to the aroma, tastes of toffee and cereal malt, as well as a touch of banana bread on the finish.
F: Light in body, for the most part. Smooth and refreshing, Medium carbonation
O: At first, thought this beer was kind of bland, but as my palate adjusted the subtleties and nuances of the beer came through, it proved to be a great beer in both flavor and enjoyment. Not my first go with this and certainly won't be my last.

Appearance: Pours a dark brownish ruby with a big foamy tan head. Lots of lace. Looks great in the glass.

Aroma: Smells of wheat, burned toast, and a little hint of coffee or chocolate. Some hops, too.

Taste: This beer has a tasty profile with a malt-forward base and hints of chocolate, dark wheat toast, a little caramel, and some floral hops.

Overall: I like this beer, and this brewery. One of my favorite fall seasonals of this year. I'l drink anything that says Mayflower on the label.

Really good nice and toasty with a zing to it.

A great October beer, this is not over the top pumpkin or all-spice or cardamon. Worth a drink for sure.