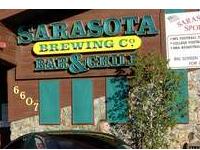 Just to start, WOW! What a great brewery! While visiting Sarasota yearly now and staying in Siesta Key, the Sarasota Brewing Co. was not a far drive for an unbelievable experience. I enjoyed this venue twice in January 2011.

The atmosphere was perfect for this type of brewery testing. The music was right on and great staff and locals to help with the vibe. Wouldn't change anything except for the horrible Kansas and Oklahoma table covers on the tables :)

Quality you ask? Great! Not quite the classiest place you've ever been to, but we are talking about a Brewery in Florida. What do you expect? Tuxedos and coat service? I don't think so. Nice tavern feel.

Service was beyond wonderful. We had a server named Rita who clued us in immediately with the specials, great beers., and top picks for food. Very friendly and quick service as well.

Decent selection. There were 6 beers on tap we were able to choose, and I enjoyed every last beer in Pints (except for the Sarasota IPA in a Liter).

Food was spectacular! Here is what we ordered: We started with their Buffalo Wings and Nachos. Very exceptional. Then I ordered the Italian Beef Sandwich and this really nailed it with a pint of the Sunset Red Ale. They complimented each other greatly. Their original Beer Battered Fries were great as well.

Very cheap if you go during their Happy Hour (M-F= 3-7 with specials on their beers). A great place to visit if living around the area or even visiting. Will be in again thanks to the wonderful service and great beer! Hope they brew new beers for us!
A+

There beer is horrible. Have some taps to help out.

My wife and I stopped here for lunch and beers on a Monday. We arrived just as they were opening so it was not busy. (It didn't get much busier later when we left either.) The place is located in a strip center along a busy street. Parking is available in a lot at the front. The interior has the vibe of an old neighborhood bar, a bit dark inside, and the smell of the place kind of matched that description. Several TVs were showing sports programming. Since they were not busy we had excellent service.

There were five beers available, so we ordered a sampler flight so that we could try them all. There were also 6 guest taps that included two craft beers, a Guinness, two mass market ciders and a Bud Light. The house beers were brewed to their respective style, but there was nothing exciting about them. We gave an overall score of 3.5 to them. The only negative note that I wrote was that the porter was a bit too hoppy for the style, but maybe that's the way the brewer likes it.

The food was good, but nothing to write home about. The place is worthy of a visit, but I wouldn't travel too far to visit this one.

Old school brew pub, multiple rooms, seems a little dark and cramped for my likes. 1/2 dozen of their own creations on taps and a few quality guest taps. Typical bar food including good wings. Worth a stop if in the area...expect friendly service, kinda noisy athmosphere, decent beer and grub, but nothing awe inspiring. Decent go to kinda place, nothing fancy, but decent.

Classic pub, old school feel, very home-y and comfortable. Reminiscent of your traditional neighborhood pub. Solid flagship with a seasonal rotating tap. Brew master is a super nice guy and very open to talking about his beers and other beers in general. A worthwhile venture for any BA in the area.

Sarasota Brewing Company is an interesting little place situated in a strip mall off of 41 below 72.

It's got a fairly strong "local" vibe to it with a seemingly solid line-up of regular patrons; and it's fairly interesting to look at although it's also kind of weird in a way.

The small 12 seat bar is the main focus as you enter, with some dining and a second bar around to the right. The main bar is wood with green padded-pleather along the edge to rest your arms on; and it's got a wood ceiling and back-bar, but there are ceiling tiles and ceiling fans surrounding that. Mugs hand above the bar, and along with the stone sections of the walls, it has an almost "lodge-like" feel. Perhaps it's had a past life as a Bavarian "beer hall" or restaurant? It's comfortable with an "old" feel, but the mish-mash of newer touches added in don't quite mesh and it's a little quirky. The only part of the atmosphere that's an actual drawback, however, is the odd smell that's part dirt and part cleaning chemical.

Neither the beer nor the food are outstanding, but both offer some interest and reward. Starting with the food, it's basic bar/pub food with a very slight edge at reasonable prices for the area, and there are some highlights: Mako Shark Bites, Seared Ahi Tuna, and Spinach Stuffed Oysters make good starters (let's not forget the wings, they're not the best but they're OK); and I'm not sure what the Chicago connection is, but the Chicago Italian Beef or Combo Sandwich are both nice, as is the Chicago Seven Pizza (and their other pies as well). On the beer side there seems to be a lot going on, and although not every beer hits the mark, the fact that there's such a rotation is nice. Would I like to see a better overall quality? Yes, but given the size of the brewery and the probable demand for the beer I don't foresee any 3-month-aged lagers in the future. And if you stop in during happy hour you can hardly complain about the prices!

In conclusion, it's not the best strip mall brewpub I've been to but it is one of the more memorable ones given it's local flavor and nitty-gritty charm. There's no flash, pomp & circumstance, or dreams of a Michelin star here - it's all real, and sometimes (usually for me) all you need is a basic meal with a not-so-basic beer.

Its funny when the brewer drinks at another bar. Beer isnt very good but the wings are great!

This was my second time here. I thought they had a little better variety of other taps besides their own the last time. I remember they had Lagunitas IPA the last time. But that having been said, this time they had have a couple of CCBs (Jai Alai IPA and I forget the other one). I had the local IPA and thought it was terrific. So good, I had another for my second. We had some wings to go with them and they were fine. It is a bit of a dated place, but very friendly with good service, lots of TVs for sports etc.

Have been here before but I have finally taken the time to rate a few beers and to put in a review of the place.

The place overall is a bit dated but I think the Old World European type feel is what they are going for. They have a nice bar areas with a restaurant area that consisted of booths and tables.

The service was good overall. I had the wings which were pretty good. Not a ton of sauce on them (I would have liked more) but they were served nice and crispy. We missed happy hour but they have some pretty good happy hour prices if you can drop in during happy hour.

They had six of their beers on draft. Their bottle list consisted of all macros (which is a huge let down). Their beers for the most part are average but the IPA and porter showed than can brew some pretty good stuff.

Gulf Gate Drive off of 41. I'll be frank with you - you should call for directions as it is just East of US41.

The entry opened onto a wooden statue of an old-time bartender with apron and braces holding a mug of beer in his left hand. The inverted, "L"-shaped beer was on a slight left oblique to the doorway with a "U"-shaped bank of padded benches fronted with standard tables and chairs. Lavs all of the way aft, left. On the right side of the space was the restaurant area with mostly benches and booths for seating. There was another bar on that side and a semi-circular ladderwell leading up to a small second floor. The brewhouse was off to the extreme right with a couple of wood-clad SVs behind the secondary bar. A private dining area to the left of the secondary bar fronted the FVs. Mug Club mugs hung from every horizontal plane. It reminded me of a 1980's sports bar, ala Sam's Saloon, but making their own beer, like in Windsor, Ontario. At least I got to watch some of the NYY/Bucs game while we visited. Est. 1989.

Beers: J's Hoppy Light Ale; Sarasota Gold; Sequoia Amber Lager; Midnight Pass Porter; Sunset Red; Maibock. The H. L. A. was the best of the lot - plenty hoppy for me. The rest were too sweet for my liking.

Old Prague Pilsner was out-5.0.

Mom Test: Nah. Too dark. Too bar-like. Nothing but sports on the monitors. That's not a good combo.

After visiting friends in Venice, we decided to take 72/70 back to the other coast again and stop by. We first couldn't find the place. SBC is a brewpub with character IMO.
We had two sandwiches and liked our food! Definatly a good choice before a 4hr drive and would stop again at any point. Could have a few less TVs maybe or at least take the stacks of Bud Light out of the bar. I was actually quite surprised to see so many BMC beers there. Good selection of their own and also some guest taps, i.e. Lagunitas IPA.
Before we left, I glanced into their brew kitchen and immediately a waiter came over and asked if I would like to go inside and look around - of course. Got a small quick tour. Definatly a very friendly place

Sarasota Brewing Company in Sarasota, FL
Brewery rating: 3.52 out of 5 with 117 ratings