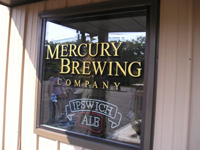 Serving 16 on tap beers of a good variety. There is both indoor and outdoor seating available. The food is similar to traditional pub fare with burgers, fried chicken sandwiches, and Flatbread pizzas. The food is good, though, just not fancy.

I've been here before where the place was hopping. In both cases, the service was borderline indifferent to efficient, but not very convivial.

4.45/5  rDev +9.6%
vibe: 4 | quality: 4.5 | service: 4.5 | selection: 4.5 | food: 4.5
Ipswich Ale is located in a small warehouse like area. There was plenty of both outdoor and indoor seating. The quality of the food and beer was excellent. The service was very kind and attentive. There was plenty of different beer styles to choose from and the food menu had many crowd pleasers. The food was excellent. I had the Thanksgiving egg roll special and the chicken sandwich....both did not disappoint. Must visit if you're in the area.
Dec 05, 2021
Rated: 4.5 by atlbravsrno1 from New Hampshire

Reviewed by Twal from Colorado

3.29/5  rDev -19%
vibe: 3.5 | quality: 3.5 | service: 3 | selection: 3.25
Recently visited the area after checking website for hours (closes at 11pm on weekdays) we walked in at 8:45 only to be told they were closing . Looked around and there wasn't but a couple people in there aside from the group on the way out as we walked in. I figured it was early in the week a couple days before Thanksgiving and business was slow ,no big deal.
One week later we returned about the same time as the previous visit , got in there and there was about 25+ people there within a half hour ( again 9pm ) the bartender was cleaning the place up and it was obvious she was going to shut the place down , cleaning taps, washing counters , etc.. The three of us asked for another beer and we were told that it was last call and she would be shutting down after this pour. I looked around and there were still 15-20 people in there an hour and a half short of their closing time..
Maybe they do better service in the warmer weather,I can understand closing earlier for the season in a small town like this but make a new schedule and post it,don't leave it up to employee's to make up your their own schedule much less decide to close up when there's a decent amount of paying customers in your bar.
Unfortunately the other brewery in town that was packed near closing time clearly states that they close at 9pm otherwise we would have returned to hang out there instead.
As for the beer, it's mediocre ,it certainly doesn't rise above the masses. It's close to the same thing I was buying from them in the early 90's which I guess would mean they're consistent however times have changed.

Reviewed by citizennsnipps from Massachusetts

Reviewed by hudsonvalleyslim from Massachusetts

4.13/5  rDev +1.7%
vibe: 4 | quality: 4 | service: 4.25 | selection: 4.25 | food: 4
As Ipswich has brewed many of my favorite beers for many years, I've visited the brewery (old and new) many times. The release events were always low-key and they were very generous with the beer. Today was my first visit to the Brewer's Table, the new brewpub. It looks amazing, very nicely done, the trademark tap-truck is the behind-the-bar beer engine. Windows into the heart of the brewery are everywhere.

15 brews on draft. Started with a special brews flight: Pilsner, iBelge, Revival & Dry Irish Stout, (4/$8) I had never tried. All were very good. Followed with a Smoked Helles and an Original Ale. Pints are $5/16oz. The burger was great, a nice salad was substituted for fries. And the service was excellent.

Took quite a while to get this operation in motion, but it was worth the wait.