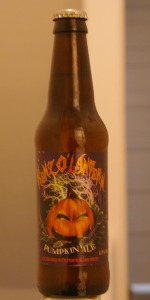 Poured from a brown 12 oz. bottle. Has a light bronze color with a 1/2 inch head. Smell is of spices, some pumpkin. Taste is a bit heavy on the cinnamon, there is nutmeg, subdued pumpkin, maybe a hint of ginger. Feels mediu/light bodied in the mouth and overall is a decent beer.

Maybe I am not a beer expert based on the ratings and reviews that I have seen of this beer, but this is one of my favorite pumpkin beers. Great pumpkin pie-like taste if that is what you look for in a pumpkin beer. Lots of spice and overall a great drink.

I don't know why I didn't trust the below reviews....big fan of PHL brewing's lineup...most of it at least...love my local brewers (Stoudts, Sly Fox...the newer one's are making elbow room!)...BUT, this is really funky; like a bad sour Belgian gone wrong in a pumpkin patch and, yes, there is a teasan-marianted-potpourri note as mentioned below. UGH.

Flat and murky in appearance; no head; watery mouthfeel; rotten pumpkin nose...and the taste delivers the worst of it all.

I certainly do NOT recommend this one....I do recommend Kenzinger, Joe Coffee Porter and most anything by this FINE brewery. The Fleur de Lehigh is best transformed into a 'shandy' (bitters and a splash of lemondade)

Received as an extra in a trade. Oh pumpkin ales...my least favourite style aside from Kvass.

A - A slow riser this one was, poured into my Duvel tulip a darker, hazy well...pumpkin hue with a thin quarter inch white head that fades almost immediately to leave a thin halo and thin cloud. The head is pretty bad, but, I really do like how this beer looks when its unfiltered. Much better than the usual crystal clear pumpkin beers.

S - Yep, pumpkin pie spice. At least this one has ALOT more ginger and nutmeg than the norm. That's actually a nice improvement.

T - Yep, this is a pumpkin ale alright...in that its a glass of pumpkin pie spice. Wish there was some real pumpkin flavour in here but nope.

O - Overall, this is a pumpkin beer...either you love em, or hate em. The rather intense ginger and nutmeg makes this one stand out of the crowd somewhat though.

I decided that this would be the year to review as many pumpkin-related beers as possible and so I have come to this guy. I am trepidatious, given others' reviews, but I also try to be as fair as possible. We shall see what shakes out.

From the bottle: "Dark and yummy". I am put in mind of some ex-girlfriends and the scene in "Young Frankenstein" when Dr. Frankenstein asks, "Hey, who's making the 'yummy' noises?"

An aggro pour has produced a fluffy finger of tawny head that is falling like a souffle after the oven door is banged shut. Good lacing is appearing in its wake. I can really smell the spices, and as one reviewer postulated, it does smell like potpourri! Color is an orangish-coppery amber (SRM = &gt; 9, &lt; 13) with a slight chill haze. Mouthfeel is watery and the taste is not quite right. By that, I mean that it tastes almost primarily of cinnamon sticks and nothing else. I am put in mind of a Home Ec thing we did involving soaking cinnamon sticks in hot water, but the purpose now eludes me. This had a slightly woody finish, so perhaps whole sticks were used in the boil, which I have seen done before, but with other ingredients added. This just seems to be a one-note, one-trick pony whose recipe needs to be either a) tweaked or b) S/C'd and rebooted. Survey says: No bueno!

i think some others have been forthright and on point...i won't waste my time dissecting this headless corpse. i don't mind so much wasting $11+ for this 6-pack. just thankful i didn't shell out the dough for a case of this junk. mind you, i love most of this local brewery's offerings. but this low ABV bottle of autumnal potpourri cologne simply smells like what a drunk pumpkinheaded creature would vomit up...the flavor is dry (screaming for some sense of balancing SUGAR or at least HONEY to be present)...it looks murky which is acceptable, but nearly no carbonation. much needed with this tepid brew. and the mouthfeel? flat, watery. worst of the seasonal pumpkin ales...and one of the worst brews i've ever had. bad. and i've only gone from mad. sad.

update: it's worse than ever. can't get past the pumpkin-vomit...

Wow they brewed this at session strength with extreme spicing? I am in!

A - Well dark on the label is correct but murky as well. A hazy amber brown is what I see with just a 1/4 inch of head that fizzes out rather quickly to a mild ring.
S - Wow I haven't smelled such strong ginger since Left Hands "Good Juju" but there is plenty of cinnamon and a rather dry dose of nutmeg. Mildly musky but overall just a spice bomb.
T - Wow its like biting into a scented candle! Mild musty pumpkin flesh meets an abundance of ginger ale like taste and finishes extreme cinnamon. I kind of hate it!
M - Again I haven't had such a watery pumpkin beer since well "Pumpkinhead" from Shipyard. With little carbonation it taste like flat homebrew.

Overall I guess I kind of expected mediocre and I have to say expectation met. I want to say they are better than this but only liking their big beers I have to say they haven't won me over with anything under 7%

I picked this up at Monde, enjoyed chilled in a Bass Pale glass from the 12oz brown bottle.

The color is very murky, hazed amber with a cap of white that compresses to a ring of beads. The smell is very spicy -lots of ginger evident with a cinnamon-like aroma with very light malt odor. The feel is spiced with moderately high carbonation and mild bitterness with a semi-dry warming finish.

The flavor is confusing it comes off pretty spice dominant with a taste like biting into fresh ginger root and a dry toast taste follows that with a light pepper-like warmth in the back of the throat. It doesn't have the sweetness to balance the spice so the alcohol seems more pronounced in the flavor than it should. Overall a bitter and dry highly spiced almost to the extent of potpourri which is not terrible, but if you drink this expect a lot of spice in the taste-to me the alcohol is a little too noticeable.

Poured from the bottle into a pint glass.

A: Dark amber color. One finger head quickly disappears with barely any lacing
S: overpoweringly nutmeg and spices, to the point of unpleasantness
T: again, spices kill any chance of other flavors. Nutmeg and cinnamon with a faint lager finish. No pumpkin here!
M: weak body with medium carbonation. Left me feeling empty after a sip.
O: More of a spiced lager than a pumpkin. Spicy flavors overpower anything more complex in this beer. Can't say I'd buy it again.

Poured into my glass, looks like a brown apple cider. Cloudy, no head, no lacing. Smells like the perfect pumpkin pie. Tastes like it too. Wish it had more fleshiness to it. Nicecly carbonated. Overall an ok brew, spice a little over powering. Probably won't purchase again though.

Kenz-O-Lantern, poured into a pint glass. Immediately, I'm worried. No real evidence of carbonation. It has the color and look of apple juice; darker and murky and muddy brown. A terrible-looking beer.

Smells of rich autumnal mulling spice. Star anise, clove, cinnamon, and light nutmeg. It has the impression of pumpkin pie spice, but light on the pumpkin. Malty caramel malts with a gooey-ness in the nose. Almost non-existent hop character.

It's refreshingly dry, but overly spicy. Clove and cinnamon takes off with notes of allspice and star anise and mace. Watery flavor doesn't speak much of maltiness. Smooth husked grain wort and almost no caramel leftover after the aromas. Hints of apple. This is a spice-water concoction with some fermentables and alcohol present. I can't really speak highly about this beer, in any facet. Nearly abominable.

Yep. The feel is damn-near atrocious. Flat and petered-out. Watery body makes the attenuation of flavor that much worse. Definitely some inconsistencies in bottling, as my girlfriend's bottle had carbonation, more aroma, and a spittting bitterness that I liked. The wateriness is still a problem. Loaded with spices, and nearly without flavors of pumpkin meat. They could've at least dialed up the caramel, or conditioned it a little better. Rough stuff.

Been waiting to get my hands on this. 12 oz into a standard pint.

Smells STRONGLY of cinnamon and nutmeg. You pick up some dark malts too. 4/5

Tastes, again, strongly of cinnamon and nutmeg. If that is your jam, you might well love this. Pumpkin flavor takes a backseat and the spice overload gives it a pumpkin pie quality. I like it. 4.25/5

I'd call the mouthfeel medium light. It kinda goes down a little watery. Could be a session pumpkin? Probably the "worst" part of an otherwise quality beer. 3.25/5


Kenz O'Lantern from Philadelphia Brewing Company
Beer rating: 78 out of 100 with 63 ratings