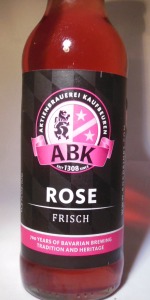 Rated by OzmanBey from Massachusetts

Reviewed by BeerAdvocate from California

Beer mixes are becoming a big buzz though the Radler style has been around since at least the early 1900’s. They’ve taken their Edel and blended it with a natural lemon based soda that dons an odd pink hue, hence the name Rose. The beer character is there, even a faint noticeable alcohol within the lemon soda flavor. It works if a much needed departure from the usual or looking for something that won’t rock you after a few.

3.58/5  rDev +23.4%
look: 4 | smell: 3.5 | taste: 3.5 | feel: 4 | overall: 3.5
Poured into an Euler stange. Pours a light to medium apprpriate rosy pink with a light pink head with good retention and lacing. Aroma of berry fruit, light citrus, soda like with only a hint of malt. Flavor is light grainy malt combined with soda-like berry and citrus. Light bodied with active carbonation. Tastes like what it is supposed to be, a combination of carbonated fruit drink and light malt beverage. I picked this up along with a few other lagers from this brewery new to my area. Not my style. Too sweet and not enough beer character for my taste. I know from friends that there is a big market for these soda like malt beverages, and this is well made and might appeal to that market. Interesting to try, but not to my taste. I'm rating this a bit higher than I would for a "fruit/vegetable beer" category because there is no category here for radlers, of which this is probably a good example.
Apr 05, 2015

Appearance: well, as the name might suggest, it's pink. A very pink beer indeed. There's no haze and a light-to-moderate effervescence with a finger of pinkish-ivory foam. I guess for a fruit beer it's acceptable.

Smell: there's a lemony citrus character with perhaps a bit of grapefruit, along with a definite hibiscus type aroma. There's a hint of grain underneath, but mostly it's like a lemon shandy. It's ... OK.

Taste: the taste is really what you'd expect based on the aroma, although the lemon isn't tart and there is kind of a pop sweetness. This borders on alcopop although it definitely has a grainy, malty, beer-y undernote. So for that, it's OK.

Overall: it is more-or-less what one would expect from pink beer. That said, it is better than an alcopop -- just.