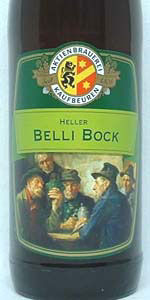 Rated by tbeq00 from California

Pours a 1cm, pale white head composed of smaller bubbles with larger ones interlaced. Fades quickly, but no lacing. Body itself is fairly hazy, opaque, and butterscotch or caramel colored with yellowish highlights. Carbonation is only visible from the top due to the haziness, but does display a bit.

Scent is predominantly sweetness from the malt, but when cold also has a few fruity esters, particularly of cherry very old banana. As it warms, a subdued breadiness and apple cider aroma wafts out. Overall, the scents are a bit weak and if possible, could be a bit more pronounced.

This beer features a heavy malt influence, sweet, but not darkly sweet like a doppelbock. Opens brightly with subdued, but still bright sweetness as from a bosc pear, then transitioning to some bready characteristics, weak cinnamon and nutmeg, and apple cider flavors. Ends with a slight, but lingering hop bitterness linked to the cider-like flavor and some breadiness. Taste improves substantially as beer warms, particularly just below the cellar temperature point.

Mouthfeel is medium-sized, not too heavy or too light. Carbonation is noticeable, but actually perhaps a bit too undercarbonated for the weight of this beer. Finish is quite dry, with a bit of stickiness from malt.

I enjoyed drinking this beer, and it would be a fine helles for any time I'm desiring the style. The malt, bread, and baked apple character were particularly pleasing. The aromas could have been better, but were forgettable with the taste. Carbonation was almost there, and may be just right in another bottle. Definitely one to pick up.

The beer pours an impressive solid gold color with fair head retention and lacing. The nose is impressive, showcasing considerable sweet malt. There is very much a honey, candy corn and baked apple aroma in this beer. The flavor profile replicates the nose very closely in this rich, fairly sweet beer. This beer really delivers a considerable amount of flavor for a helles bock, and the finish is long, clean and rich. Drinkability is good, with the alcohol very well disguised. You get a sense of fairly high alcohol, but it really isn't apparent in the flavor profile.

Hmmmm.... I really liked this beer, though as rich and malty sweet as it is, I can see where it might not be for everyone. It's not something I can imagine always being in the mood for either, though today it goes well with some football on TV. Not bad at all...

Reviewed by femALEist from California

Crystal clear pale yellow with a dense white head, made of large. The head recedes slowly, leaving some lacework. I have to say this is a good looking beer.

I served this beer at near cellar temperature, and that allows the richness to shine through. While not a style I typically consume in large quantities, I can tell that it's well done - it's got an intense bready sweetness, a mild bubblegum character with some spice (definitely some cinnamon sugar and some mace). Rather fruity with a bit of fermenting fruit character, with sweet cider apples and pears. While sweeter than I care for, this still is a good beer.

The palate opens with a combination of estery fruitiness with ripe apples, pears and a moderate bready character. Not particularly wheat-like, just rich and full, like a hearty loaf, mildly spiced with some mulling spices. A little alcohol appears on the back end, but this is really good stuff. Not as sweet as I thought this would be, there still is some light caramelized sugar characteristics to this beer, especially in the mid-palate.

Medium in body with a moderate level of carbonation, this is great on the palate. Mildly creamy, and a sweet-yet- drying finish with a touch of alcohol and some fruity character and some spices.

At nearing 7% with an intense fruity and spicy character, this isn't the most drinkable beer out there. However, this one 500ml bottle is going down easy.

Reviewed by Zorro from California

An OK bock, but sort of a weird one. Blond color and bock beer taste. Tastes more like a Strong Lager though.

Reviewed by pmcadamis from Illinois

3.79/5  rDev +8.3%
look: 3 | smell: 4 | taste: 4 | feel: 3.5 | overall: 3.5
A - This lovely bottle shows a motley crew of five scruffy old dudes playing a game of cards and looking generally mischievous. This pours a hazy dull peach color that looks more like peach flavored iced tea in the light, and is topped with a solid finger of crackling beige foam. Head retention leaves something to be desired, and the lace is pretty but doesn't really stick.

S - The aroma is doughy and yeasty, like the way a doughnut shop smells at five o clock in the morning when they are baking the treats for a day of business. Some really sweet caramel and nougat notes are there too, along with a very gently citrus note. This smells very thick and sweet, but I can pick up a small hint of alcohol and citrus that balance the nose.

T - Oh yeah! That's good stuff! Super sweet yeasty glazed doughnuts, Charleston Chews (nougat filled long skinny candy bars), caramel, cookie dough ice cream, and a distant suggestion of orange juice. This is a malt bomb that tastes like it has a large portion of wheat in the mix. The glazed doughnut sweetness, along with a banana-orange juice flavor make this almost seem like a hefe on 'roids.

M - Full bodied with a good amount of heft and sugar, the sparkling carbonation and sprightly orange zest notes help keep this out of the "cloying" category but this is a very heavy brew. The finish is sweet, yeasty, and fruity... like a well aged banana that has started to blacken. This doesn't feel as boozy as it is (6.9%), but there is a little warmth after swallowing.

D - This is WAY to heavy and sweet to have more than one, but it is a good brew that is definitely worth trying. I keep thinking that this is the chubby bastard offspring of a union between a yeasty hefe and a malt-bomb Oktoberfest. Whatever this is, its good.

Reviewed by jsh420 from Illinois

overall - i am just starting to get into this style. but after drinking this only make me want to seek out more

Reviewed by JohnGalt1 from Idaho

1" head has decent retention and some lace.. but it's nothing special.. the brew is perfectly clear straw....

Nose is very clean pale malts and little else.. some subtle sweetness... but the aroma is all very clean maibock... Smells very very fresh.. Like a buddy's homebrew.

Flavor is again everything a Maibock should be.. smooth pale malts with just touches of some cookie sweetness.. hop bitterness is very fine with only enough spicy hops (I could be imagining things) to bring the malts back out in front... Oh so smooth.. and perfectly clean.... Fantastic... Very fresh for bottles from Germany.. The body is medium with a nice carbonation that makes me want another sip almost immediately..

I love a great Maibock.. and as far as I can tell.. this is the only one I get in Boise.. Very nice.. and again.. This is fantastic for the style, and I am a critic of crappy/old brews from across the Atlantic.

Reviewed by mmmbeer from Massachusetts

3.03/5  rDev -13.4%
look: 4 | smell: 3.5 | taste: 3 | feel: 2.5 | overall: 2.5
Half-liter bottle, with 02.06 on the back. It pours medium gold, with an inch of white head that leaves moderate lacing. Smells of overly-sweet malts and noble hops, but it gets a bit better. Lemony and grassy hops on the palate, with some toasted malts and a big malty sweetness. The body is a bit too heavy, tingly and numbing, with a short finish. Before I reviewed this one, I noticed that TheLongBeachBum thought it to be similar to their maibock. Having had these two beers in two consecutive days, I believe them to be the exact same. It's really not too bad, even with the weird, tingly mouthfeel, just make sure to drink it nice and cold.
Dec 06, 2007

3.03/5  rDev -13.4%
look: 3.5 | smell: 3 | taste: 3 | feel: 3 | overall: 3
Presentation: 1 Pint 0,9 fl.oz. (500ml) thin, slender brown glass bottle. Has a neck, obverse and reverse labels which all have a light green background. Main label has a picture of some old dudes playing cards over a few beers. Above this, and on the neck label, are the words Heller Belli Bock in dark green text are set into a light green banner The reverse label has this listed at 6.9% ABV with an inkjet coded date of 02.06 which I noted when I picked this one up, I purchased this from Hollingshead Deli in Orange, a respected outlet, so I guess this is a Bottled On rather than Best Before Date.

Appearance: Yellow hue with a pale straw and golden colored body. Soft white head rises as quick as the Third Reich but history repeats itself and it soon dies away. Carbonation is low to middling, though it has enough strength to regenerate the head with a firm swirl.

Taste: Simple cross-section, the DNA is very Teutonic. Hard to differentiate this from the hundred or so other Germanic Helles that I have tried over the years. Grain is balanced and eventually overtaken by a sweet malt presence which dominates the finish. Nothing to detract from the basic components but nothing much beyond them either.

Mouthfeel: One of those brews that plays it cards all at the same time. This has enough carbonation to keep the light toasted malts and honey sweetness from becoming cloying.

Drinkability: The finish starts to become a little too sweet in the long run, at first, when heavily chilled it has a nice floral aspect and lightly toasted malts to balance, but as it warms, even a few degrees, the sweetness is too dominant.

Overall: I have tried many of the Aktienbrauerei Kaufbeuren brews to date, but this is a new one on me. I have to confess to thinking out aloud that this is maybe a relabeled brew, or at least based very closely on one of their other offerings. It seems very similar to other AK brews, perhaps the Maibock. Keep this one well chilled and its not bad, but it is not that enticing as it warms.