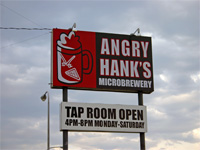 Rated by LXIXME from New Mexico

3.64/5  rDev -4.2%
vibe: 3.5 | quality: 3.5 | service: 4 | selection: 3.5
checked out the location in the old part of town, cool little spot converted from a mechanics garage it looks like. an open layout with tanks exposed and about seven beers on, give or take. the server was nice, informing us of our montana state law three pint limit, weird. they had some conventional offerings, a nice oktoberfest, a massive ipa, and an imperial red that were all cleverly done, maybe a touch on the amateur side, but ambitious enough to be interesting to me for sure. no food, but the popcorn was tasty and free. interesting crowd in here too, from bikers to blue collar folks to housewives all enjoying a pint, love the mix! prices were also very fair, just three bucks a go for all the regular strength brews. i didnt love love any of the beers i had here, but they were all decent too, i certainly would stop in again next time up in billings. ill also have to check out the new location. a good place to stretch your dollars and take in the local vibe, something for everyone on the beer list.
Oct 01, 2012

Reviewed by ScottFromWyoming from Wyoming

3.21/5  rDev -15.5%
vibe: 4 | quality: 2 | service: 3 | selection: 4.5
Got into a conversation with an employee at Costco and asked about the brewpubs in Billings... there are 4 in the downtown area so I asked about another one I hadn't been to. He said it was great but that Angry Hank's beers were more traditional and he liked it better.

I like the setup described well in other posts. Nice afternoon, we found a table outside and enjoyed ourselves there. Service was hampered somewhat by a birthday party, and we had the bad luck to be standing behind a few people who were getting growler fills. When we did get to order, the IPA had run out so I chose the Imperial Red, my wife chose the Brown Ale. I saw that they were pulled from different taps but they were the same. Identical in every way. I can only assume there was a keg-labeling error.

The beer itself was unremarkable. Okay, not great, a 14oz pint if I'm not mistaken. Didn't feel like sampling another selection so we took off.

The place isn't on my "never again" list, but I won't seek it out as my first choice.

Reviewed by GClarkage from California

3.34/5  rDev -12.1%
vibe: 3.5 | quality: 3 | service: 3.5 | selection: 3.5
Happened by here with a friend last year. About 6 taps on hand at the time. I believe I had the witbier and the IPA when I went. Both were decent and at a pretty decent price. Atmosphere was a bit loud as it's a old renovated garage with an open air wall facing the street. Brewing equiptment can be seen in the room you are drinking in. Didn't try or see if they had any food. They did have free popcorn for the customers though. It seems pretty crowded on a normal basis as I have driven by it several times. Worth a try if you are passing though.
Jul 01, 2008

4.08/5  rDev +7.4%
vibe: 3.5 | quality: 4 | service: 5 | selection: 3.5
As I approached, the place was wide open and by that, I mean that all of the garage doors that opened onto their wood-fenced patio were open, as well as the front door, plus a Quiet Cool industrial fan was going to keep the baking summer heat to a minimum. I was greeted by owner and brewer Tim Mohr, but he did not seem angry at all, nor was his name "Hank", unless I was much slower on the uptake than usual. Actually, the place was named for an eternally angry gent from Tim's childhood, just in case anyone was wondering.

It really was not a brewpub in the strictest sense of the term, but more of a tasting room. That was all right by me, though. I've done some memorable drunks in people's garages before and this was just a bit more unique. The best part was meeting another "Woody" whose given name was also John. Holy coincidence, Batman! He was a Viet Nam-era Marine and the two of us sat and shot the breeze, making snide remarks about the other's branch of service, much to the chagrin of his family, with whom he was travelling.

Beers: I had to skirt Montana's 48-ounce per person, per day law by getting six half-Pint pours, something that they normally do not do. Usually, you get a maximum of three pints and are asked to move on. Anger Management Belgian-style Wheat (4 %); Pasty White Boy Cream Ale (made with corn, no secret - 4.0); Angry Hank's Blonde (4.0); Street Fight Imperial Red (6.5); Dog Slobber Brown (5.0); and Head Trauma IPA (6.0). I skipped the Dirty Girl Dunkel Weizen in order to stay legal. In keeping with the theme, my notes read, "Mad flavor and mad props, yo!" Ha ha.

Reviewed by loren01 from Washington

4.44/5  rDev +16.8%
vibe: 4 | quality: 4.5 | service: 4.5 | selection: 4.5
Angry Hank's is located between the Yellowstone Valley Brew Co. and MT Brewing CO. making for a good little pubcrawl. Located in a small old service station/garage, looks as though they brew in that location as well. Outside the garage there is a small patio in the parking lot. The selection is quite impressive based on the lack of room/small amt of brewing equiptment at the brewery. They usually have 6-7 different beers on tap at any time. Beer quality is very good, I would say much better than that of Yellowstone Valley and right up there with the quality of Montana Brewing, for sure worth a stop if you are ever in Billings.
Sep 09, 2007
Angry Hank's Microbrewery in Billings, MT
Brewery rating: 3.61 out of 5 with 50 ratings