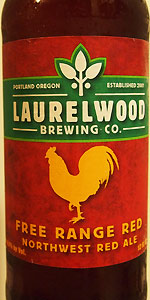 On tap at the Tacoma Craft Brew Festival.

Outstanding brew from a brewery that should fly higher above the radar than it does. Plenty of body, plenty of heft, yet quite easy to quaff in a session. Perhaps the best beer of the entire festival - buy it.

I purchased this at Barley Mow, poured chilled from the 12oz into a willybecker chilled.

The color is deep crimson with slight haze and 3 finger ecru head with varying sized beads with suspended floating matter and great retention with thick lace sticking with visible carbonation throughout. The smell has a strong malt odor with floral hop scent and slight berry-like yeast ester with an almost meaty malt toasted woody aroma slightly citrus hop accent. The feel has a semi-thick body with light fruity texture and slight sweet middle with mild sweetness and slight toastiness.

The taste has a great malt quality and citrus tropical juicy hop flavor with light malt sweetness and raw hop bitterness with semi dry finish. It seems to have more balance directly after the pour and as it warms the bitterness becomes more apparent. This is a very good red ale with nice hop flavor and light fruit from the yeast coming through in the flavor with ruby red type hoppy yet quaffable taste-pairs well with blue corn chips and guacamole

A decent hoppy beer but lacking in the malt expected of an amber or red ale.

An excpetional beer enjoyed on a camping trip down the Oregon Coast from a growler purchased at one of the brewpubs.
A nice looking beer that smells and tastes even better. Lots of cascade hops all around, but not too much as I have had in a few beers lately. Very enjoyable and easy to drink. One of the best beers I have had and really with I could get my hands on some more often. They have just started to bottle it, but I think still generally for the greater Portland market.

pours a clear amber-orange with a small yellowish head, and good lacing.

smell is of grass, malt, and hops.

taste is nutty, malt, some grain, and caramel, ends dry and a little bitter.

overall one of the better organic brews i have had, didnt even notice the funky taste that is typical of organic beers.

bomber sent my way by genghis22 thanks James...poured into a pint glass..entered from notes

s-piny hops up front fall to a sweet caramel and toffee..slight bitterness in the nose

t-starts off slightly piny then the rich caramel and toffee from the nose step up...finishes on a nice crisp bitter hop note..

m-solid for the style...nice tight carbonation...a tad bit acrid on the tongue from the bitterness...

overall im not a big amber fan i find most of them boring but this one had a lot about it i liked..it was interesting and kept me coming back for more...glad i got to try this one..

On tap in a shaker pint.

Lots of caramel malt and general sweet fruitiness in the nose. That's about it.

A little more lively in the mouth, with some roasted, toasted malt, a bit of nuttiness and a nice citrus undercurrent to provide some contrast to all that sweet caramel. A slightly odd medicinal aftertaste. Medium bodied, moderate carbonation and a very sweet, sticky finish.

Overall impression: OK, but too sweet for extended enjoyment.

Being a local Portlander... I was waiting a long time to see a great Red. Always drinking Weinhards red when I was in a Weinhards kind of mood... this one stands out. Not a basic Red by any means.

Laurelwood amazes me with the brews. Where did they find the Brewmasters?

The color is rich and bold.. makes a statement. Makes you say "Oh boy, here it goes, a real Red".

Rich flavor, sweet but not overpowering. Laurelwood does like to make everything a bit on the rich side... but how do you make your unique notes really stand out?

Leaves my mouth a bit dry, but a sample beer platter works great after this with some friends.

Chilled bomber into a glass. Courtesy of end 0))) / [BA member ramnuts]. Thanks buddy!

A: Pours a clear reddish-orange / copper body with half a finger of off-white head. Moderate retention (a few minutes) that recedes into a thin film on the glass. Leaves moderate lacing down the sides as I drink.

S: Toasted, bready malt with toffee and caramel notes. Absolutely dominated by a malty sweetness. But wait! There is a grapefruit and orange hop component to this as well! They are serious about this red ale.

T: A strong malt backbone that splits into toast, bready, and toffee flavors quite readily. The mid-taste sees a development and dominance of sweet caramel malt, with the previous flavors taking a back seat. The finish allows grapefruit and orange rind flavors to shine through, with a just-barely-sweet finish that is contrasted by lingering citric hop bitterness.

M: Perfectly medium-bodied, with medium carbonation. Not so light that it feels unsatisfying, and not so heavy that you can't drink it. Well-balanced. Well-masked ABV, although at 6% I suppose that isn't hard.

D: An example of a high-quality red ale. Just fantastic.

Too hoppy for a red. Typical of NW beers. All hops.

Poured into a Seattle Beer Week pint glass. Pours a reddish coppery amber with a half finger light tan head with good retention and lacing. Aroma of caramel malt, red grapes, mixed fruit and citrus hops. Flavor is biscuit and lightly carmel malt, citrus and lightly piney hops. Finishes with a lingering grassy hop bitterness with light grapefruit rind. Medium bodied with good carbonation. A nicely made red ale, a bit more hoppy than most, but with a sufficiently flavorful malt body to support the hops. Nice balance between hops, caramel and biscuit malt. Well done.

Bold hop flavors dominate the first sip. Some roasted grain and a taste like Crystal malt. The hops are resiny and a little murky, which seems to be common with the Oregon hop mix from the numerous Northwest brews I've tried this fall. Decently balanced, however, between the bitter hops and the slightly malt taste.

Quite drinkable, full of flavors, and the tangy and sudsy mouthfeel is a winning combination. Label says ABV is 6.1%. From the 12 oz bottle bought at Hondo's Brew & Cork in Astoria.

Appearance- Pours up a good amount of head which appears to have pretty good retention. The head is a very light tan or beige while the body is a dark amber with hints of copper red which appears as a medium to dark amber in the light. Considerable lacing that shows sheeting in patches.

Nose- Starts off with a caramel note which seems as if it will define this beer. It is flanked by hop aromas of orange, grapefruit, and minor lemon. Mostly just caramel from the glass- the hop profile is more noticeable from the bottle. Simplistic but effective.

Taste- Reflective of the nose but shows much more of the hops profile. Starts off with a touch of sweetness that comes from both the caramel and orange notes. Hop notes pretty much cover the entire length of the flavor profile and consist mostly of citrus- orange, grapefruit, and lemon. Slight chalk on the finish which is a bit dry. Not much of a linger at all. Some pine and resin on the finish as well- this does have a little bit of a linger. There's nothing special about this beer- it's just an efficient hoppy red. Above average to good, probably closer to above average. No flaws but also not a beer that I'm really into as I've never been much of fan of amber/red ales. Light spice on the finish, think coriander.

Mouthfeel- Just below medium bodied with mild carbonation but a slight carbonic sting which matches well with the pine, resin, and slight spice of the finish.

Drinkability- Pretty easygoing and the hops are pretty well rounded and approachable. It think these run about 4 bucks a bomber so the price is good but the beer itself just isn't what I generally want in a beer. If I were to go for a red, I probably go for something from Lagunitas instead.

Overall- Above to good beer and a pretty standard representation of the style. I would give it a try- it won't wow but I doubt it will repulse most craft beer drinkers.