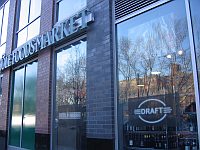 View: Place Reviews
Reviews: 50 | Ratings: 82 | Log in to view all ratings and sort
Reviews by DrJay:

I noticed the beer through the window while walking by and decided to stop in to see what was available. I was glad I did and now this is a regular stop whenever I head down to Katz's Deli.

They had a great selection of regional craft beers and many selections from across the US. Plenty of imports too. Lots to keep you interested as long as you're looking for regular releases - I didn't notice much in the way of special release or very hard to find beers. But that's fine. One of the best features of the store is the growler station where you have a choice of ~6 beers from the local region.

Service has been fine whenever I've visited. The only thing that's a bit unfortunate is the storage of some of the beer. Although there are several coolers along the back wall (which is good), some of the room temperature beer is stored against the windows on one side of the store. They've tried to block the sunlight, but it still makes me uneasy. That being said, I've purchased many bottles from that section and have never run across any problems.

I probably wouldn't make a trip here specifically to buy beer, but if you're in the area already it's worth taking a look. Especially for the growlers.

Nice beer selections, but also have beers strung throughout the store... that makes it a bit confusing as I noticed beer in at least 10 places.